This Tumblr Post About Extremism From Four Years Ago Goes Viral After Every Shooting. Its Creator Finally Explained It. 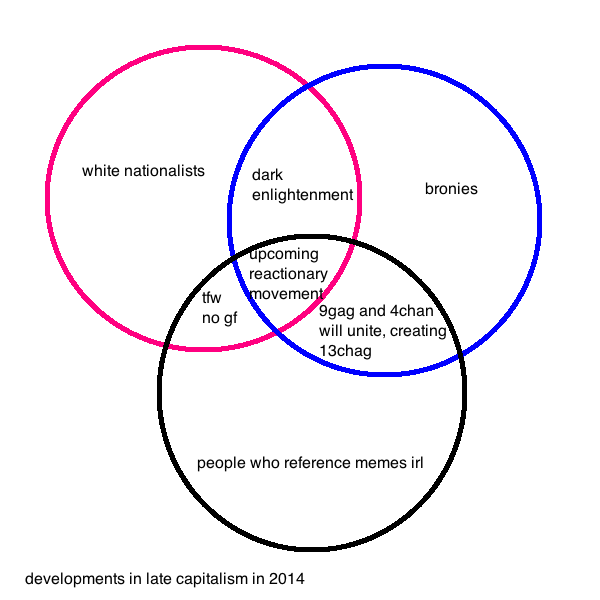 There’s an old blog post that circulates online every time another white man radicalized via the internet carries out a terrorist attack. The Venn diagram created by Tumblr user cryinwilson in 2014 has been credited with predicting Gamergate, the rise of white nationalism in the United States, the evolution of right-wing politics, and the entire sociopolitical environment since the 2016 election. I, personally, have shared it countless times over the last five years.

It’s known as the “Upcoming Reactionary Movement Venn Diagram” or the “13chag Venn Diagram.” It’s a bit silly, but also a little haunting. Like all good memes, it’s simplified, easy to share, and esoteric. But more than 175 people have been killed around the world in the last eight years by far-right extremists, who have carried out 100% of terrorist attacks in the US since the end of 2017, according to the Anti-Defamation League. In other words, the Venn diagram may explain the global rise of internet-fueled male-driven terrorism as well as anything else does.

But the Venn diagram’s creator has never spoken publicly about it — until now. To be fair, it’s extremely possible that no one has ever thought to ask them about it.

The original poster, who now, cheekily, goes by “Shitpostradamus” (@asselerationist) on Twitter and asked not to use his real name, told BuzzFeed News that the whole thing took about five minutes to make and that he’s been following its prolific life beyond his old Tumblr blog.

“I have considered making follow-up charts but I want the piece to stand alone as a somber warning,” he said.

Shitpostradamus, now 23, was in school studying environmental philosophy when he made the diagram. He’s from a metropolitan area in the South, he said, and he’s always been fascinated by fascism. In late 2013, he noticed a shift in how people were using Tumblr that bothered him.

“I became aware of a group of Tumblr users calling themselves ‘the axis of evil’ that consisted of libertarians, Evolian traditionalists, and neoreactionaries,” he said. In that context, libertarianism was mostly men’s rights activists who wanted to abolish the federal government, Evolian traditionalism — a strain of occult Italian neofascism following the works of the philosopher Julius Evola — and the neoreaction movement, or “Dark Enlightenment,” an anti-egalitarian political theory championed by computer scientist Curtis Yarvin.

But the real spur to create the image, weirdly enough, was bronies, or adult fans of the TV show My Little Pony: Friendship Is Magic.

“The biggest mindfuck that led to me creating the chart was ‘My Nationalist Pony,’ a Tumblr user who fused 1488-style white nationalism with brony shit,” Shitpostradamus said.

Parts of the chart are self-explanatory, such as the role of white nationalism in online extremism. The section about 9gag and 4chan lines up extremely well with what we’ve seen in 4chan-adjacent communities like Discord and 8chan. And “tfw no gf,” while glibly written, eerily echoes the rise of incel extremism that has become more common since the 2014 Isla Vista massacre. The most interesting parts of the chart are where these sections overlap. The idea that nerdy men who love memes could discover white nationalism and become incels isn’t that ridiculous. And the idea that members of an internet subculture like bronies could discover a political philosophy like the neoreactionary movement and become obsessed with 8chan isn’t either.

Further breaking down what he meant, Shitpostradamus said the circle labeled “people who reference memes irl” was a dig at nerdy men who were the first to acknowledge memes in public — the guys wearing rage comics fedoras at the mall.

“In hindsight, that panel of the chart points to how important memes and digital virality would be to political movements in the coming years,” he said. “The irony of ‘people who reference memes irl’ is that at the time I made the chart, the IRL meme user was a pariah, but as the IRL and the virtual collide, the IRL meme user has become all of us.”

Shitpostradamus now plays experimental jazz and does permaculture work. He described himself politically these days as a “jaded communist” (although his Twitter bio reads “lapsed anarchist”).

Watching his post travel around social media, he said the hardest thing has been knowing the mainstream media still doesn’t understand how violent men use the internet.

“To me the greatest media failing is just like ignorance of what these people really believe,” he said. “Watching people get trolled by the Christchurch shooter’s manifesto made me cringe out of my body.”

Elizabeth Minkel, cohost of the Fansplaining podcast and journalist, wrote her master’s thesis on Tumblr culture and called the period when Shitpostradamus made his chart the peak of “organic Tumblr” — when the website was exploding with activity and bringing in all kinds of new groups.

“By around 2013, we were reaching a saturation point,” she said. “The same tools that were being used for a lot of fan culture and enthusiast activity were being used in pretty negative ways as well.”

It’s easy to wave away all of this as unimportant — and in a sense, it is. But, at the same time, an anime message board is one of the largest hubs for far-right radicalization in the world, a cartoon frog from a web comic is a hate symbol, and the Christchurch shooter name-dropped the YouTuber PewDiePie in his livestream of the massacre. Unserious internet content and serious horror are tightly linked now.

Jamie Cohen, a cultural and media studies researcher and founder of the New Media program at Molloy College, laughed when I sent him Shitpostradamus’s Venn diagram and said he had absolutely seen it before.

“I think the creator had really good observational consciousness,” Cohen said. “The way you ‘speak internet’ means you can pick up on the ‘aura’ that surrounds the communities and while you may not be able to express in words (because our language isn’t big/specific enough), it can rather be ‘felt.’”

Cohen said the chart is problematic because of the “told ya so” attitude of the people sharing it (something I am guilty of). It also reduces the nuance of what’s really happening in online radicalization.

“It misses a larger outer ring of lonely male/toxic masculinity that would be far larger than the graph itself,” he said. “However, as a media archaeologist, I can tell you that this is an amazing artifact of an observant Tumblr user in the still-strong normie meme era of the web.” 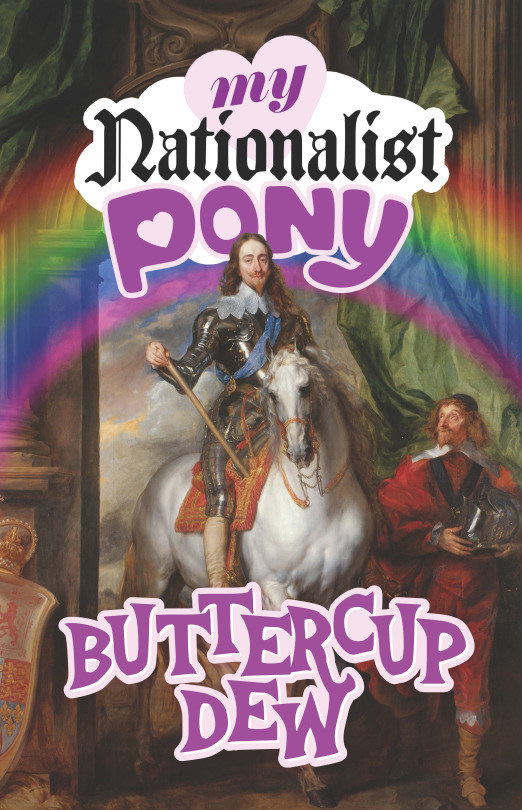 The cover of a book written by the author of the My Nationalist Pony Tumblr account.

Becca Lewis, a PhD student at Stanford University and researcher for the Data & Society Research Institute, also laughed when I sent her the Venn diagram and acknowledged she had seen it before and said it touches on some very powerful truths, if in a compressed way.

“In short, white nationalist and misogynist movements have grown out of centuries of structural power, and boiling them down to ‘no gf’ is simply inaccurate,” Lewis said. “Then again, that is the nature of a good meme — take a grain of truth and expand on it and streamline it in a humorous way!”

She said it does a good job of showing how the men drawn to misogynistic hate campaigns like Gamergate in 2014 were drawn into further extremist communities. This month marks the five-year anniversary of the beginning of the Gamergate movement. It also does an accurate job of visualizing how important memes are as a gateway for this kind of transformation.

“What it seems to be getting at is the culture of geek masculinity that defines so many internet spaces and has helped fuel reactionary political movements like Gamergate online,” she said.

“These movements are extremely diffuse. There is never just one reactionary movement on the way in the internet age. We have seen them rise, fall, and rise again,” he said. “The worst is yet to come, imho.”