Trisha Brown on the Beach: Catch a Wave of Dancing Bliss

This year, the Beach Sessions at Rockaway Beach features the Trisha Brown Dance Company in a program of early works.

The dancers were sinking. Even the softest of waves were too much for their feet — strong as they were — to hold their own in the soggy late afternoon sand at Rockaway Beach.

“Leaning Duets II,” a work by the choreographer Trisha Brown from 1971, is a classic partnering experiment in balancing while being counterbalanced. In pairs, the dancers faced each other bound by a paddle contraption — a piece of wood on each of their lower backs, looped together with a rope — as they planted their feet and leaned backward.

The aim? To create opposing diagonal lines, sort of in the shape of a V. And then to keep moving.

A beach, it turns out, poses certain challenges for such a task. There was a steady breeze. The surf was loud. And that sand! Before the dancers could even start to drift and swirl — the sort of delicate micro movements that help make this seemingly simple dance mesmerizing — their torsos began to buckle. Their diagonals curved forward like commas. They dipped to the side precariously.

But that was why the members of the Trisha Brown Dance Company were at the beach — to learn, not so much about the dance, which they had performed before, but about the environment. This Saturday starting at 5:30 p.m., as part of the Beach Sessions series, the esteemed company takes over the shoreline from Beach 97th Street to Beach 110th Street with a program highlighting a selection of works chosen for the way they would interact with the beach. 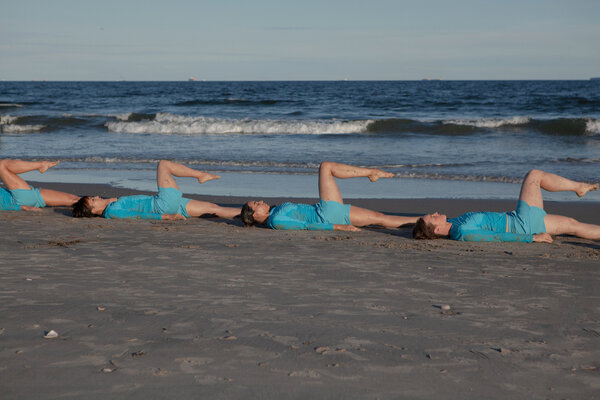 Because of the start time, high tide is a factor. Carolyn Lucas, the Brown company’s associate artistic director, had placed the dancers on a strip of spongy sand by design. “They need to understand what it feels like to have the earth not necessarily supporting them,” she said, and then noticed a dancer getting the hang of it. “Oh! It’s great the way she’s spinning.”

While the company has presented iterations of its “Trisha Brown: In Plain Site” series — versions of early, non-proscenium works — all over the world, it has never staged one on a beach. Beaches have been missing out.

The instant the dancers, clad in cyan blue surf tops and shorts, began performing Brown’s choreography, the natural world popped, coming into sharper, more colorful focus. It was like a conversation you might have in a fever dream: The sea gulls twirled around the dancers, and the dancers, perched majestically on a jetty for “Figure 8” (1974), made arcing patterns with their arms as though they were airing out their wings.

The program will conclude with a performance on a stage — erected on the sand — of three more dances: “Solo Olos” (1976), “Accumulation” (1971) and “Opal Loop” (1980). But for the first half, audience members will move with the dancers as they progress along the shore. Because of its setting, Beach Sessions is casual by nature. But it’s more than an excuse to sit in the sun. It’s become a poignant end-of-summer tradition in which the wild, enigmatic nature of experimental dance finds, at the beach, its missing twin.

Beach Sessions was created in 2015 by the producer and Rockaway resident Sasha Okshteyn, who had a dream: to bring quality dance and performance to Rockaway Beach. But she also had another, more private dream. She wanted to plant a particular company on Rockaway sand — the Trisha Brown Dance Company.

“Trisha’s site-specific work in the early ’70s was so revolutionary, and it was made on the streets of Manhattan,” Okshteyn said of Brown, who died in 2017. “I was really excited to think about how her pieces can respond to the natural elements of the beach.”

The performances, which will include “Spanish Dance” (1973) and “Group Primary Accumulation” (1973), with the dancers lying on the sand, will be looser than usual, Lucas said. “They’re very playful works,” she said. “That’s something beautiful about the early works and Trisha’s sense of playfulness and sense of humor.”

There was a certain wildness in her choreography, too — a slippery chaos bubbling beneath the highly refined surface — that fits with the natural world. It was Okshteyn’s idea to include “Opal Loop,” a luminous work that normally envelopes its four dancers in swirls of fog.

“I wanted the program to include works that made sense right along the water’s edge,” Okshteyn said, “and then I also asked for ‘Opal Loop,’ because I was really interested in how Trisha was bringing the natural world onto the proscenium stage. I wanted to reverse that and bring that piece out into the natural world.”

“Of course, we can’t have an artificial cloud,” she added, “but to have the natural clouds there — and perhaps it will be a misty day. That’s totally my fantasy, that it’s a foggy day and they’re dancing in the natural cloud.” 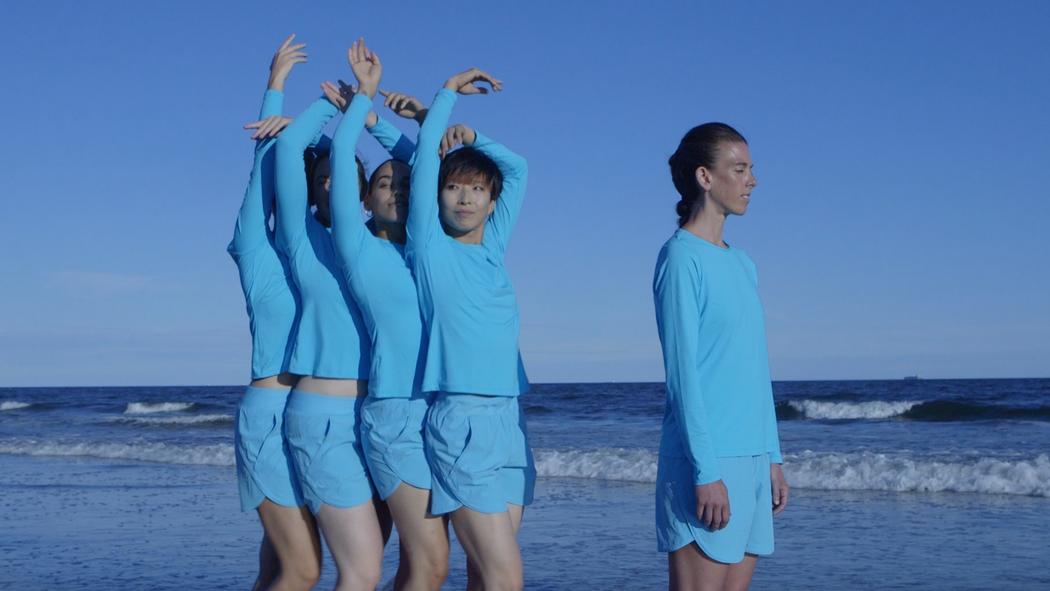 During a 1987 lecture-demonstration at Jacob’s Pillow, Lucas remembered a moment when Brown suddenly blurted out: “Opal Loop, Opal Loop, Opal Loop, Opal Loop” and spoke about the dance and, in a sense, her philosophy of dancing — her dancing. It’s unpredictability is, she said, “unlikely, ongoing. Phrases are minutes long, yards and yards of never stopping or even slowing down.”

Brown referred to this period of her work as the Unstable Molecular Cycle (1980-1983), which is based in memorized improvisation and includes her postmodern masterpiece “Set and Reset.” In “Opal Loop,” Brown said: “There is a total immersion at the bat of an eye, from one physical state to another. It is tumultuous to perform, but if I guide the momentum just right there is an ease.”

Lucas, who performed the work, remembers being conscious of how she could feel Brown, “that she would just be guiding something, and all this beauty would just whiz out of her and look so effortless,” she said. “But it was really not effortless”

For Beach Sessions — as for all the company’s “In Plain Site” programming — the dances aren’t altered; it becomes an experiment in choreographing choreography. What is the best spot for a particular dance? How might the dancer get from one location to the next? For one transitional moment, Lucas has included “Scallops” (1973), in which the dancers stand side by side and run to a new position in order to keep up with the line.

“Always, we try to hold the rigor of the idea intact, even though that environment might be challenging it,” Lucas said. “But part of the fun is to learn — you’re like, ‘Oh, look at that beautiful spot.’ And then you start to realize, well, five people can see that. I learned after about my fifth ‘In Plain Site’ to stop looking at beautiful places where nobody can fit. So it really becomes about a bigger picture.”

For the dancers, working outside can be challenging. You can get distracted by a tree or a bug; and there’s always the weather to contend with. But, the dancer Patrick McGrath, said: “When you really find that sweet spot and you hear bird calls or frogs and you kind of learn how to use your feet differently in dirt, it informs the work in a way.”

“And it’s funny,” he added. “You would think that she would have expected this almost with some of the pieces because they fit so naturally — sometimes a line just works so well outside with a tree.”

That kind of serendipitous artistry is a source of surprise and delight at Beach Sessions. This season, with the Rockaway Film Festival, it is also presenting a screening of “Einstein on the Beach,” directed by Robert Wilson and composed by Philip Glass, on Friday at the Arverne Cinema. “It’s interesting to consider the allegorical beach and the real beach,” Okshteyn said. “Also it was made in 1976 and a lot of Trisha’s younger work was made around the same time.”

As for bringing a sliver of that world and its art, particularly the Trisha Brown company, to Rockaway? “I’m honestly kind of still in shock that they’re performing,” she said. “Beach Sessions is a homegrown project. I hope it’s inspirational to other young programmers that if you just stick to it, you can do what you want to do. You can grow something on your own.”