“‘I think I’m the greatest president that ever was and if I’m not elected the national interest will suffer greatly.’ That cannot be an impeachable offense,” Trump’s defense argued. 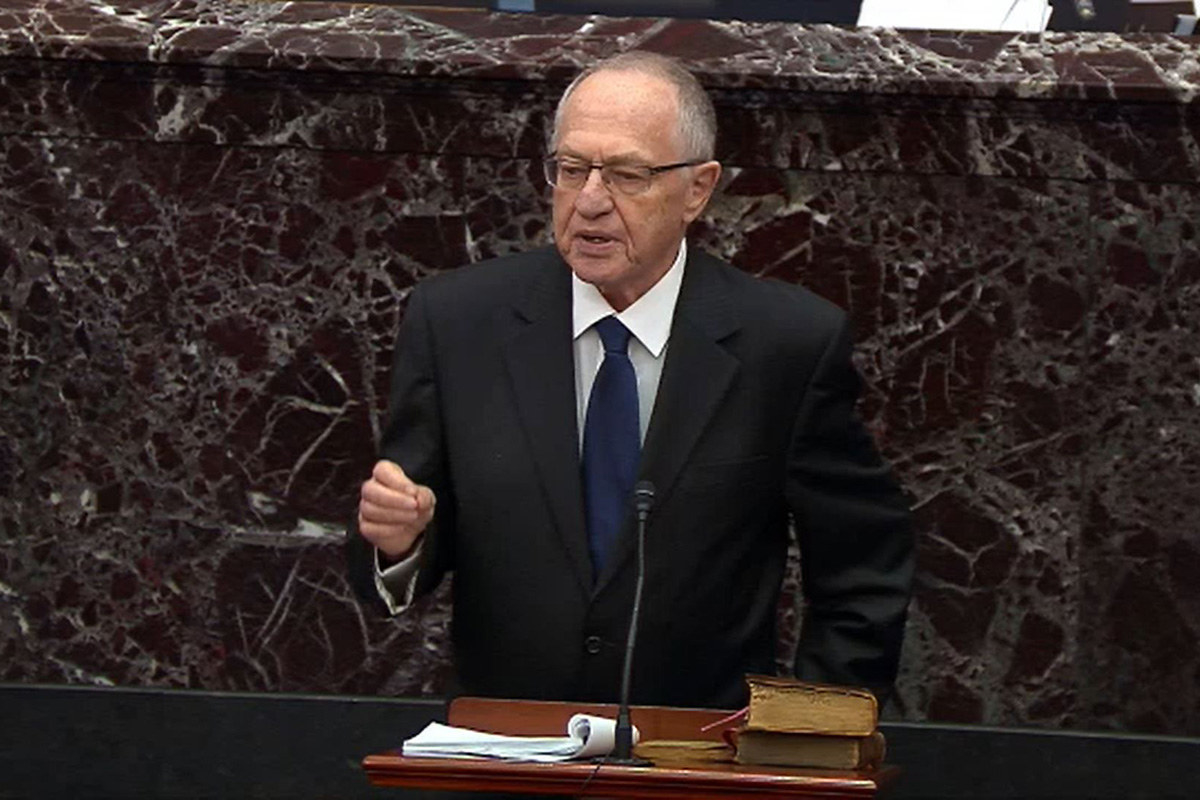 WASHINGTON — Trump lawyer Alan Dershowitz told senators that presidents cannot be impeached for using their powers of office to boost their own political fortunes, as long as they believe their reelection is best for the country. Even Republicans aren’t following him down that trail.

While responding to questions from senators Wednesday, Dershowitz argued that presidents cannot be impeached for demanding a quid pro quo to help get themselves reelected.

The Impeachment Today podcast gets you up to date with the day’s most important impeachment news. Catch up on all the episodes, or subscribe on the iHeartRadio app, Apple Podcasts, Spotify, or wherever you listen to your favorite shows.

“But a complex middle case is ‘I want to be elected. I think I’m a great president. I think I’m the greatest president that ever was and if I’m not elected the national interest will suffer greatly.’ That cannot be an impeachable offense,” he said.

Trump is accused of holding up almost $400 million of military aid from Ukraine unless the country announced an investigation involving former vice president Joe Biden and his family. Democrats have portrayed this as a political quid pro quo to help to damage Trump’s possible presidential contender and boost his reelection chances. Under Dershowitz’s view, this would not be an impeachable action.

Asked if they agreed with this argument, Republican senators distanced themselves from it.

“I wanted to separate myself from that part of the conversation,” said Sen. Tim Scott, adding that he believes the the suggestion that Trump acted purely to get himself re-elected is flawed.

Scott said that Dershowitz was speaking hypothetically, not about the circumstances of the Trump impeachment. He said that in Trump’s case there was a legitimate interest in demanding the investigation because of concerns about corruption in Ukraine.

“He said ‘a president’ not President Trump. I think he was talking about a philosophical perspective,” said Sen. Scott.

Sen. Mike Braun agreed. He said Trump had mixed motives — a blend of public and political interests — when he demanded the investigation. That, says Braun, makes the action legitimate.

Asked if he believes in Dershowitz’s legal interpretation, he said “I don’t think anybody has to grapple with that because that’s not the case here. It was mixed motives.”