Somewhere in the middle of April, I started taking up space again in the world, the bigger one outside of my apartment, beyond my neighborhood. Taking up space is a bizarre feeling after a year spent inside. It’s sometimes exhilarating, sometimes terrifying. It’s always strange.

As we emerge from the pandemic, we’re not just walking around without masks, we’re learning how to re-enter our bodies. It’s wild out there — meaning the merry, unnerving combination of New York City and lifted restrictions — but it’s still time to hold on to all that is slow.

The pandemic, devastating in so many ways, has also been a chance to explore the value of the body and of the everyday, a chance to refocus your eyes, to realize, as the dance critic Edwin Denby wrote: “Daily life is wonderfully full of things to see. Not only people’s movements, but the objects around them, the shape of the rooms they live in, the ornaments architects make around windows and doors, the peculiar way buildings end in the air.”

In his 1954 essay “Dancing, Buildings and People in the Streets” (also the title of a later volume of writings), Denby explores the art and act of seeing, both in performance and in the daily dance of life. During the pandemic, I thought a lot about Denby’s essay, a reminder not to stop looking at the details of daily life. People slowed down. And you could study your body just as you could study the world. 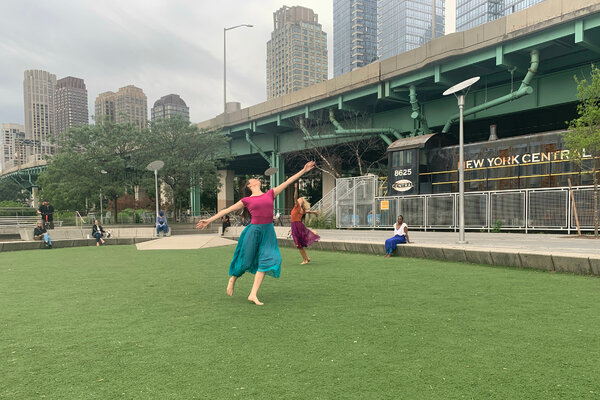 As vaccinations have increased, the world has changed, though it is not what it was nor what it will become. This spring, there were dances to watch again in person; by May, I wondered if it was time to buy an unlimited MetroCard. Some of this was great — like when members of the club world performed at the Guggenheim, in “Ephrat Asherie’s UnderScored,” part of the Works & Process series. Some of it was forgettable. But much of it seemed right for the moment: processions in nature, a participatory installation at MoMA, an intimate studio showing. In different ways, they all reflected the time we’re in — a liminal, in-between place that’s not going to last forever. (Hold onto it.)

Watching performances now isn’t just about the dance itself, but a window into where we stand — perhaps even a way to put the world on pause for just a moment longer. What does it mean to watch and move through space, both in terms of dance and in life? How does the way you feel affect how you see? What should be retained from the pandemic, and what could dance teach us about that?

Dance is sprouting up all around us; it is purposeful, serious, healing, transgressive, inclusive and beautifully loose. And while theaters haven’t completely opened their doors, choreography has spread across rooftops and parks, studios, graveyards and museums. 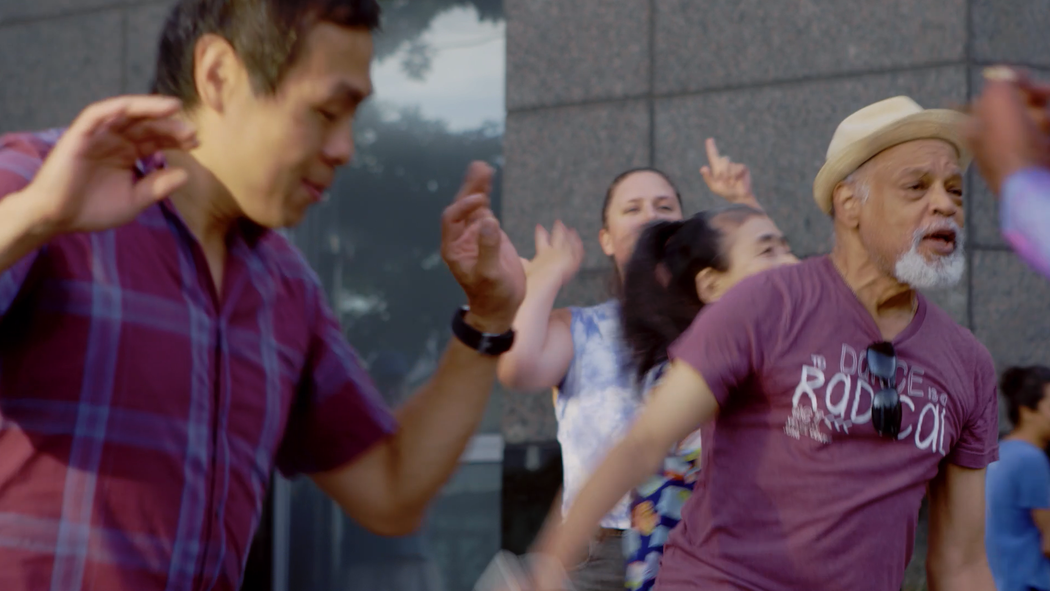 Processions, those performances with a built-in cast, are everywhere, too. Why now? They’re practical, of course — held outdoors, they don’t require excessive choreographic construction. And they feel right for this in-between time: they’re not exactly shows but events created in the moment. And how they turn out — meaning how they look and, more important, how they feel — depends on who shows up.

The recent 2021 River to River Festival, in association with Movement Research, presented three processions, led by Miguel Gutierrez, Okwui Okpokwasili and the Illustrious Blacks. What does it mean to inhabit our bodies — and the city — as individuals and as a group? “It was almost like reopening doors of possibilities as we are emerging from the pandemic and entering into this new world,” Lili Chopra, executive director of artistic programs at Lower Manhattan Cultural Council, said. “It’s a participatory moment that you’re doing together but that you can take with you.”

In a procession led by Gutierrez at Teardrop Park in Lower Manhattan, it was about thinking about the land we were walking on; it was also about slowing down and seeing. Before we started walking, we executed, at Gutierrez’s instruction, a movement in which our outstretched arms cupped and scooped the air forward and back.

To him, the action could invoke many things; it could be a summoning gesture or contain the idea of conjuring. It could be about moving energy or banishing. He spoke about waving as a gesture of reawakening: “Healing,” he chanted, “is not a space of forgetting.”

In a time when it seems like a lot of people have pushed the last year and a half out of their heads, the gesture was grounding and soothing. It also reverberated: As we walked toward the park, a pair of children in a high-rise apartment could be seen rippling their arms in the same meditative slow-motion; they were behind a window but their attention — they watched, they copied, they moved along with us — made the procession matter even before it really started.

Moving as a collective, especially after so much solitude, has a hypnotic effect. That idea of togetherness was at the core of Global Water Dances 2021 at Locomotive Lawn in Riverside Park South in June, which used movement to bring attention to the cause of clean and safe water. Martha Eddy, the dance educator and one of the event’s coordinators, helped to lead a dance in which participants, dancers and audience members alike, made waves with their bodies.

“You start to feel harmony,” Eddy said of the liberating power of moving with others. “And we’re building some kind of collective effervescence that both feels the angst and then releases the joy of what humanity can create.”

But effervescence, I’ve found, isn’t only about large groups; it isn’t even about being outside. In a series of one-on-one showings, the dance artist Kay Ottinger performed a solo by Melanie Maar as part of a larger project she initiated with three mentors. Each is passing on a practice or a piece. For Maar’s solo, Ottinger rotated her body with a heavy strand of wooden beads wrapped around her waist. Rocking forward and back while circling her hips over the course of 20 minutes, she transformed the room, a dingy studio at Judson Church, and the air within it.

There is a priceless thing about live performance: The energetic exchange between a dancing body and one that is still and attentive. Mirror neurons — how a brain cell reacts to an action, either when it is performed or simply watched — are charged. That’s what I felt with Ottinger and in “Embodied Sensations,” a participatory work by the artist Amanda Williams, who is based in Chicago. Trained as an architect, Williams cares about space; her piece was one of my favorite experiences of bodies in space — and my body in space — of the past year.

For “Embodied Sensations,” presented in the vast atrium space of the Museum of Modern Art, Williams teamed up with Anna Martine Whitehead, a performance artist from Chicago; the spectator’s job was to perform movement instructions amid a maze of piled furniture — benches and chairs that had been removed from parts of the museum because of social distancing protocols.

Each performance featured four prompts that spectators performed twice over 30 minutes. One of mine was, “Take three full minutes to do absolutely whatever you want inside this space.” Another contained a more direct instruction: “Imagine that a black hole is at the center of this space. Make your way to the edge of the black hole and practice resisting its pull.”

If the pandemic heightened our awareness of our bodies, “Embodied Sensations” was a way to explore who has the freedom to move and why. One instruction was, in part, to “Imagine yourself as a walking goal post, or a moving target. Decide if you want to get caught.”

But even when the instructions were less loaded, their execution had layers of meaning. During the first round, I felt as if I was performing the instructions; the second time around, I just did them and that had a loosening effect. I was in space, wearing a mask, and I could breathe. Deeply.

All the while, certain instructions echoed moments from the pandemic experience: “Choose any space,” one read. “Close your eyes, listen and smell intently for about 2 minutes. Choose someplace new, keeping your eyes closed. For one minute, focus on how you feel. Repeat even if you’re bored or tired.”

Haven’t we all been bored and tired over the last year and a half? Alone with our feelings? Without the space to move big, we looked within, to the body. And for those of us who usually see many live performances, we had to pay attention to the bigger world — examining the angles in nature, the choreography of the everyday. Both were gifts. Now, there’s little shortage of dance events, and here are two: STooPS BedStuy, an annual arts event, is July 24; on Aug. 7, Dance Church, a guided improvisation class from Seattle, makes a tour stop in New York.

Or, as a re-entry experiment, borrow from Williams. Close your eyes. Focus on how you feel. And then repeat. Think about how your body, not just buildings, end in the air. It’s all about relishing the in between.