‘WandaVision’ Review: That’s Why They Became the Disney+ Bunch

R.I.P., “Jessica Jones,” “Agents of S.H.I.E.L.D.,” “Runaways” and all your first-wave Marvel Television comrades. You were a motley bunch, scattered across the TV and streaming landscape, but you provided some solid entertainment value over the last seven years, until the corporate Thanos in Burbank decided your time was up.

Those dozen or so shows are gone now, like residents of an errant time line, and Marvel Studios is starting over, producing its own extensive roster of superhero series for its shiny new corporate cousin, Disney+. They will be reliable members of the Marvel Cinematic Universe team, fitting more snugly into the continuity of that vast narrative-industrial complex and probably subject to a higher degree of analytics and storytelling-by-committee than their predecessors.

So it’s unexpected that, after some shuffling of schedules because of the pandemic, the first product of this new regime — “WandaVision,” premiering with two episodes (out of nine) Friday on Disney+ — is an odd duck, a high-concept combination of paranoiac mystery and nostalgic pop-culture burlesque. Its two central characters are borrowed from the “Avengers” movies but they’re in very different territory here, more reminiscent in some ways of the most distinctive of the earlier Marvel shows, FX’s “Legion.” Or of one of the more metafictional episodes of “The Simpsons,” though not nearly as funny.

Odd does not, by itself, equal good, and on the evidence of the three episodes made available for review, the eccentricities of “WandaVision” are mostly just weighing it down. It feels as if we’re still waiting for the real show to get started, and even with half-hour episodes (reminiscent of the hit Disney+ sci-fi serial, “The Mandalorian”) that’s a long time to wait. “The Mandalorian” had the good sense to introduce Baby Yoda in Episode 1.

“WandaVision” takes two of the lesser Avengers, the telekinetic Wanda Maximoff (Elizabeth Olsen) and the embodied artificial intelligence Vision (Paul Bettany) — important in the plots of the films but not at the top of the call sheets — and plops them into a new plane of existence. They are, for reasons initially unexplained (though very gradually suggested), living not just in a 1960s-style suburban idyll but also in lovingly produced parodies of actual vintage TV comedies: “Bewitched,” “The Brady Bunch,” “The Dick Van Dyke Show” (with touches of “I Love Lucy”). 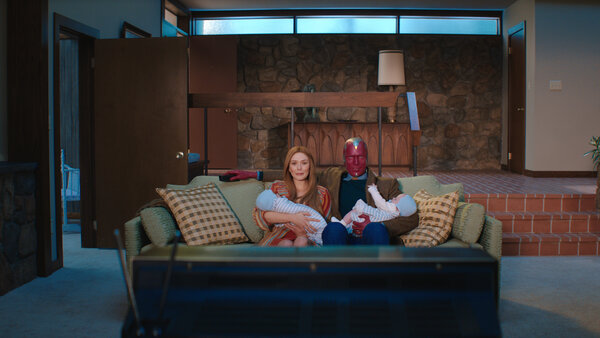 Wanda and Vision, when they think about it, have no more idea than we do about what’s going on or how they got there. They struggle, in broad comic fashion, to hide their powers while going through sitcom rites like hosting a dinner party for the boss or putting on a magic act for a town fund-raiser.

These scenes — the show-within-whatever-it-turns-out-to-be-within — are presented in an authentically flat black-and-white, with sudden shifts into deeply saturated color that hint at another world. The characters around Wanda and Vision, including an oversharing neighbor played by Kathryn Hahn and a new confidante of Wanda’s played by Teyonah Parris, enact exaggerated sitcom camaraderie while betraying flashes of knowledge that things aren’t hunky-dory.

On the term-paper plane where a certain portion of comics-fan love plays out, “WandaVision” has a lot to offer. The situation comedy meets the science-fiction conspiracy thriller on the common ground of manufactured reality. Characters with exceptional powers and histories are forced to efface their identities in a simulacrum of mid-20th-century suburban conformity. “The Brady Bunch”!

Moment by moment, though, the show’s execution of its premise is less fun for the viewer than it evidently was for the creative team, which was led by the director Matt Shakman and the head writer, Jac Schaeffer. The classic-comedy pastiche is skillful, affectionate and well-performed, but it’s not terribly imaginative — if anything, it’s a little too true to its antiquated sources.

It’s also not very funny, which is a continuing disappointment even if it’s at least partly intentional. An associated problem, and perhaps the central one, is that there’s a disconnect between the sitcom reality and the sci-fi reality — the humor and the terror aren’t working together, they aren’t amplifying each other. Much of the time, you’re just watching a sitcom parody and wondering why the mysterious forces in control needed it to be so detailed.

It’s not uncommon for TV series to be overthought, but “WandaVision,” through three episodes, feels like an extreme case; you could even go so far as to call it over-intellectualized. There may be some Marvel nerd-king arrogance at play, too. (On a related note, there’s probably never been a series with closing credits this elaborate. I thought they might be a put-on, but they’re there every episode.)

This could all change, and improve, as the larger framework of the story is revealed, a process that seems underway by the end of the third episode; not being able to review more of the season reflects another Marvel-Disney tic: extreme spoiler paranoia. It may be worth the wait, because Olsen and Bettany, both fine actors, didn’t have much room to work in the films (though Bettany was still the best thing about “Avengers: Infinity Wars”).

“WandaVision” gives them more of a showcase. So far, that has consisted of gamely re-enacting sitcom tropes, but maybe they’ll eventually get to unleash their powers.

END_OF_DOCUMENT_TOKEN_TO_BE_REPLACED

END_OF_DOCUMENT_TOKEN_TO_BE_REPLACED
We and our partners use cookies on this site to improve our service, perform analytics, personalize advertising, measure advertising performance, and remember website preferences.Ok