What It Means to Become ‘America’s Favorite Dancers’

At the beginning, “So You Think You Can Dance” seemed unstoppable. The “American Idol”-style reality competition found a devoted audience when it premiered in the summer of 2005. In the late 2000s, at the height of the show’s popularity, the names of “So You Think” dancers were familiar enough to pepper casual viewers’ dinner-table conversation. Did you call in to vote for Benji or Sabra or tWitch?

A decade and a half of declining ratings later, “So You Think” is on shaky footing. The show has been off the air for nearly two years, with Covid forcing the 11th-hour abandonment, last June, of its 17th season. Though the series has not been canceled, production has yet to resume, making another summer without it likely. “We’re holding our breath,” said Jeff Thacker, an executive producer of the show. “We’re not drowning yet.”

While “So You Think” may be on hiatus, its dancers haven’t slowed down. During the pandemic, they’ve been all over the small screen, the big screen and, inevitably, our phone screens.

Season 4’s Stephen Boss, known as tWitch, is a co-executive producer on “The Ellen DeGeneres Show.” Season 6’s Ariana DeBose starred in Ryan Murphy’s film adaptation of “The Prom” and plays Anita in Steven Spielberg’s coming “West Side Story” remake. Season 13’s Tate McRae released a single, “You Broke Me First,” that rode a TikTok wave to the top of Billboard’s charts. Like dozens of other alums, each of these artists boasts hundreds of thousands, if not millions, of Instagram followers. 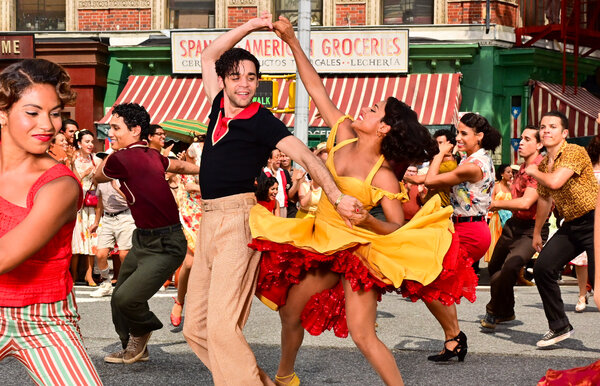 If “So You Think” faces an uncertain future, this will be part of its legacy: The show helped propel dancers into the mainstream. In showcasing them as individuals, it countered an entertainment-industry tendency to view dancers as interchangeable, a sea of blurred-out faces behind musical artists and marquee actors. “So You Think” brought dancers into focus, opening pathways to high-profile, remunerative entertainment careers — and paving the way for social media’s dance influencers.

“The show gave dancers a huge platform,” said Allison Holker Boss, a Season 2 contestant who is now a television and social media personality. (She and tWitch started dating after a “So You Think” wrap party and married in 2013.) “It put our stories at the forefront. And there weren’t a lot of places for that elsewhere.”

In the days before “So You Think,” entertainment-industry dancers were generally, and sometimes deliberately, anonymous. “Most musical artists, when they had backup dancers, they didn’t want people who were going to pull focus,” said Julie McDonald, a founder of McDonald Selznick Associates and one of the first talent agents to represent dancers.

Thacker described commercial dancers of the ’90s and early ’00s as “transparent — there was never a name attached.” Or a voice. At auditions, Thacker said, they were expected to “say nothing, do what they do, smile, and get off.” Those who aspired to fame left dance behind. “The dancers who wanted to be stars? They had to go and start studying acting,” McDonald said.

But “So You Think,” created by the “American Idol” producers Simon Fuller and Nigel Lythgoe, saw ratings potential in these charismatic artists. True to the cardinal rules of reality television, the show doesn’t just audition technicians — it casts personalities. “The concept originally was loosely based on that musical ‘A Chorus Line,’ whereby we weren’t just looking at skill; it was, ‘Who are you?’” Thacker said. “We didn’t want America’s best dancer, we wanted America’s favorite dancer.”

Weekly episodes center on live performances by the contestants, but also feature footage from rehearsals, familiarizing mainstream audiences with the demanding, often-invisible work of being a dancer. And the show does not shy away from dance language. Technical terminology peppers judges’ critiques, nudging viewers to take dancers’ craft seriously. “The conversations about dance that were happening on prime-time television — ‘Oh, your passé, your grand jetés’ — that was completely new,” McDonald said.

“So You Think” competitors also receive a crash course in self-presentation. The show includes get-to-know-you segments that help them become comfortable talking on camera. Postseason live tours, in which the dancers act as both performers and hosts, offer especially intensive training. “We were doing full skits!” tWitch said. “It was 360-degree preparation for not only doing the moves, but also presenting yourself as yourself.”

From its first season, “So You Think” was minting dance influencers, known to the show’s fans for both their personalities and their technique. But “influencer” wasn’t yet a career option. Alums of the first few seasons — so many Cassies now out of place in the chorus line — often took a beat to figure out how they fit in the dance industry. “I think a lot of them didn’t quite know where to go,” Thacker said.

Some plowed themselves back into the show, returning as choreographers, judges or “all-star” partners for contestants. Some jumped into the other dance shows that began to crowd the airwaves, from “Dancing With the Stars” to “America’s Best Dance Crew.” Many became teachers at dance conventions, capitalizing on the show’s popularity among dance students.

But by a few seasons into “So You Think,” the rise of social media began to normalize the idea of dancers as pop-culture personalities, creating a new realm of opportunities for the show’s standouts. Video- and image-based social platforms proved especially dance friendly, and as YouTube and Instagram exploded, dancers everywhere became far more visible. Many “So You Think” stars built large followings, opening the door to lucrative sponsorships and business ventures.

Witney Carson McAllister, a Season 9 contestant who is now a featured pro on “Dancing With the Stars,” has grown a lifestyle brand with the help of her Instagram fan base. “Social media was a continuation of what ‘So You Think’ started: an opportunity to connect with people on a more personal level, to be a voice and a personality instead of just a dancing body,” she said. “It became a place where I could start a clothing line, grow a business, because people knew me.”

As influencer culture continued to raise dancers’ profiles, even those who chose more conventional dance careers felt the impact. Season 10’s Jasmine Harper, who began dancing for Beyoncé after being scouted on “So You Think,” said she saw a new level of respect for dancers’ work. “You’re still going to be in the background — we all know why people are at a Beyoncé concert,” she said. “But you get a lot more support than maybe dancers used to. You see fan pages dedicated to an artist’s dancers on Instagram now.”

This sea change in the entertainment world isn’t always reflected in the wages or treatment of the average dancer. Some “So You Think” successes have used their clout to support other dance artists in the industry, including the Season 5 winner Jeanine Mason, now starring in the TV series “Roswell, New Mexico.”

“I’m always trying to take care of the dancers on sets, to make sure they’re being compensated and getting breaks,” Mason said. And several alums cited the efforts of Dancers Alliance, which pushes for equitable rates and working conditions for nonunion artists. “This is the next frontier: We get to enjoy and love dancers, but we also need to take care of them,” Mason said.

As the world changed around “So You Think,” the show, once ahead of its time, began to feel behind the times. When what’s happening on Instagram and TikTok feels more relevant than what’s happening on network TV, dancers have a route to renown that doesn’t require subjecting themselves to the trials and humiliations of a televised dance competition.

“I think part of the magic of ‘So You Think’ in the beginning was that it gave unknown people a start,” said the Season 12 winner Gaby Diaz. “Now, a lot of the time the dancers auditioning for the show have been on social media for a while. They’re already names.”

“So You Think” remains stubbornly indifferent to contestants’ social fan bases. “We have people saying, ‘Oh, you should get this dancer into the Top 20, they’ve got 16,000,422 followers,’ but we purposely do not let that sway our audition decisions,” Thacker said.

Still, in recent seasons, the pool of dancers auditioning has looked different, dotted with established influencers. During 2016’s “Next Generation” season, which featured dancers ages 8 to 13, many contestants arrived with large followings and long résumés, despite their youth.

“‘So You Think’ definitely helped my career, but when I auditioned, I think I had a million followers on Instagram,” said Kida Burns, who was 14 when he won the Next Generation season. “I’d danced for Justin Bieber, Chris Brown, Usher.” (Burns now has 4.3 million Instagram followers, on par with Missy Elliott.)

The current production limbo of “So You Think” seems ominous, given that some other dance shows have carried on during the pandemic. Though NBC recently canceled “World of Dance,” ABC just renewed “Dancing With the Stars” after mounting a successful Covid-adjusted season last fall. Fox, home to “So You Think,” finished airing a new reality dance series, “The Masked Dancer,” in February.

Whatever the fate of “So You Think,” both its graduates and its fans are already feeling nostalgic. A few weeks ago, tWitch and Alex Wong, a Season 7 alum, recreated a popular “So You Think” dance, “Outta Your Mind,” on TikTok — two influencers forged in the show’s crucible, performing an 11-year-old television routine for a huge audience of social followers. Tens of thousands liked and commented.

“I think audiences feel these deep connections to ‘So You Think’ dancers,” tWitch said. “Like, yes, they can really dance. But you remember your ‘So You Think’ favorites as people, too.”