What’s on TV Saturday: ‘Mary Queen of Scots’ and ‘WOW’

MARY QUEEN OF SCOTS (2018) 8 p.m. on HBO; stream on HBO platforms. A year after Saoirse Ronan played a pink-haired, rebellious teenager in the indie drama “Lady Bird,” she returned to the big screen as the title character of this period drama, Mary Stuart. Adapted from a biography by John Guy, the film reimagines the decades-long tug of war between Mary and another queen, her Protestant cousin Elizabeth I (Margot Robbie). When a young Mary returns to Scotland from France in 1561 and claims the throne, she asserts she also has the right to Elizabeth’s crown. That sets off a deadly rivalry between the monarchs, which is heightened by dubious men who manipulate their rulers only to inch closer to royalty. The movie opened to mixed reviews; some critics argued the performances were uneven and that Ronan dominates the picture. And while historians may find faults in the plot, the visuals place you right in 16th-century Britain. (The film received Oscar nominations for costume design and makeup and hairstyling.) THE FAVOURITE (2018), another historical drama about women scheming for royalty, leads in at 5:55 p.m. 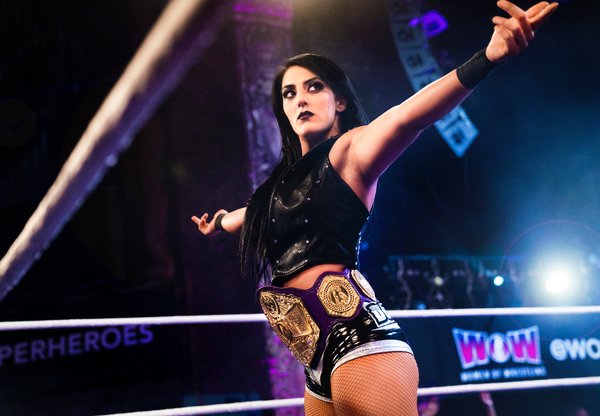 WOW — WOMEN OF WRESTLING 8 p.m. on AXS TV. Fans of Netflix’s “GLOW” who prefer watching the ladies go at it in the ring instead of in the locker room may want to tune in to this wrestling show. “WOW” is created by David McLane, the founder of the 1980s Gorgeous Ladies of Wrestling league and TV franchise, which “GLOW” is based on. The series has had a few short-lived iterations in the past, but it returned to television in January with a long lineup of formidable “superheroes” (i.e. wrestlers). Season 2 introduces a new wrestler, Teal Piper, and opens with a three-way match that will determine who will fight Tessa Blanchard, the WOW World Champion.

GARY OWEN: #DOINWHATIDO (2019) 10:30 p.m. on Showtime. The fast-talking comedian Gary Owen revisits his early days as a military police officer and riffs on race in this new special, his second for Showtime. He also opens up about his friendship with Kevin Hart and says he’s glad to be a comedian whose reputation hasn’t been tarnished by a high-profile scandal — referring to the downfalls of Bill Cosby and Roseanne Barr.

HAPPY-GO LUCKY (2008) Stream on Hulu; Rent on Amazon, Google Play, iTunes, Vudu or YouTube. Consider this dramedy your go-to pick-me-up. Directed by Mike Leigh, the movie stars Sally Hawkins (in her breakthrough role) as Poppy, a bubbly 30-year-old schoolteacher in London who only sees the good in the world. We watch her take up driving lessons with a crabby instructor, go out on the town with her friends and get scolded by her sister for not taking life too seriously. Manohla Dargis named the film a Critic’s Pick in her review for The New York Times, calling Poppy one of Leigh’s “most persuasive optimists.”