What’s on TV Thursday: ‘My Girl’ and ‘Coach Carter’

MY GIRL (1991) 8 p.m. on Showtime 2. A young Anna Chlumsky and Macaulay Culkin play best friends in this coming-of-age comedy-drama that takes place over a summer. For Vada (Chlumsky), the summer is jam-packed with many of the markers of a girl growing up and coming into her own: puberty, developing crushes and adjusting to her father’s dating a new woman. Though death is a consistent theme in Vada’s life — her father is a mortician and her mother has died — she will be devastated by an unexpected loss. In an otherwise negative review for The New York Times, Janet Maslin praised the leads, calling Chlumsky a “poised, lovely young actress.” Culkin, she added, is “a remarkably funny Everykid.” 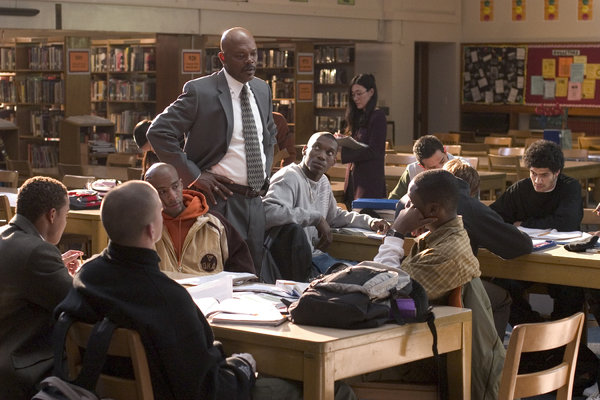 COACH CARTER (2005) 7 p.m. on VH1. Ken Carter (played by Samuel L. Jackson) is a tough-as-nails basketball coach at an inner-city high school in Richmond, Calif., in this drama based on a true story. Coach Carter’s strategy to improve his team’s grades — locking the gym and benching the players — does not go over well with students, parents, staff members or the larger community. Soon enough, though, the approach that made him unpopular, would transform him into a beloved role model.

NATIONAL LAMPOON’S CHRISTMAS VACATION (1989) 8 p.m. on CMT. Celebrate Christmas in July by watching Chevy Chase hurt himself over and over (and over) again in this film that centers on the Griswolds, who are celebrating the holiday with their dysfunctional family. The look of the film was described by Janet Maslin in her 1989 review as “tacky, what with flimsy props and occasionally blurry cinematography.” She added that “the direction by Jeremiah S. Chechik displays comic timing that is uncertain at best.” “In spite of all this, however,” she wrote, “the Griswolds do occasionally have their moments.” So if a sizable helping of 1980s tackiness is what you’re after, consider this cult favorite.

UP IN SMOKE (1978) 9 p.m. on AXS TV. No list of stoner comedies is complete without this movie starring the comics and counterculture personalities Cheech Marin and Tommy Chong. In an article in The Times about marijuana-themed films, Linda Lee described Cheech and Chong in “Up in Smoke” as “characters who eluded the police while smoking joints the size of small logs,” which about sums it up.

WORKIN’ MOMS Stream on Netflix. The second season of this Canadian import debuts in the United States on Netflix. The comedy series starring Catherine Reitman (who is also the show’s creator, writer and executive producer) delves into the lives of four working mothers juggling family and career in present-day Toronto. From breast-pump mishaps at the workplace to defining what makes a good mother, the show addresses serious maternal anxieties without taking itself too seriously. The mommy-and-me class where the women convene serves as a quasi-therapy session with punch lines and existential questions in equal measure.