When Santa Goes on Vacation

Meet the Santas and Mrs. Clauses who live every day like it’s Christmas — even in July. 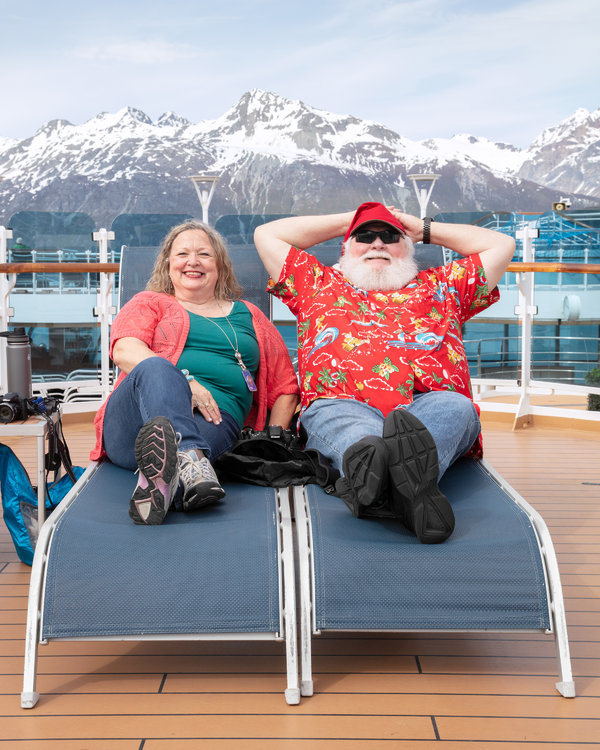 During the Christmas season, Santa may circle the globe in a magical flying sleigh, but during the summer, he vacations like a lot of folks his age: on a cruise ship.

This May, 77 Mr. and Mrs. Clauses embarked on a seven-day, Alaska-bound voyage aboard the Royal Princess. This was the 11th annual Santa Cruise, an event conceived by Santa Tim Connaghan, a 50-year veteran of the red suit, as a chance for professional Santas to gather, schmooze, and stay sharp during the off-season.

“I had read some stories of people — like real estate agents or doctors — having training conferences on ships, and I said, ‘Why not Santa?’” Santa Tim said.

These aren’t your average mall Santas. While fair-weather Father Christmases and casual Kringles might strap on a fake beard and stuff their shirt with pillows for a few days each December, the people on this cruise are part of a community that lives in his image 365 days a year.

Aboard the ship, Santa Tim organizes lectures and workshops covering logistical topics like the proper cradling of a baby, correct hand placement (for the pre-emption of lawsuits), and beard-bleaching, as well as more philosophical topics, such as how to be true to the teachings of the historic St. Nicholas.

For the cruise-goers, Santa is a way of life. Santa Marcel painted his fishing boat in bright red and green and named it “Santa’s Slay.” Mrs. Claus Debbie and Santa John renewed their vows for their 45th anniversary in North Pole, Alaska, dressed in Santa-themed outfits. Mrs. Claus Sherri and Santa Dale make custom-tailored Kringle clothing: A complete outfit with embroidery and embellishments can run over $5000.

Of course, being Santa year-round isn’t always easy. You can never be naughty.

“You’ve always got to be aware of the children around you, and be ready to act as Santa at the drop of a hat, even in July,” Santa Dave Starr said over email.

“If someone cuts you off on the expressway, you have to wave back with five fingers, not one,” Santa Jerry Owens said. “You can’t say anything slanted or particularly political, because you are Santa. You don’t have those views. All you do is make toys.”

And yet, for the fully committed, the sacrifice is worth it.

“The wide-eyed wonder you see in a little one’s eyes,” Mrs. Claus Mary Shannon shared over email, “or the smile that spreads across a child’s face when he spots you at Walmart that suggests you and that child are sharing a special secret that the adults don’t know, and that is priceless.”

Surfacing is a weekly column that explores the intersection of art and life, produced by Alicia DeSantis, Jolie Ruben and Josephine Sedgwick.