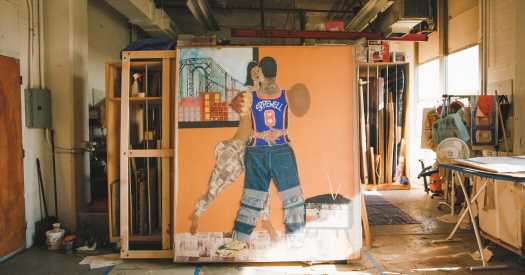 NEW HAVEN — It was warm for October, the sun flooding Tschabalala Self’s paint-splattered studio here, and the last piece left to finish for her first major gallery exhibition in New York City was giving the artist “a lot of trouble.”

The painting — featuring a woman with exaggerated proportions who is shooting a gun in hot shorts, a Western hat and cowboy boots — wasn’t legible to Ms. Self in the way she needed it to be. Its formal qualities were not quite lining up with the overarching themes of her project, which include identity, mythology and pop culture.

But Ms. Self seemed unconcerned about getting it done. Nor did she seem preoccupied by the Black Lives Matter movement churning in the country; she has been dealing with issues of race in her work all along.

That consciousness is on full display in the eight canvases now on view at Galerie Eva Presenhuber in Lower Manhattan. The exhibition, “Cotton Mouth,” through Dec. 19, explores Black American life in contemporary culture and history.

The colorful works display Ms. Self’s signature combination of painting and collage. She does not use glue or adhesive; in homage to her mother’s facility as a seamstress as well as the quilting tradition, Ms. Self integrates swatches of fabric into her paintings by deploying the sewing machine as well as the paintbrush: She draws with stitches. (She also works in sculpture.) 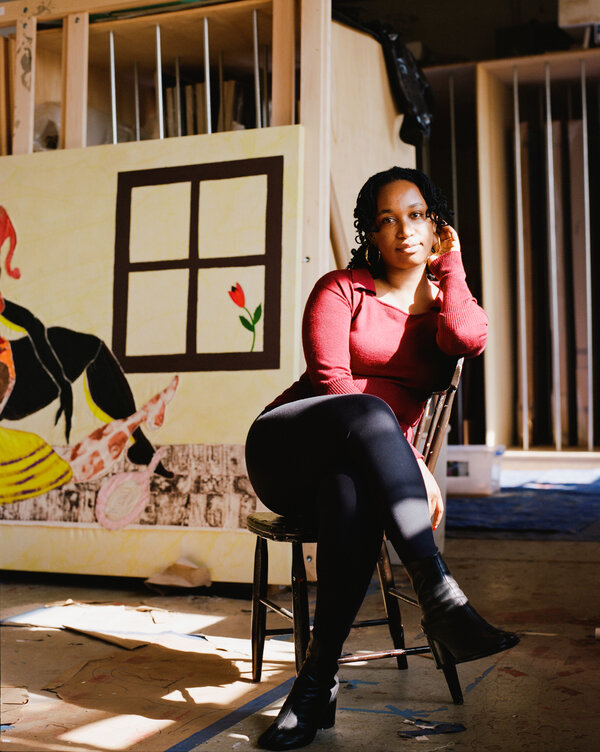 The “heroes” in Ms. Self’s work are everyday people — composite characters informed by those the artist has encountered or observed on the streets of her native Harlem or elsewhere, like the kinetic young woman in her painting “Fast Girl,” or the beefy man with his back to us in a basketball jersey that reads “Sprewell.”

Yet underlying their accessibility and whimsy are weighty concepts — personal narrative and the African diaspora. The “Sprewell” painting, for example, refers to the N.B.A. star Latrell Sprewell, who was suspended in 1997 for choking his Golden State Warriors coach in what the writer Camille Okhio describes in press materials for Ms. Self’s show as “a pointed demand for agency and poignant expression of fury and resilience.”

These paintings speak to what Ms. Self said is the show’s main theme: “understanding and naming the institution of American slavery as the origin of Black American identity.”

“For me, it’s clarifying what I mean when I refer to Blackness,” she added. “Without the institution of slavery, this country could never have been built to be what it is today. The Black American is almost a mascot for modernism. The Black American represents the modern world, the new world.”

The title of the exhibition alludes not only to picking cotton but also to “cotton mouth,” when the body doesn’t produce enough saliva. “It references a tragic history for Black Americans and is a metaphor for the continued silencing of Black Americans,” said Ms. Presenhuber, who began representing Ms. Self in 2019.

“Her work has always spoken for itself,” Ms. Presenhuber added, “but in the current sociopolitical climate, resonates even more.”

While conversations these days about equity have informed the work in Ms. Self’s new show, she said, “I can’t say that I personally have come to any new realizations about race this past year.”

At the same time, she acknowledged that present events bring an urgency and timeliness to her exhibition. “I feel excited to some degree about being able to show my work in this context,” Ms. Self said. “Now everyone is looking at it from the same vantage point.”

Just five years out of art school and 30 years old, the artist is already a rising star. A solo exhibition, “By My Self,” is scheduled to open at the Baltimore Museum of Art in 2021, coming off her show at the Institute of Contemporary Art in Boston, “Tschabalala Self: Out of Body,” which closed in September.

Her work has been collected by the Los Angeles County Museum of Art, the Art Institute of Chicago, the Philadelphia Museum and the Studio Museum in Harlem, where Ms. Self completed a residency last year.

In its multiyear partnership with the Museum of Modern Art, the Studio Museum featured Ms. Self’s work at MoMA PS1 last fall during its annual Artist-in-Residence exhibition, “MOOD,” along with that of Allison Janae Hamilton and Sable Elyse Smith.

And Ms. Self’s paintings have made their way into the highly charged contemporary art market, which is finally beginning to value the work of Black artists. In just the last year, 26 Self pieces have come up for auction, according to Artnet, with one — the flamboyant, hypercolored “Princess,” reaching a high price for the artist of $568,000 at Phillips in London last February. Ms. Self even got a splashy spread in Vogue last spring.

Taking a break from work to talk the other day, dressed in a sweatshirt and Converse sneakers, Ms. Self — whose first name is pronounced SHA-ba-la-la, though she often goes by Tschaba — said she would just as soon never see her work at auction because artists do not directly benefit from such secondary sales. (Her work sells for $35,000 to $240,000 when sold directly through galleries.) She also finds the auction format uncomfortably reminiscent of the institution of slavery.

“It’s annoying, given the subject matter, for the works to be traded and sold in that way,” she said. “The whole spectacle of it is to me very disheartening. I don’t like to be involved in situations where my name is at stake and I don’t have control over it.”

Ms. Self said she stays focused on the larger goal: reaching people through art “that is immediately relevant and interesting.”

“I want my work to connect to that larger audience,” she explained. “I like for it to be rooted in everyday life. I like to have the work be as powerful as it can be.”

That mix of the quotidian and the unusual is at play on her canvases, which the New York Times critic Roberta Smith in 2016 described as having “a marvelous random intricacy.” The scenes are domestic, personal — drawn from Ms. Self’s own experience. Her characters even wear her clothes — the young man in “Sprewell” is dressed in a pair of jeans she outgrew.

For the fifth iteration of her “Bodega Run” series, Ms. Self transformed the lobby exhibition space of the Hammer in Los Angeles into one of New York City’s ubiquitous convenience stores, including wallpaper made from her line drawings of common foods, a tiled linoleum floor and paintings of customers.

“Tschaba looks at questions of what representation can be,” said Legacy Russell, the associate curator of exhibitions at the Studio Museum, “and breaks those things open.”

Having an exhibition in New York now is “a homecoming.” It is where Ms. Self went to high school (Nightingale-Bamford) before attending Bard College and earning her M.F.A. from Yale in 2015. It is where she still shares her family’s Hamilton Heights brownstone with four older siblings. Despite a New Haven apartment, a weekend place in Hudson, N.Y., and extended family in New Orleans, where her parents came from, New York City is home.

Though her work has been shown at other galleries, like Thierry Goldberg in New York and Pilar Corrias in London, the exhibition at Eva Presenhuber is the most ambitious. For the first time she is including an audio component, a mash-up of her own monologue and other voices whose views she said she may not necessarily agree with.

“Black pop culture is the oral history of the contemporary Black mythology,” Ms. Self says in her narration for the audio, in a stream of consciousness. “Within Black pop culture all ideas — contemporary, fiction and fact — become collapsed into one cohesive, one ever-evolving inconsistent but consistent narrative around Blackness.”

Although the bulbous derrières and angular silhouettes of Ms. Self’s paintings have a comedic quality, the artist says that she is experimenting with humor in the audio segment, having been inspired in part by the satirical artist Robert Colescott. “By using the lens of humor, he was able to have more pointed conversations that maybe seep into one’s mind,” she said.

She counts as other influences artists like Romare Bearden, Faith Ringgold, Jacob Lawrence and Howardena Pindell. Curators discuss her work in the context of Wangechi Mutu, Mickalene Thomas and Henry Taylor.

“I see her very much in a cohort of her generation of artists who are integrating many different materials and opening new paths into thinking about Black life,” said Ruth Erickson, a curator at the ICA Boston, who worked with Ms. Self on her show there.

Ms. Erickson — who drew connections between Ms. Self and Kevin Beasley, who also uses textiles, or Devan Shimoyama, who works in portraiture — added that the intelligence and material approach put her work “at the forefront of figurative and identity exploration.”

That approach is evident throughout Ms. Self’s studio in an industrial building here, where scraps of colored, patterned fabric hang in a tangle from the ceiling (which leaks). Image ideas are pinned to the wall. Phrases are scribbled on a chalkboard (“social animal,” “made of wood”). Here, too, is the Black Barbie she bought at Walmart, having been captivated by the doll’s pronounced Afro.

The artist works on the floor, wearing kneepads so that she can maneuver around her large paintings. She talks about the characters in her canvases as people she is getting to know, even as she is the one creating them.

And while occasionally Ms. Self gets stuck in the process — as she did with the show’s final female figure, whose Western gear refers to a story about her family’s patriarch traveling from Texas on a horse to Louisiana — the artist brings an obvious confidence to her work, the knowledge that she’s found her way through in the past and will again, maybe differently this time.

“You want to do something that’s innovative,” Ms. Self said. “You don’t want to parrot what you’ve done before.”

END_OF_DOCUMENT_TOKEN_TO_BE_REPLACED

END_OF_DOCUMENT_TOKEN_TO_BE_REPLACED
We and our partners use cookies on this site to improve our service, perform analytics, personalize advertising, measure advertising performance, and remember website preferences.Ok