With These Experiences for Kids, All the Living Room’s a Stage

Back in March, when New York’s governor abruptly ordered Broadway theaters to shut their narrow lobby doors, many of us thought they would soon open again — in April or July, surely by January. I remember kidding a friend, via text, about it: “If not, I’ll just make the kids do ‘Hamlet.’” Careful what you joke about.

Because on Thanksgiving Day, my children put on a show. It wasn’t “Hamlet.” (“Hamlet” is dark. And very long.) But it had costumes, props, a set change and even a couple of light gels. This was courtesy of Play in a Box, a new initiative from Young People’s Theater in Toronto. For those who have tired of remote theater, Play in a Box joins several recent, child-friendly efforts to bring theater to you, for you and most importantly by you. And many of these makers have created holiday-themed work, which is (depending on your lighting rig) merry and bright.

This summer we had a sublime experience with “Charlotte Holmes,” a story box from children’s theaters in England, about a young evacuee who solves rural crimes during World War II. Its cheerful videos taught my kids solitaire, a substitution cipher and the fundamentals of Morse code. (The “Charlotte Holmes” people have a new box in the works, the magic-themed “Balthazar Snapdragon,” which should arrive in time for Christmas.) After that success, we wanted to keep the theatrical, recyclable good times going. Enter Play in the Box. 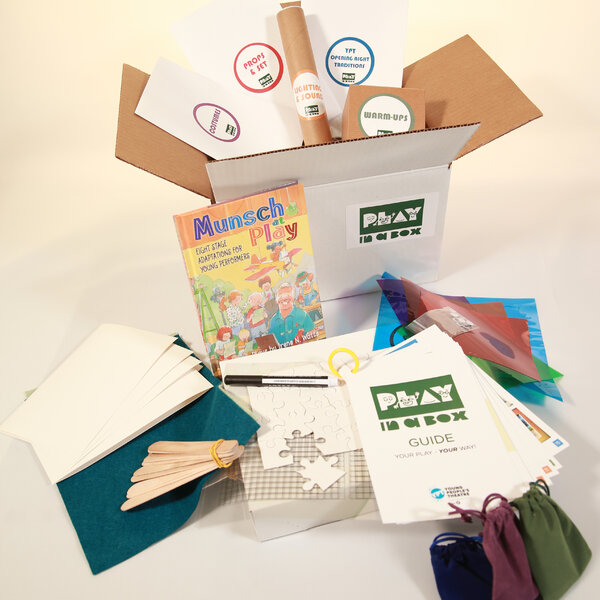 The excitement begins with the box itself, which is pleasingly large. Having attacked it with a butter knife, the children, discovered further boxes inside, plus some tubes, envelopes, an instruction manual and eight scripts adapted from the children’s books of Robert Munsch.

Not every packet was assembled with the same care. The costume one held just a square of blue felt and an outline of animal ears. But our box was a prototype. And besides, polished elements run counter to the gentle, D.I.Y. ethos.

After reading through a few plays, the children, chose “The Paper Bag Princess” and spent a cheerful morning attaching wings to a dinosaur bathrobe, repurposing packing materials as the paper bag and labeling a couple of cardboard boxes “CASTLE” and “CAVE.” With minimal squabbling, they performed a few suggested warm-ups, planned blocking, ran lines and drafted their not especially enthusiastic father to run sound (“Make your phone play castle music,” the 7-year-old ordered) and lights, shining a flashlight through gels to create a pretty decent flame effect.

The enterprise had Mickey Rooney/Judy Garland vibes, without the later descent into pill and alcohol addictions. It also had a very “Midsummer” rude-mechanicals feel. “This is a castle because this box says CASTLE,” the 4-year-old explained. But the audience (their grandmother) applauded vigorously. Though no one had explicitly requested an encore, they performed one in a friend’s backyard over dessert.

The next day, we tried a new experience from Threshold, a new company started by a pair of Australian theatermakers, Sarah Lockwood and Tahli Corin. A few months ago, Threshold had sent us a pass to “Mountain Goat Mountain,” an audio experience that asks you to gather a couple of props and then embark on a 45-minute journey through peak, lake and cave (also known as bedroom and combination living room/ kitchen) in search of a magical creature. The children have asked to do “Mountain Goat Mountain” again and again, and as it’s the closest we will come to actual travel for a while, I have agreed.

In this new piece, “Feather Quest,” an adult hides seven cards around the house and the children find them, creating the story of a bird — from egg to chick to fledgling. It has less replay value than “Mountain Goat Mountain,” as a lot of the pleasure comes from the surprise of finding what each new card asks. Still, everyone enjoyed creating a family bird song, trying to keep a feather aloft using only breath, feeding pretend worms to pretend chicks in a pretend nest and reading a message using a mirrored reflection.

On the following afternoon, in lieu of a working fireplace, we gathered around a cozy Zoom window for “The Hot Chocolate Incident,” a playfully designed escape-room style experience presented by a live actor from Improbable Escapes in Kingston, Ontario. The children, cast as trainee toymakers, had been invited to dress as elves, so one had selected a unicorn onesie, the other a zookeeper costume. Magic of Christmas, folks.

Our assigned elf, Jingles (Candice Burn), took us through some employee basics before spilling hot chocolate all over her keyboard. (Extremely relatable.) To rebuild the mainframe and speed Santa on his way, we had to solve various puzzles, some doable, others more challenging. I may have become somewhat short with Jingles during a Santa suit calibration riddle. Several other puzzles seem like they would be more fun to solve in person. Remotely, it was like watching someone else lick a candy cane. But despite a last-minute snowflake miscalculation, we managed to save Christmas. Which I consider a particular triumph because I am Jewish.

At night, we settled down with “Sleep Squad,” an online bedtime experience from the Story Pirates with a companion box that includes sleep mask, dream journal, stickers and night light. It stars the buoyant Lilli Cooper as Siesta Shuteye, the captain of a sleepy-time spaceship. She introduces three stories, created using the Story Pirates methodology — kids outline, trained improvisers riff and perform. It’s an entirely admirable approach and also somewhat crazy-making. Children don’t always have the best sense of narrative momentum. (Actually, neither do improvisers.) But mine enjoyed creating each story behind their sleep-masked eyes. And this is the first time in 20 years of theater criticism that I can unashamedly make this claim: The show put me to sleep.