A bizarre, grotesque meditation on tea that almost defies description

Yumi Umiumare’s latest gig – what else should we call this sprawling solo performance? – combines a Japanese tea ceremony with elements of kabuki, butoh and modern cabaret in a mediation on the healing power of ritual that is variously strange, grotesque and humorous. 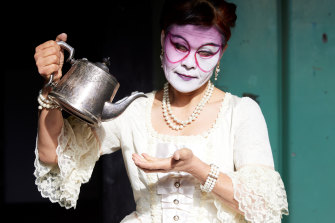 It begins with an extended prologue in which Umiumare chases the audience around the small front gallery with a tea trolley. Eventually, she settles by the window, pours herself a cup and gazes out at the late-night pedestrians lurching past.

The show then moves into a back room. Umiumare guzzles more tea while devouring a madeleine with the delicacy of a fox among chickens. Empty evening gowns descend from the ceiling and she dances with them. Lurid videos flicker on walls and screens like recovered traumas.

Next we move to a third space further from the street. Here is conjured the indignant spirit of Okuni, founder of kabuki. She rails against the exclusion of women from the theatrical art form that she invented in the 17th century.

After Okuni sheds her exquisite costume, we finally get our tea ceremony, which Umiumare accompanies with personal reflections on loss and mourning. Then the goddess Seiobo is praised in a dance-rock singalong.

Like successful initiates in a cult of the bizarre, we are then ushered into the sanctuary, the last room on our journey. This closet turns out to contain more video art – created by Takeshi Kondo – and an installation of dried palm fronds.

The final image is of a tea bowl mended with traditional gold joinery: a neat symbol for the way that ritual can restore a broken soul. The many fragments of this show do not adhere with the same smoothness but there’s much here that glisters all the same.