John Cornell – the man behind comedian Paul Hogan’s success and Kerry Packer’s confidante during World Series Cricket – has died at the age of 80 following a 20-year battle with Parkinson’s disease.

He was surrounded by his family, including his wife and television personality Delvene Delaney and children, at his home at Byron Bay. 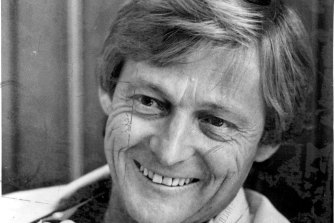 The career of John Cornell took off when, in 1971 when he met Paul Hogan.Credit:Ross Anthony Willis

“A classic Australian character, John Cornell made the lives he touched much richer, not only through donations, but also through his generosity of spirit, humour, humility and honour,” his family said in a statement. “A true egalitarian, John sought equity and equality, and fought for a fair go.”

His passing is being considered a blessing from those close to him, including former Nine boss David Gyngell, who considered him a father figure.

Cornell had many professions during his career, from journalist to nightclub owner to milkman to bookmaker, although anything he touched seemingly turned to gold.

His career took off when, in 1971 while working for Mike Willesee on A Current Affair, he met Paul Hogan, who had been interviewed on the program. 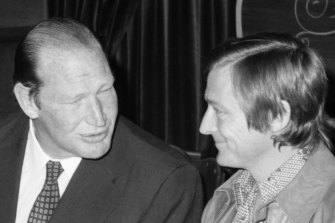 He became Hogan’s manager and later appeared on the hugely successful The Paul Hogan Show as the character Strop, the name he was often referred to by many during his life.

Together, in 1986, they produced Crocodile Dundee, which is still the most profitable Australian movie of all time having earned $47 million. Its sequel raked in $24 million.

In 1976, he left an indelible mark on Australian sport when he took to Packer the idea of World Series Cricket.

Cornell was in a Perth hotel room with businessman Austin Robertson and Australian fast bowler Dennis Lillee, discussing the poor pay and conditions of Australian players. 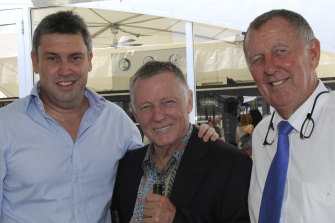 Discussion turned to a one-off match involving Australia’s best players, with a portion of gate takings and revenue given to them.

The person he had in mind was Packer, who was 40 at the time and a year earlier had inherited a media dynasty — including Channel Nine and Australian Consolidated Press — from his legendary father Sir Frank Packer.

The first season of WSC tanked, with moderate crowds and interest from any media outside of Packer’s sphere.

While Packer was convincing the Neville Wran NSW government to erect lights at the SCG for the second season, Cornell was marching up the steps of Sydney advertising agency Mojo in search of a jingle to capture the hearts of the Australian public.

Industry titans Allan Johnston and Alan Morris came up with C’mon Aussie C’mon! and it became so popular it was the No.1 hit on Australian singles charts for two weeks.

On November 28, 1978, with the song blaring through the loudspeakers, Australia played the West Indies in the opening match of the season.

The crowd swelled by the tea break, prompting Packer to order the gates to be open to the public waiting outside.

“That was the first time I heard the song and the crowd singing it,” Australian captain Ian Chappell said. “That’s when I felt we were the Australian side.”

An estimated crowd of 52,000 had filled the SCG. Cornell raced the figure to the press box and declared: “The people have found truth”.

“I don’t mean there haven’t been difficult moments, but John is probably the bravest man I know,” Delaney told News Corp last year. “He never complains, he never asks ‘why me?’, and he’s always trying to make sure other people are all right.”