‘A failing on our part’: DFAT didn’t consult minister before rebuffing Myanmar statement

Australia’s top diplomat has conceded officials should have consulted Foreign Minister Marise Payne before deciding not to join Europe, the United States and Britain in calling out the violent treatment of civilians by Myanmar’s military.

Senator Payne said on Thursday Australia would in all likelihood have signed the statement if it had been raised with her. 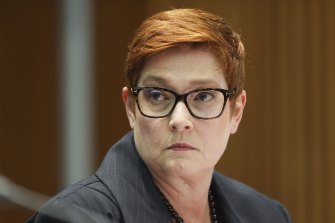 Foreign Minister Marise Payne concedes she probably would have joined the statement had she been consulted.Credit:Alex Ellinghausen

An Australian couple was last week caught up in the chaos of the military coup in Myanmar and placed under house arrest, and Australian officials continue to try to secure the release of economist Sean Turnell, whom the military has accused of attempting to flee Myanmar with “secret state financial information”.

In a joint statement released last week, the Myanmar embassies of the European Union, the US and the UK condemned the “brutal violence against unarmed civilians”, adding it was “immoral and indefensible”.

Appearing in a Senate estimates hearing on Thursday, Department of Foreign Affairs and Trade secretary Frances Adamson said her department “should have consulted the Foreign Minister” about signing up to the statement, which was “a failing on our part and we bear responsibility for it”.

Asked whether Australia would have joined the statement had she been consulted, Senator Payne said: “In all likelihood, yes.”

Ridwaan Jadwat, DFAT’s first assistant secretary for the south-east Asia division, said it was a “judgement made by the ambassador on the ground”.

“The embassy decided on this occasion it was not something they were going to join. Certainly we support the sentiments in the statement.”

The Australian embassy has repeatedly voiced its concern about the military’s crackdown on protesters, earlier this month saying: “We condemn the use of lethal force or violence against civilians exercising their universal rights, including the right to freedom of expression and peaceful assembly.”

Mr Jadwat said the situation in Myanmar remained “highly volatile”, with at least 250 people killed and more than 2300 individuals arrested since the coup began on February 1.

“Nation-wide protests and civil disobedience continues to grow and protesters are continuing to face an increasingly violent response by the military,” Mr Jadwat said. “The violent crackdowns on protesters of course are deeply concerning and they’re occurring around the country, not only in the major cities.”

In the past week, one man was shot dead and several were wounded when police opened fire on a group setting up a barricade in the central town of Monywa, while another person died when security forces opened fire on protesters in Mandalay, the country’s second-biggest city.

Australia on March 7 suspended a military co-operation program with Myanmar and redirected its aid commitments to non-government organisations but has not announced additional sanctions since the coup. Australia had previously sanctioned five members of the Myanmar armed forces, also known as the Tatmadaw.

Senator Payne said she was “continuing to take advice” on whether to sanction more individuals and was “reviewing that with colleagues”.

The Australian government has been urging the new junta to release Dr Turnell, an adviser to the nation’s elected leader, Aung San Suu Kyi, since he was detained on February 6, five days after General Min Aung Hlaing’s armed forces seized power.

DFAT officials revealed they had had their second opportunity for consular access with Dr Turnell, with a phone call taking place on Wednesday.

Matthew O’Kane and Christa Avery, a Canadian-Australian, who run a business consulting firm for project development in the troubled south-east Asian nation, have been receiving consular assistance from DFAT since being detained last week.