Originally published in 1957 and still in print six decades later, First Overland: London to Singapore by Land Rover is, in the world of Land Rover nuts, pretty much the Bible, says English historian and filmmaker Alex Bescoby.

The book was written by Tim Slessor, one of a group of enthusiastic British university students from Oxford and Cambridge who were the first to drive from London to the furthest point in mainland Asia, Singapore, and back. Apart from the sheer scale of the drive – about 15,000 kilometres each way – it involved navigating a 450 kilometre gap from Assam in north-east India to northern Myanmar that had only a track built 10 years earlier for fighting the Japanese in World War II. 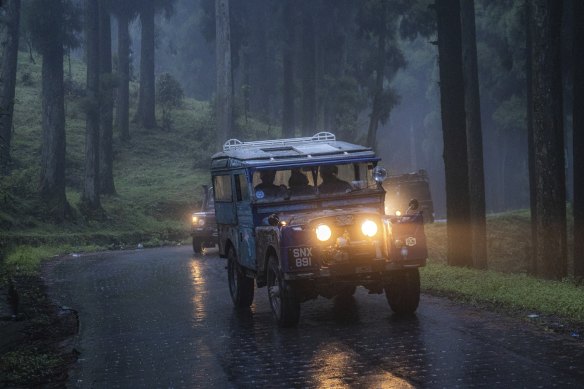 Oxford on the long trip to London

A chap at the BBC, David Attenborough, gave them a movie camera and they made three short films from the footage they shot.

Over half a century later Bescoby was mulling over what to make his next documentary film about, and First Overland kept coming up. Bescoby had been living in Myanmar and learnt about the wartime road through to India which had almost vanished.

Back in the UK, attending a 70th anniversary celebration for the Land Rover, he came across one of the vehicles – called “Oxford” as it was painted in the university’s characteristic blue – that had actually made the trip out to Singapore in 1955.

“I met Adam Bennett, the guy who restored the car,” says Bescoby. “I said to Adam, could I borrow it for a film. He said, you can borrow it, but only if you recreate the entire First Overland. He called my bluff and said we’ve got to go and meet Tim (Slessor).

“I thought I would go and meet him – he was still alive, in his late 80s – just to get his blessing to do it. Lo and behold, after one conversation I’d signed up to take him with me. I’d describe it as a series of escalating dares. It’s been the most extraordinary adventure of my life.”

So the plan for The Last Overland was hatched: Bescoby, Slessor and a support crew would fly out to Singapore and make a film of driving Oxford the Land Rover back to England following the original route as much as possible. With Syria and Iran now out of bounds they’d have to take a more northerly path through Central Asia.

Bescoby comes from a family of Land Rover enthusiasts but he had never shared his father and grandfather’s passion. “I’m a history nerd,” he says. “That was my thing. With the journey, the car for me was a literal vehicle to study the past. Before my first encounter with Oxford I was barely able to change a tyre. But very shortly into the expedition I realised what an incredible piece of machinery it was and is.

“Sixty-five years after it came off the production line it’s still capable of driving into the most dangerous, difficult roads on earth. I developed so much respect for the incredible simplicity of it.” 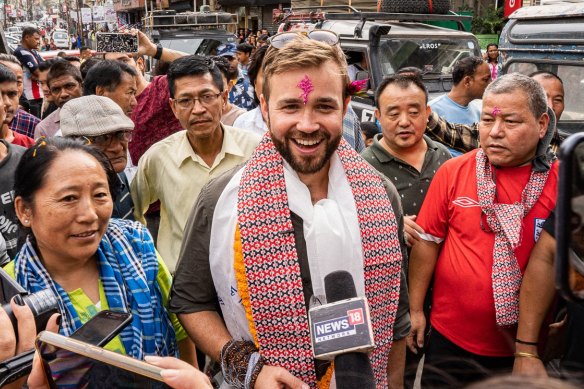 On the road again: Alex Bescoby in a scene from The Last Overland: Singapore To London.Credit:SBS

In an early scene we see Slessor tutoring Bescoby in the art of the driving the vehicle, having to explain double de-clutching, the old-school method for changing gears. “Are you listening Jeremy Clarkson? This is motoring!” the octogenarian hoots.

Proper motoring in vintage cars comes at a price. Thanks to primitive ventilation and suspension, and holes in the roof, Bescoby says the car’s occupants are always acutely conscious of the conditions outside.

“The thing that I get now about why people love driving vintage cars, particularly from that era, is it is impossible not to be present whilst driving a 1955 Land Rover. It’s so easy now in our comfortable modern cars, we have music, podcasts, audiobooks (you can get an audiobook of Bescoby’s account of The Last Overland), anything to distract us, as we cruise-control our way to our destination.

“But when you’re on the journey of a lifetime like this you want to be taking in every minute. You’re going through incredible places, cultures, environments, many of which I’ll never go back to, and the beauty of Oxford is that for all the distance, the noise and lack of power steering and lack of proper brakes and lack of syncromesh gearbox, you’re there, you’re absolutely there.”

The original expedition depended on paper maps, sometimes decades out of date, had to carefully plan fuel consumption because there weren’t petrol stations every 80 kilometres like there are now, and was unable to communicate with home for weeks at a time. The car was at the time cutting-edge technology, so in many places they passed through there were no mechanics who would be able to help them.

In contrast, the modern crew enjoyed all the benefits of the telecommunication age. For example, Bescoby says, he would videocall his mum from the back of the car.

Still, physical challenges remained. For one thing, their vintage four-wheel-drive didn’t go any faster than it did when it was new. “If anything, Oxford was going a little bit slower,” Bescoby says. “When you’re in Tibet and it’s below zero at night, you’re going up 5500 metres with altitude sickness, in a 1955 Land Rover, that is brutal. I think that’s when we earned our stripes as true Overlanders, not just retracing someone else’s journey!”

The Last Overland: Singapore to London is on SBS Viceland, Saturday 8.30pm