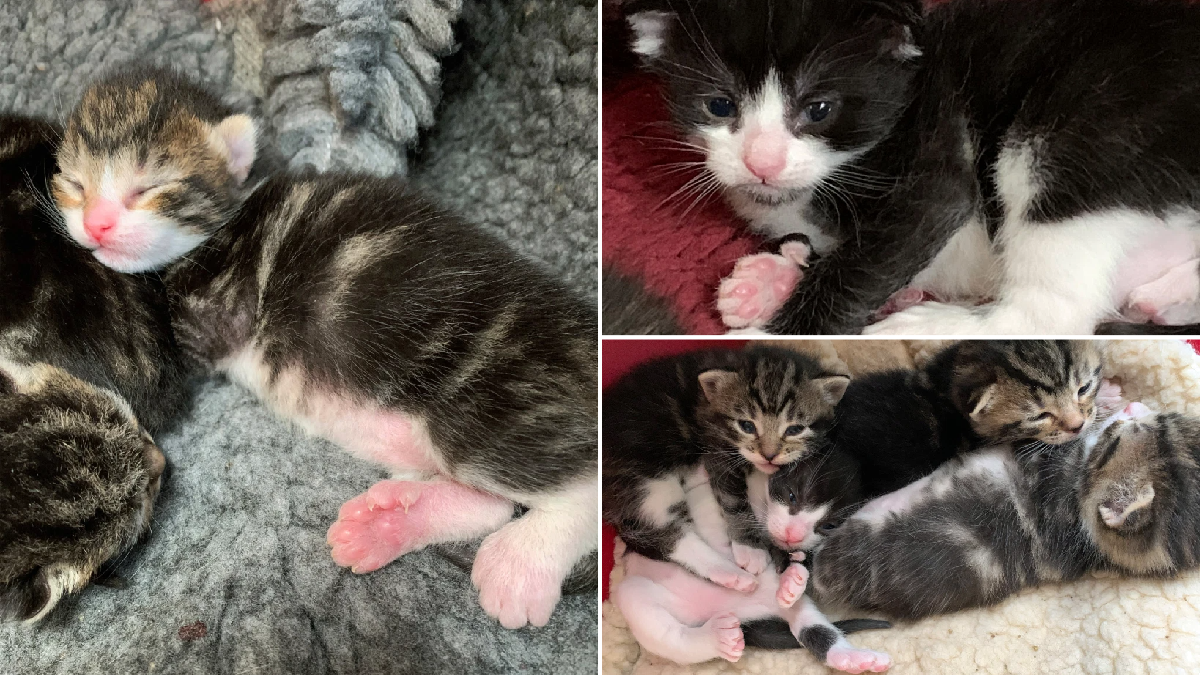 A trio of kittens has been born with extra large paws and a grand total of 12 extra toes.

The kitten’s mother, Martha, is around one year old and was living as a stray in the grounds of a Gosport retirement complex.

The residents liked to feed her and advertised to find out if the tabby had an owner, but to no avail.

When no one claimed her, a member of the public got in touch with Cats Protection in Gosport, as they were concerned that Martha might be pregnant.

As it happened, they were right, and Martha gave birth to four kittens a week after she was taken into the care of the charity.

Now three weeks old, three of the kittens are polydactyl, or ‘many fingered’.

Cats typically have 18 digits, including their dew claws, but between the four kittens and their mother, they’ve got 102 digits rather than the standard 90.

Martha and baby Miller both have the expected amount of toes, while Miller’s siblings have a few more.

Black-and-white Ernest has five toes on each paw, including elongated dew claw ‘thumbs’.

The kittens were given those names because writer Ernest Hemingway is said to have been given a six-toed cat named Snow White by a sailor.

Today, over 60 polydactyl cats, likely descendants of Snow White, live on Key West – the Florida island where Hemingway once lived.

Martha and her babies will be able to leave the branch for their forever homes once the kittens are at least nine weeks old.

While not common, polydactyl cats can also be found up and down the country and, in most cases, the genetic condition doesn’t case any harm.

Kate Stapleford, Branch Coordinator, says: ‘Kittens are always a delight, but to have three polydactyl kittens is extremely unusual.

‘I’ve been fortunate in fostering several single cats over the years who have been polydactyl and remember back in 2012 the branch had two littermates who were polydactyl, but I’ve certainly not cared for three polydactyl kittens at once before.

‘Although the kittens are gorgeous and are taking advantage of their extra digits by learning to walk and climb over each other as soon as they can, Martha was a young mum and pregnancy, especially in stray cats, can have many risks.

‘All cats that leave Cats Protection care are neutered, or if they are too young, as in the case of Martha’s kittens, we will liaise with the new owners to arrange a convenient time for neutering and second vaccinations which we will arrange and pay for on their behalf.

‘We also encourage existing cat owners to have their own cats neutered as early as possible and are able to assist anyone who is struggling to afford the operation for their cat with vouchers to cover the cost, which can be redeemed at local vets.’