Australia’s teacher workforce is ageing as younger people turn away from the profession, sparking a warning that schools will not be able to meet demand as student numbers grow.

A national survey of 32,000 teachers – the biggest of its kind – has also found that full-time teachers work an average of 55 hours a week, much of it unpaid, and that overwork is the biggest reason many are contemplating exiting the profession. 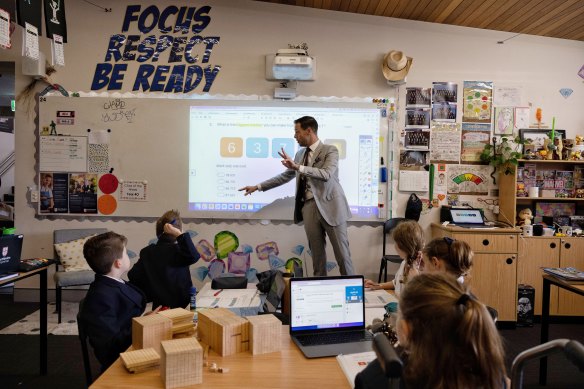 Full-time teachers work an average of 55 hours a week, much of it unpaid, a national survey has found. Credit:Nick Moir

The Australian Institute for Teaching and School Leadership, a national authority that surveys teachers annually, said the data underlined the need for Australia to do more to both attract and retain its teachers.

However, the number of people starting a teaching degree fell by 19 per cent, the institute’s data shows.

The survey was done in 2020, meaning the full impact of the pandemic on Australia’s teaching workforce has not yet been measured.

Mark Grant, the chief executive of the Australian Institute for Teaching and School Leadership, said the only shining light in the data was the fact the proportion of teachers considering exiting the profession had shrunk from 26 per cent to 21 per cent.

But he said these figures did not take into account the full effect of the pandemic, and that further action was needed to address teacher supply.

“There isn’t a quick fix, and we are working closely with the Australian government and states and territories, as well as [initial teacher providers], to form solutions to workforce challenges whilst ensuring we don’t compromise quality teaching for Australia’s four million students.”

Federal Education Minister Jason Clare said the data confirmed what he had been saying about overwork among teachers.

“The idea that teachers rock up at 9am and finish at 3pm is rubbish,” he said.

“They work longer hours than teachers in many other countries, but less time in front of a class. Only 40 per cent of the hours our teachers work involve face-to-face learning.”

Clare said if teachers had more time to teach, they would be more effective and less likely to leave the profession.

In Victoria, government school teachers will have their face-to-face teaching hours reduced by 90 minutes a week in the next two years, in an attempt to alleviate their workload.

But the deal, brokered between the state government and the Australian Education Union, requires the recruitment of an extra 1900 teachers into the government education system. Catholic teachers are fighting for the same conditions, meaning Catholic schools in Victoria would also have to recruit hundreds more teachers.

Grant said retention of the current teacher workforce was every bit as critical as attracting new people into the profession.

A national action plan on the teacher shortage is due to be handed to governments in December, focusing on five areas, including elevating the status of the profession, strengthening initial teacher education and maximising time to teach.