Agony of fighting for my child in the family courts… by a family lawyer: To warring parents, the secretive family courts can be a terrifying ordeal. Now, in a blisteringly candid account, a lawyer who worked in them for 15 years reveals how, when she found herself in her clients’ shoes, it almost destroyed her

Looking back, I can see the awful irony of my situation. There I was, a family law barrister of 15 years’ experience, being cross-examined in the family court by my ex-partner and sobbing uncontrollably as he accused me of lying in an attempt to restrict access to our young daughter.

Each word stabbed me. I had made up the fact of his abuse, he claimed; I had never supported contact with Adele; he had never assaulted me. I was the toxic, manipulative one, not him.

He was calm, even apologetic, and apparently convincing. Meanwhile I could barely speak, so traumatised did I feel. The whole thing was a nightmare, even for me, with all my insider knowledge and training. If I found the family courts so callous and humiliating, then how much worse must it be for women without any experience at all of how they work?

Going to court had not been my choice. Proceedings had been brought against me because I would not let Adele stay overnight at my ex’s flat owing to his physical and emotional abuse, including breaking my hand. 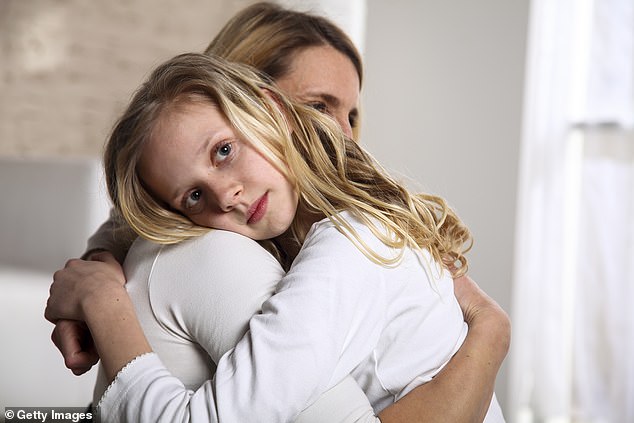 Michelle Goodman, who was a family law barrister for 15 years, recounts going against her ex in court after refusing to allow their daughter Adele to stay overnight at his flat (file image)

At one point during the two-day case, the male judge even commented sarcastically on my ‘anxious demeanour’, as though my anxiety at being made to sit just feet from my abuser was somehow an abnormal reaction.

My own domestic saga surely proves what many women who have been through the family courts know all too well: that the system is failing us at best, and bullying us at worse.

What’s more, the family courts’ in-built lack of transparency, with hearings held behind closed doors and judgments not always published, means they can, in effect, act with impunity and mask bad practice.

Earlier this summer, an investigation into the justice system by the charity SafeLives, spearheaded by the Domestic Abuse Commissioner Nicole Jacobs, concluded that nine out of ten women get no support through the family courts.

Far from dealing with them sympathetically, the entire system risks retraumatising victims, says the damning report. The family courts — and a ‘lack of understanding’ from judges — undermine, ‘belittle’ and even frighten the very people they are supposed to help.

Small reforms are making it easier — the 2021 Domestic Abuse Act banned the cross-examination of victims by those they accuse — but that came too late to help me, and still does not deal with what I came to feel was a generally unfeeling attitude from powerful figures in the court.

I wasn’t even allowed to sit behind a screen, and the judge simply ignored my sobs, positioning his body so that he could not see me crying.

I am not an easily intimidated person. The morning of the court case, I kissed Adele goodbye, feeling confident and strong. I was going to do what I had advised countless women before: ‘Stand in your truth and tell your story.’ But the reality of being questioned by my ex left me feeling helpless and vulnerable. 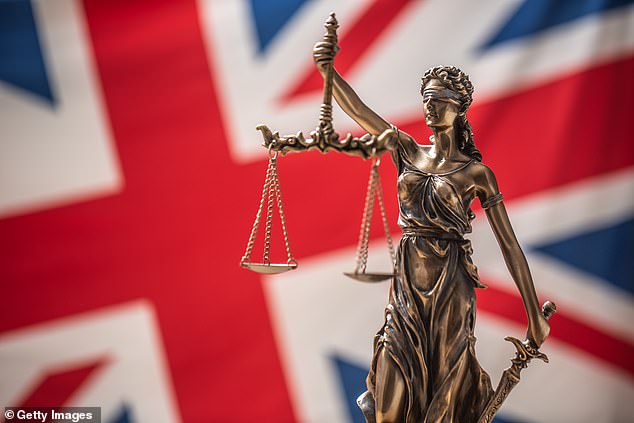 Jonathan and I met at a party and he pursued me. When I became pregnant after two years, he was thrilled and asked me to marry him.

There were warning signs. He could be charming and considerate, but then criticise my weight or my intelligence. Once, while I was pregnant, he shouted at me in the street for not being ‘cheerful’ enough to his friends, stormed off with my bag, then locked me out of my own flat.

I was distraught and realised I had made a terrible mistake having a child with Jonathan.

He disappeared for days but then turned up at my 20-week scan, acting like a loving father-to-be for the hospital staff.

After Adele was born by emergency C-section, I contracted a severe post-operative infection and was readmitted to hospital twice. I experienced post-natal depression. Jonathan seemed bored and irritated by my illness.

Then, when Adele was still a baby, he began shouting at his teenage son while holding her. His son was crying, Adele was hysterical and I was frightened, pleading with Jonathan to give her to me.

He moved back to his own flat. We were still a couple but later, just before Adele turned two, I ended the relationship. I couldn’t bear for my daughter to grow up in a toxic environment where her mother was afraid of her father.

Jonathan began a new relationship, but occasionally he tried to persuade me to get back together with him. Our daughter lived with me and Jonathan had access to her whenever he wished, but he often missed arrangements to go on holiday.

In 2017, after I moved away from London, Jonathan began demanding that Adele stay overnight at his flat. I felt she was not emotionally ready and feared exposing her to his temper, yet I wanted her to have a relationship with her father. So each summer we spent time with Jonathan’s extended family. It wasn’t always easy, but we made it work. 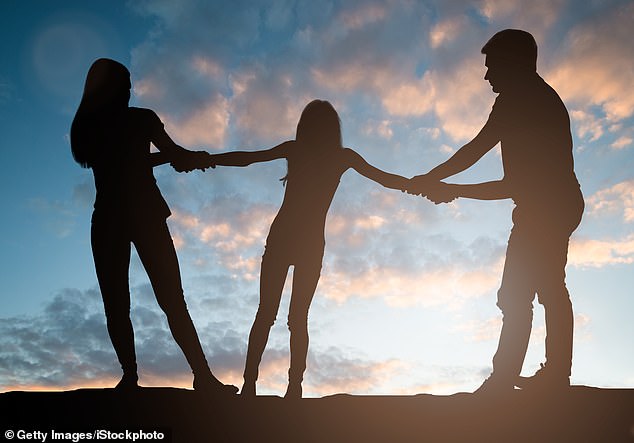 Then, in 2019, while on one of these breaks, Jonathan accused me of denying him contact with Adele, and said I was jealous of his new girlfriend.

For the first time I was angry, not scared. I stood over him and remonstrated. He accused me of ‘crazy behaviour’, grabbed my right hand and squeezed it hard. There was an audible click. I was in shock and excruciating pain.

Later, in court, he claimed he was trying to protect his face and we had ‘accidentally clashed’. I knew Adele could be taken away from me if I’d failed to protect her in a situation of domestic violence, so my main concern was to get us home safely.

Back home, an X-ray revealed a fracture. The doctor sent me to the hand trauma clinic and gave me a leaflet on domestic abuse. My mother insisted I report it to the police and social services.

As a barrister, I’ve advised countless women to do this, but as I told the police officers that my partner had hurt me, I could feel myself shrinking with shame. In the end, I chose not to pursue charges because it would mean Jonathan would lose his job.

After three months when he disappeared from her life, I arranged for Jonathan and Adele to meet in a third-party contact centre on alternate Saturdays and every Tuesday. By this point, he owed me thousands in agreed child maintenance. When he later lost his job, he said he wouldn’t pay his share of her school fees.

It was in late 2019 that I was served with a child arrangement application stating that Jonathan was not getting fair access to Adele and that I had made a false allegation he had broken my hand. It now fell to me to prove that there had been domestic abuse.

At the initial hearing at the beginning of 2020, Jonathan had legal representation and I was what is known as ‘a litigant in person’. I felt bullied and belittled. I realised I wouldn’t get a fair hearing unless I ‘lawyered up’ — so that’s what I then did. 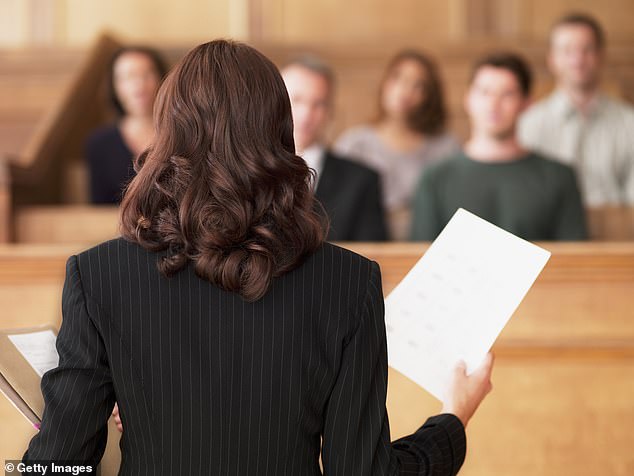 Michelle said the judge refused to accept other examples of Jonathan’s coercive and threatening behaviour, minimising his conduct as ‘inappropriate parenting’ (file image)

I provided our contact schedule for the past three years, showing where Jonathan had missed or cancelled sessions with Adele, sometimes at the last minute, proving that his application had no merit. It was disregarded by the court and the magistrate patronisingly said to me: ‘We must look forward now, Ms Goodman, and not dwell on past events.’

A two-day fact-finding hearing was listed in November 2020. Jonathan was super-charming, though it seemed to me obvious that his evidence didn’t hold up.

A few weeks later, the judge found that, in his opinion, there had been no history of domestic abuse during our five-year relationship and granted Jonathan unrestricted access to Adele.

The judgment was like a character assassination — I was portrayed as jealous and out of control. The comments felt deeply personal.

From a family law perspective, Jonathan was not guilty of assault but had fractured my hand in self-defence.

The judge suggested that I had been angry because I had seen photos of Jonathan and his new partner on his camera. He questioned why I did not leave the holiday.

He refused to accept other examples of Jonathan’s coercive and threatening behaviour, minimising his conduct as ‘inappropriate parenting’. Jonathan’s contact arrangements with Adele were fully restored.

For months afterwards, I couldn’t sleep, or I woke in the early hours crying. I suffered hair loss and severe depression. At times, I even felt suicidal. I still can’t return to work. 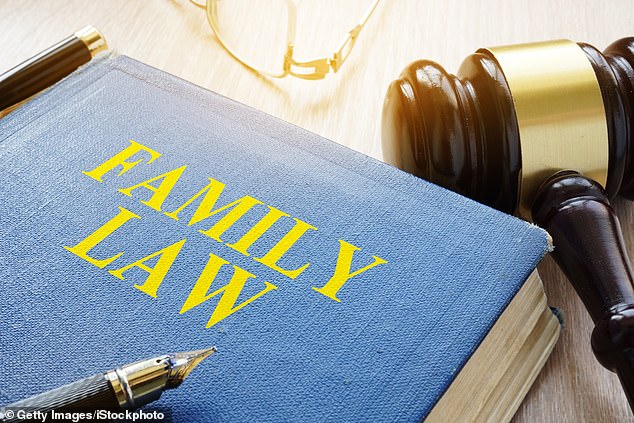 My experience convinced me the family court is not safe for women and children who are victims of abuse.

I was telling the truth, had medical and police evidence, and had done everything ‘right’. Yet I lost the case.

I felt shamed into silence, when all I’ve done is to have a baby with the wrong man.

After a while, I decided that I wouldn’t accept defeat without a fight. I contacted barrister Dr Charlotte Proudman, who had recently represented two women appealing against judges’ orders dismissing their allegations of rape, domestic abuse and coercive control by a male partner.

With her backing, I decided to appeal. The stakes were high: if I was successful I could have a rehearing, but if I lost then Jonathan would continue to have unfettered access to Adele and would use his court victory against me.

My appeal this year was heard over a video link. This time, the judge said the previous judge had minimised the domestic abuse by regarding it as ‘inappropriate parenting’ and this was ‘wholly inappropriate’ and ‘not what one may expect a judge of the family court to condone’.

As a mother, he said, I was a vulnerable witness and the court should have implemented special measures as I gave evidence. 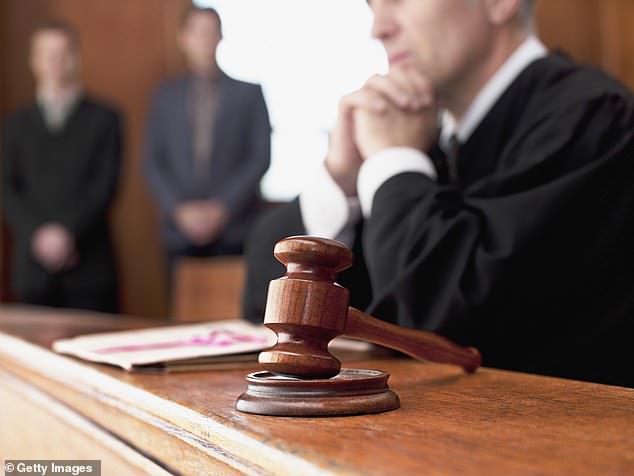 When Jonathan argued with him, he said: ‘I am the judge here, and I’m not used to being questioned about my judicial decision-making.’ Eventually, he overturned the decisions made in the 2020 ruling, upheld my appeal against the original judge’s findings and ordered a rehearing of my case. I had won!

While we await the new fact-finding hearing, Jonathan is only allowed contact with Adele that I consider safe and in her interest. My barrister has given me back my life, and I’ll always be grateful to her. But after £24,000 in legal fees, I’m back where I started. I have to go to court to prove there was domestic abuse during the relationship and after the separation, and that I have not denied Jonathan access to his child.

I feel too traumatised to go back to my legal career but want to work in domestic violence and women’s advocacy in the future.

Judges and magistrates should have training around the complex issues of domestic abuse if we are to reform the culture of family courts. The system as it stands is appalling.

Had I not lived through it, on the other side of the fence as it were — not as a family court lawyer but a victim — I wouldn’t have believed it.

some names have been changed to protect identities