A section of Los Angeles’ famed Hollywood Boulevard will be shut down all week so that crews can install a permanent mural honoring the Black Lives Matter movement, CBS Los Angeles reports.

One block between Highland Avenue and Orange Drive will be closed so that workers can paint “All Black Lives Matter” across the street. This stretch of the boulevard includes the iconic TCL Chinese Theatre and El Capitan Theatre.

The mural will serve as a permanent tribute after one of the largest demonstrations Hollywood has ever seen. A massive protest down the boulevard was held on June 13, when tens of thousands of people marched against racism and in solidarity with the Black LGBTQ community.

That demonstration followed the killing of George Floyd by police in Minneapolis on May 25, which sparked nationwide protests for weeks.

Ahead of the Los Angeles rally, “All Black Lives Matter” was painted down Hollywood Boulevard. The original mural, which was painted by volunteers, also included the colors of the rainbow LGBTQ flag and the Transgender Pride flag. 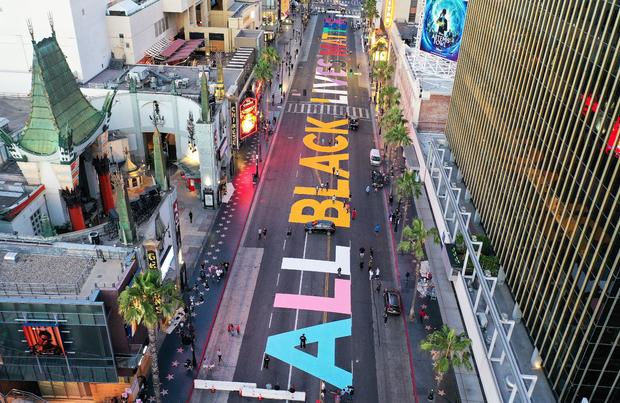 However, a few days after the march down the boulevard, crews began to scrub off the letters, CBS Los Angeles reports. They removed three letters before L.A. City Councilman Mitch O’Farrell stopped them. O’Farrell, who attended the march just two days prior, introduced a motion to create a permanent commemoration of the movement.

“We had a once-in-a-generation moment this weekend in Hollywood as tens of thousands gathered for a peaceful demonstration on one of the most recognizable boulevards in America,” O’Farrell, who is openly gay, said in a statement, according to CBS Los Angeles.

“We now have a chance to memorialize the movement in a meaningful way. I look forward to working with BLAC (Black LGBTQIA Action Committee) and other community members on this project,” he continued.

The motion to make the mural permanent in Los Angeles was passed by the city council on August 19, CBS Los Angeles reported.

“Today, after years and years of violence against our Black and Queer communities, we are creating the first memorialized space in Los Angeles dedicated to transgender people of color,” O’Farrell said in a statement.

The section of Hollywood Boulevard is set to be closed until Friday, when the mural is expected to be completed.