When Amanda Lohrey was asked to prepare an acceptance speech should she win this year’s PM’s Literary Award for fiction she was determined to put the opportunity to good use – even if she didn’t have much time.

“When I was told I had to write a one-minute speech, that was my first thought, that this was my chance,” Lohrey, who on Wednesday won the $80,000 prize that completes a hat-trick of awards for her much-lauded seventh novel Labyrinth, says.

“Australian literature has never been richer or more diverse, so it was a great shock when our oldest university – Sydney – recently abolished its chair of Australian literature,” Lohrey said in her speech, delivered by her long-time literary agent Lyn Tranter at the ceremony at the Sydney Opera House.

“I look forward to the day when the university reestablishes an institution that any self-respecting nation should be proud to showcase.”

The position of chair – the oldest of its kind in the country – has been vacant since Professor Robert Dixon retired in 2019 with the university saying it was “working to secure funding” for an endowment for the role.

“Australian literature is the story of nationhood. It’s the story of who we are. That’s why I said that any self-respecting nation would want to highlight it,” Lohrey says. “For such a small country, it’s an astonishing and diverse literature. It tells the story of our nation.”

Lohrey’s The Labyrinth is a spare tale of a woman moving to a coastal town near where her son is incarcerated and gradually coming to terms with the losses, absences, and feelings of guilt in her life. It won Australia’s most significant literary award, the $60,000 Miles Franklin, in July, and more recently the $5000 Voss award. 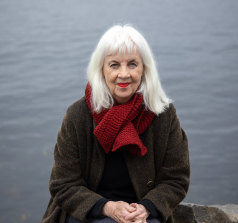 Amanda Lohrey has added a PM’s award to her tally of prizes for The Labyrinth.Credit:Peter Mathew

Lohrey, 74, said the prizemoney would allow her to focus on her next novel without worrying about the need to work to supplement her income.

“Australia is a small market and you can sell relatively well but still not make enough money to make a living. These awards are actually more important in small markets.”

The Tasmanian writer wasn’t the only one to finish 2021 with three major awards. Cath Moore received the PM’s young-adult writing prize for Metal Fish, Falling Snow after winning the YA category in the Victorian Premier’s Literary Awards and the Queensland Literary Awards.

And Grace Karskens won the Australian history prize for People of the River: Lost Worlds of Early Australia, having already received two major history prizes – the NSW Premier’s and the Ernest Scott – for the work described by this masthead as “a historical epic of place, one that not only stretches back into the deep past but also forward to today …”

The non-fiction prize was won by Quentin Sprague for The Stranger Artist: Life at the Edge of Kimberley Painting, his account of Tony Oliver’s long experience in the East Kimberley and the establishment and eventual demise of Jirrawun Arts, the body for Indigenous artists of the region.

Stephen Edgar won the poetry award for his new and selected poems, The Strangest Place, published by the tiny Melbourne press, Black Pepper. The children’s literature award was shared by Remy Lai for Fly on the Wall and Meg McKinlay for How to Make a Bird, with illustrations by Matt Otley.