Andrews set up a ticking time bomb for his anointed successor

The latest round of internal promotions inside the Andrews government has sparked fresh resentment and restlessness inside Victorian Labor, just five months from the election.

And it is hardly a surprise. 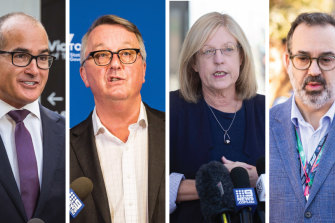 Would-be successors had patiently bided their time on the backbench or in lower ministerial roles waiting for their chance to rise through the cabinet ranks. Not everyone was going to be happy with the outcome.

Armed with the knowledge that some of his most senior colleagues would leave at the election, Daniel Andrews was able to orchestrate their joint resignation and line up replacements before contenders could mobilise.

Andrews made it clear he wanted his long-serving ministerial colleague Jacinta Allan as his deputy to replace Merlino. Allan comes from the premier’s Socialist Left faction, meaning the group would have control of the two most senior positions in the party.

Regardless, he was always going to get his way.

There was a brief push to install Ben Carroll, once an adviser to former communications minister Stephen Conroy, as deputy, backed by his sub-faction of Labor Right.

But the plan hit a roadblock when the rest of the Right made it clear that they would support Allan, leaving him to instead take the expanded role of Co-ordinating Minister for the Department of Jobs, Precincts and Regions.

In one of the oddities of factional politics, Allan’s appointment as deputy found more opposition from within her own faction, with several MPs pushing for an internal ballot for the newly vacant deputy and ministerial positions.

None of this should take away from Allan’s ability to do the job. Having racked up almost a quarter of a century on Spring Street, Allan has almost unmatched ministerial, party and parliamentary experience.

Had she been overlooked, especially for a man, it would have tarnished the Andrews government’s progressive agenda.

Andrews also moved swiftly to fill power vacuum left by his departing ministers, and demanded two of his factional allies – Sonya Kilkenny and Harriet Shing – join him at the cabinet table. In doing so he risked alienating other Left MPs who demanded a vote. 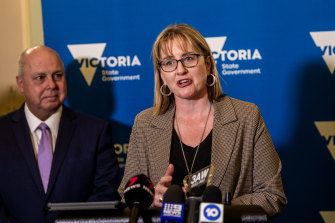 Andrews was said to be frustrated the pair had missed out on previous promotions. He wasn't going to sit by and let it happen again.

As part of the deal to install Allan, former Speaker Colin Brooks, Steve Dimopoulos and Lizzie Blandthorn have all entered Cabinet.

“He couldn’t have done it in any more brutal way,” one cabinet minister observed.

Wielding such political power might seem the right of a party leader, but it’s not how things have been done in the past. Few have had Andrews' internal authority.

As premier, Andrews may have governed in a presidential-style during the pandemic, but traditionally Labor premiers have taken a more consultative approach, or at least given the perception that there were democratic processes at play.

When discussing the latest caucus discontent, several cabinet ministers agreed that the collective anger of those who missed out would peter out in the lead-up to the election.

Nothing so concentrates the mind as the risk of losing one’s seat.

“It’ll be a short-term disappointment; you take the blow, and you get on with it,” one cabinet MP said.

There will also be rewards for those who keep their anger to themselves. On Wednesday night the factions met to divvy up the remaining positions such as committee chairs and whips roles, substandard prizes for those who missed out.

While Andrews’ power play has put noses out of joint, he will probably avoid a public fight that would give voters a glimpse into the messy world of factional politics and leave them wondering; If Labor can’t govern itself, how can it gain the confidence of the public.

But what happens after the election?

Much of Andrews’ internal authority is tied to his electoral success. Boosting Labor’s already healthy margin will be difficult to achieve in November, particularly in outer suburban electorates where voters are showing signs of turning away from Labor.

Discipline is likely to last until polling day, but rivalries will no doubt re-emerge once the contest is over.

Andrews has exercised internal authority, but may have set up a political time bomb which, while ticking, is unlikely to explode until he departs his office at One Treasury Place.

By installing Allan as his deputy, colleagues believe Andrews has signalled his pick as his replacement. It will be up to her to deal with the factional brawl.

Allan may be the right woman for the job now but she doesn’t have majority support from Labor’s caucus. If Andrews leaves in the next term of government, as many of his colleagues predict, it’s unlikely to be a seamless handover. Disgruntled MPs who feel overlooked are expected to exact revenge.