Australia has fallen behind Europe and North America in securing more supplies of the Pfizer vaccine for future years, as nations start buying booster shots to prepare for new coronavirus strains.

Health Minister Greg Hunt said the government would act on advice from Commonwealth medical experts to buy more doses if required to add to contracts that promise 66 million doses from the end of this year. 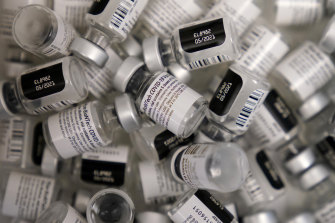 The EU has a contracts with Pfizer for as many as 2.4 billion doses – more than five times the population to be covered – in the years ahead.Credit:AP

The federal plan depends on one supplier, Novavax, for 51 million doses as well as 15 million booster shots from Moderna, which uses a similar messenger RNA technology to Pfizer.

But other countries are moving more quickly to cement bigger deals with Pfizer for the years ahead, led by European Union contracts for as many as 2.4 billion doses – more than five times the population to be covered.

The Canadian government struck an agreement with Pfizer in April to buy up to 125 million doses of the company’s vaccine in 2022 and 2023, more than three times the country’s population.

The competition for future deals comes as Prime Minister Scott Morrison fights claims the government was too slow to sign a deal with Pfizer last year and did not do enough to diversify supply, leaving the country exposed when problems emerged with the AstraZeneca vaccine manufactured by CSL in Melbourne.

Reminded on Monday of comments he made earlier this year that the vaccine rollout was “not a race”, the Prime Minister said the remark was made at a time when Australia had low rates of COVID-19.

“Those comments were made at a time when we were talking about the approval of those vaccines by the official bodies here in Australia,” he said.

The government is confident of gaining one million doses each week from Pfizer from July 19 under a contract to receive 40 million doses this calendar year, but it is yet to confirm any agreement with the company for future years. 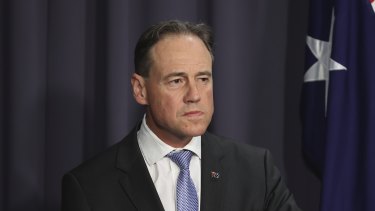 Health Minister Greg Hunt said he would arrange for more booster shots if the medical experts recommended the move.Credit:Alex Ellinghausen

Mr Hunt said he was working with the Scientific and Technical Advisory Group and would arrange for more booster shots if the medical experts recommended the move.

“At this stage, we have very significant numbers, more than enough to vaccinate the nation. And one thing which has not been determined is whether a booster would be a one-shot or a two-shot program. So those are medical questions to be determined over the coming months,” he said.

Scientists expressed caution about the importance of the long-term contracts, with some saying there would be enough vaccines next year based on mRNA as well as on the protein sub-unit design used by Novavax.

“I think we will have boosters next year and there’s going to be a glut of vaccines in the world, so we’ll be fine,” said Robert Booy, a professor in paediatrics, vaccinology, epidemiology and infectious diseases at the University of Sydney.

“The supply of protein-based vaccines like Novavax will be great, having the possibility of the Johnson & Johnson with one dose will be good, and Moderna will be coming good soon.”

Sanjaya Senanayake, an infectious diseases specialist and associate professor at the Australian National University, said the country had to avoid putting “all its eggs in one basket” with one or two vaccines.

“We’re going to have to live with COVID, and that means living with variants and having to adjust our vaccine strategy for that,” he said.

“One of the lessons of the last year is don’t rely on anyone else for your vaccines.”

Dr Senanayake said there would be many choices in addition to Pfizer, with 32 coronavirus vaccines in Phase III trials and many others at an earlier stage.

The government dismissed a report from the ABC on Monday saying former prime minister Kevin Rudd had spoken to Pfizer chief executive Albert Bourla about increasing supplies to Australia.

Pfizer’s Australian office said the report was not accurate, adding: “the only two parties involved in these agreements are Pfizer and the Australian government”. Mr Hunt described the report as a “grassy knoll story” but Mr Rudd responded on Twitter to say he had never claimed responsibility for any Pfizer decision to increase the Australian shipments.

The Canadian government’s deal with Pfizer for 125 million doses covers 2022 and 2023 and comes with an option for a further 60 million doses in 2024.

Assuming two doses of the Pfizer vaccine per person, the Canadian agreement is enough to inoculate the entire population of 38 million, across all ages, more than twice.

Canada has separate agreements for 76 million doses from Novavax and 38 million from Johnson & Johnson.

The EU agreement with Pfizer and BioNTech also stretches over several years, in addition to 600 million doses promised for this year.

The EU signed in May to buy 900 million doses on a monthly schedule beginning in December this year and continuing into 2023. This comes with an option to buy another 900 million doses, taking the total to 2.4 billion.

Assuming two doses, the agreement is enough to inoculate the entire EU population of about 450 million people at least twice. The EU also has an agreement with Novavax for 200 million doses.

Stay across the most crucial developments related to the pandemic with the Coronavirus Update. Sign up to receive the weekly newsletter.