Australia, we need to talk about tax

The government has a problem with the r-word. No, not recession. I’m talking about revenue.

During the pandemic, the government borrowed more than it made to pay for vital measures including vaccines and to keep the economy afloat, through programs like JobKeeper. 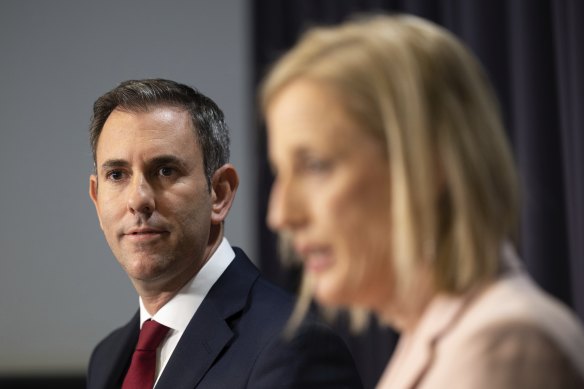 That’s left Treasurer Jim Chalmers and Finance Minister Katy Gallagher in a bit of a pickle.

Labor won government in May with a promise to expand access to childcare, improve higher education and job training and improve the working conditions for millions of Australians across sectors including health and aged care.

This is where the whole debate over stage 3 tax cuts has come in over the last week. But any changes to those income tax cuts will simply save the government more money, when many experts believe a more drastic approach is needed.

So let’s take a look at where the government gets revenue from currently, and what it could do to improve that.

Data from the Organisation for Economic Co-operation and Development put Australia at 30th out of 38 OECD countries when it came to its tax-to-GDP ratio, and below the OECD average of 33.4 per cent in 2019.

But when it came to income tax, Australia was number two. So, income tax is, clearly, the mainstay of government revenue. We’re also a far cry from many European countries as well as Japan and Korea when it comes to total tax collection.

This is a problem when you look at the current state of the budget books and what the government wants to get done.

The country doesn’t have a trillion dollars of debt, as the government likes to say, but it is close, with gross debt set to reach $977 billion this financial year.

As anyone with a mortgage knows, a large amount of debt comes with a hefty interest bill. In a speech at the Australia Institute’s revenue summit last week, Assistant Treasurer Stephen Jones said that by next year the size of the interest bill will outstrip the cost of subsidising all the medications on the pharmaceutical benefits scheme.

The government also needs more money to spend. If it only includes election promises in its first budget in two weeks, it will need to find an extra $2.4 billion just for this financial year to pay for programs like expanded free TAFE spots and mental health support for children. And that’s before we get to Labor’s signature subsidised childcare promise, which will cost the government $1.5 billion alone in 2023-2024.

So, what can the treasurer and the finance minister do about it?

Well, you would be hard-pressed to find an economist who doesn’t believe the country needs tax reform in some way.

But former governor Bernie Fraser pointed out Australians expect high-quality services, which makes spending cuts difficult, and any savings from axing Coalition programs would be minimal.

“The government … has to have access to revenues to be able to follow through and develop those reforms that it’s proposing to make,” he said at the Australia Institute’s revenue summit last week.

“We don’t want the package of measures to end up being another aspiration that’s gone awry because of a lack of funding.”

Handily, the government wouldn’t have to look far for tax ideas if it wants to expand revenue, as there’s one Labor prepared (much) earlier: the Henry tax review.

Published by then-Treasury secretary Ken Henry in 2010, it recommended a swathe of reforms to Australia’s tax system. Despite the fact it has been largely gathering dust in the bowels of Parliament House since then, the review contains plenty of ideas that are still relevant today.

As well as making the personal and company income tax systems more simple, the Henry review recommended new taxes including a resources super profits tax, which would see large mining companies hand more of their profits back to Australia, changes to road transport taxes, replacing stamp duty with land taxes, and the Carbon Pollution Reduction Scheme, more familiarly known as the carbon tax.

The government’s problem is that it went to the election promising no new taxes.

And it’s interesting that among the flurry of summits and round tables and combined state and federal meetings hosted by various ministers in the government’s first few months in office – on child care, housing, jobs and skills – there has been no mention of a similar summit on tax.

Perhaps Labor is burnt from its previous attempts to shake up the way Australia gathers revenue – attempts that finished off two prime ministers and ultimately helped send the party into opposition wilderness for nearly a decade. Broken promises are anathema in politics, and Opposition Leader Peter Dutton would be sure to use it to his advantage.

But as Bernie Fraser said last week, the mood might have changed just enough to allow the government some scope for tax reform, thanks in part to the entry of a large number of independents and minor party politicians following the May election.

“There is a greater acceptance of the need for governments to be involved, and for the taxpayers to put up more to achieve these kinds of improvements,” he said.

The states could give Labor an excuse to look at tax reform. With NSW plans to move away from stamp duty, there’s room for talks about raising revenue to replace the loss of lucrative stamp duty payments, and to encourage other states to take that leap.

The government is early into its term, but if it wants to pay for its promises it will have to address the r-word sooner or later.

Ross Gittins is on leave.