Dozens of health and medical research projects received millions in funding through grants in the last financial year, despite not going through a competitive process. 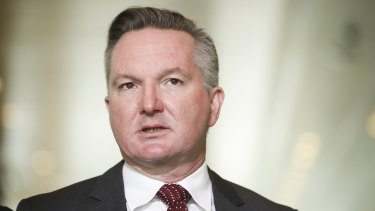 In a speech at the Association of Australian Medical Research Institutes President's breakfast speech on Thursday morning, Mr Bowen will say that far from criticising the good work being funded by the MRFF he believes the system needs to be strengthened.

"We simply don't know enough about what MRFF rounds are coming up, or what grants are awarded, or why," he says in extracts from his speech.

"And that lack of transparency is undermining confidence in the MRFF and distorting its processes even further."

It was revealed in October in Senate estimates that as at January 31 this year, 29 MRFF grants, or 13 per cent, were given without a competitive process. Those grants however accounted for 41 per cent of the total funding, with a combined total of $232.7 million.

When looking at grants with payments made in the last financial year, 9 per cent (38) were not competitive, and they made up 19 per cent ($69.9 million) of the total funding.

Mr Bowen said he did not think that passed the "test of good governance".

"To put it another way, for every $5 the MRFF invests, $2 is awarded without a competitive process," he said.

"Now, it's true that those figures have improved in the past year – but we've got a ways to go."

The Medical Research Future Fund is a long-term investment program to support Australian medical and health research. In the 2019-2020 budget the government revealed a $5 billion, 10-year investment into the funding.

The plan said MRFF activities were based on areas of "national priority" identified by an expert advisory board and with widespread consultation.

So far this year, the government has invested more than $96 million from the fund into COVID-19 research including into vaccine programs.

"Research plays a critical role in ensuring Australia maintains its world-class health system and is particularly important as the world responds to COVID-19," he said at the time.

Mr Bowen said he supported funding for quality research, but this was not the way health and medical research funding should be allocated.

He also said the National Health and Medical Research Council, a separate funding body, needed more funds, as it has to reject 90 per cent of grant applications.