Australia’s industrial laws could be reformed this week, but one worker’s name keeps coming up

Spend any time talking to the Senator about the government’s industrial relations overhaul, which One Nation’s two Senate votes are key to approving or rejecting this week, and you’ll hear Turner’s name. 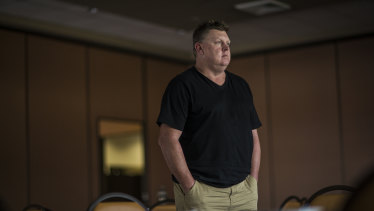 Simon Turner is the lead plaintiff in a claim by class action firm Adero Law.Credit:Meredith O’Shea

Hansard searches show Roberts has raised Turner’s case no less than a dozen times in Parliament over the last 18 months. But Turner is not a union boss or business titan. He is a former worker at BHP’s massive Mt Arthur coal mine in the NSW Hunter Valley who was put out of a job after being injured in 2015.

Since 2018 he has been the lead plaintiff in a class action alleging BHP and divisions of labour hire giants Chandler Macleod and Programmed, which provided workers to the mine, misclassified permanent staff as casuals, costing them millions in benefits like paid leave. Using labour hire firms is common in the mining industry to save costs and have a flexible workforce.

Turner claims agreements that the northern district of the mining and energy union signed are also at fault. He says union officials signed off on pay agreements, which left the workers worse off than the fallback industry award that does not permit casual employment. The narrative is disputed by the CFMMEU and the companies in different ways, but it suits One Nation, which has been critical of both unions and big business. 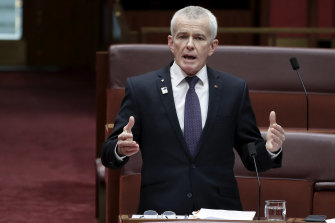 “Chandler Macleod is rigorously defending the proceedings,” Acheson said, noting the Fair Work Commission approved the enterprise agreement, which had been negotiated with the CFMEU. “It is Chandler Macleod’s position that we have, and always will, pay our employees fairly and in accordance with the relevant industrial instruments.”

The mining and energy division of the CFMMEU has long campaigned against the use of labour hire and casual employment to put miners onto pay rates below the industry norm but said it had also negotiated for its members to get the best deal they could in the time being. It said the Chandler Macleod workers at Mt Arthur had voted up their pay deal, which reversed a set of previous wage cuts.

But Turner’s stoush is not good news for the government, either. 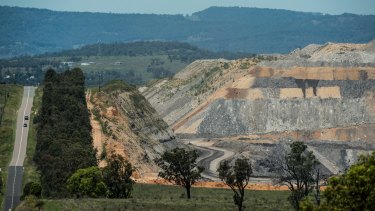 The massive Mt Arthur mine where Simon Turner worked.Credit:Wolter Peeters

This week it hopes to pass an overhaul of Australia’s industrial laws through Parliament. It would make it much harder for workers like Turner who say they have been misclassified as casuals to bring big lawsuits. The purpose is to stop employees “double dipping” by taking a casual loading and then also claiming leave payments, which government modelling suggests could cost businesses tens of billions if applied across the economy.

It fears corner stores and frock shops employing a casual on weekend afternoons will otherwise be at risk of backpay claims if the High Court, which is considering just who counts as a casual and what the payment rules are, rules against employers.

The government’s industrial bill also comes with a pathway for casuals who work regular shifts for six months to convert to permanent work if they want to, albeit with exceptions where it would not work for the business, backed by civil penalties if employers do not comply.

Turner argues the “double dipping” argument does not stack up because he was paid thousands of dollars a year less than permanent staff employed directly by BHP, which declined to comment, who were working alongside him and his colleagues. Those BHP staff were covered by a different enterprise agreement.

“I was in the same crew sitting next to a bloke with a BHP shirt on, I was exposed to the same risks, got tired on night shift [the same], except they sack us when they want to sack us,” Turner said.

He wants the backpay change gone from the bill and no changes to the definition of casual work. Roberts says he does not want businesses to generally be hit by “double dipping” claims but distinguishes that from cases like Turner’s.

One Nation will reveal its amendments to the bill on Monday, and ahead of that employers are ratcheting up their campaign, with 10 groups including representatives of farmers, retailers, restaurants, builders and miners issuing a rare joint statement urging the crossbench to support the government.

Noting unemployment remains high and economic growth low, chief executives of groups including the Business Council of Australia and Australian Industry Group say the bill will make it easier for businesses to hire staff.

“A failure to vote on the bill will increase uncertainty and stifle business confidence at the
worst possible time – just before the JobKeeper scheme ends and as businesses are
making critically important decisions on whether to retain staff,” the statement reads. 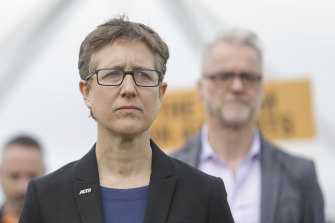 ACTU secretary Sally McManus will be in Canberra this week, lobbying to try to stop the government’s industrial laws.Credit:Alex Ellinghausen

ACTU secretary Sally McManus hit back, saying the employers were trying to advance their own self-interest at workers’ expense. The crossbench, she said, had a choice.

“If they vote for this bill in full knowledge of the damage it will do to permanently suppress wages and make jobs more insecure, they will show they are not on the side of working people and I doubt this will be forgotten,” McManus said.

Anxiety is increasing for those in the government and unions because the three other Senate crossbenchers, Rex Patrick, Jacqui Lambie and Stirling Griff, are largely waiting to see what deals the government strikes with One Nation before fully engaging themselves, though each have raised concerns.

With Labor and the Greens set against the bill, its fate is in the crossbenchers’ hands. And One Nation have proven mercurial on industrial relations in the past.

The party told the government it would support its 2019 Ensuring Integrity bill, which would’ve allowed militant unions to be deregistered, but backflipped at the last minute, insisting it had made no such promises.

Furious government figures made their displeasure known in the press at the time. Minister for Industrial Relations Christian Porter said he was baffled by One Nation’s decision to propose amendments, which the government agreed to, before later voting down the whole bill.

“I’ve actually not seen anything like it,” Porter said, long before he went on leave from his portfolios in early March after vigorously denying rape allegations. “It is exceedingly strange.”

Whether this week sees a repeat is anyone’s guess.