A 22-year-old Vietnamese-Australian has become the youngest person to be elected mayor of an Australian council after councillors voted him into the top position at the inner-west council of Maribyrnong earlier this month. 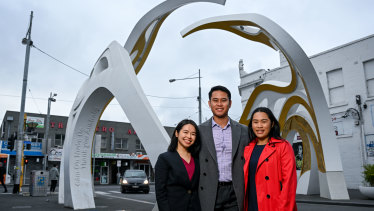 Cr Anthony Tran, a commerce and law student at La Trobe University, said young people of diverse backgrounds didn’t often see people like themselves in positions of power, and he hoped his success “breaking the bamboo ceiling” would help inspire others.

“When you see someone who looks like you, or who represents you in some way, whether it be your age, ethnicity or your background, your morals, [you] feel encouraged to think [I] can also be that some day,” he said.

Cr Tran, who made his acceptance speech in both Vietnamese and English, was groomed for the position at a program set up to support young Vietnamese-Australians into leadership positions in Victoria.

The program has had plenty of recent wins in local government. Alumna Jasmine Nguyen, 24, broke another record, becoming the youngest mayor of Brimbank Council, in the city’s outer west, last week. She was also the council’s first Vietnamese-Australian mayor.

Yarra councillor Claudia Nguyen, 28, was in the running for mayoral robes at the Greens-led inner-north, but missed out to Greens councillor Sophie Wade in a fourth vote on Thursday night, which finally ended the stalemate.

The three councillors, who all ran as independents in the 2020 council elections, have parents or grandparents who fled war-torn Vietnam as refugees.

It’s not lost on Jasmine Nguyen that her parents, who met on a boat to Australia, left Vietnam because they couldn’t see a future in an undemocratic country, and now she had been democratically elected in their chosen home.

“There’s a strong sense of responsibility,” said Cr Nguyen. “They didn’t have the privilege of dreaming big or taking risks, but its thanks to them that I’m lucky enough to have that privilege.”

Cr Nguyen’s deputy mayor is also a Vietnamese-Australian. The new mayor said she hoped to increase employment, create a mental health hub and help Brimbank recover from the impacts of the pandemic.

The program, which has about 30 participants each year, is now run by its alumni, which includes former Greens MLC Huong Truong and Celia Tran, who was named on the top 50 public sector women list. They have been approached by leaders of other ethnic community groups for advice on how they too can support their young people.

Cr Claudia Nguyen agreed that seeing people like her in prominent positions was inspiring.

“I’m a woman, I’m queer, and rarely do I walk into a room and feel like I belong,” she said.

“If I can just pave a pathway for anyone who identifies with me, to let them see that it is possible … that would be an achievement.“

Vivienne Nguyen said the program was designed to instil pride in Vietnamese culture, while teaching participants how to access Australian networks.

“People from different cultural backgrounds don’t have the [same] opportunities,” she said.

“We weren’t born here. Our parents didn’t know lawyers. We’re not part of the network in Victoria, particularly in Melbourne, it’s very relationship-based.”

Cr Tran, who says he is a progressive politician aspiring to roles in higher levels of government, said the major parties should be doing more to back diverse communities.

As mayor, he has promised to advocate for a headspace centre to support youth mental health in Maribyrnong.

“He’s an intelligent young man, he’s articulate, he’s a great thinker [and] he’s prepared to listen and then, not just act, consider and reflect,” he said.

Cr Tran was two weeks younger than the previous youngest mayor, David Eden, who was elected to lead Kingston Council in 2016 at the age of 22.

Emilia Lisa Sterjova made headlines in 2019 when she elected mayor of Whittlesea on the eve of her 23rd birthday.

Federal Labor MP Clare O’Neil was 23 when she became mayor of Greater Dandenong in 2004, holding the title of the country’s youngest mayor for several years.

Vivienne Nguyen, Claudia Nguyen and Jasmine Nguyen are not related.