Part-timers in food and retail jobs will lose overtime payments when they take on extra hours as part of a government plan that will also criminalise wage theft but shield small businesses that get bad employment advice.

The new "part-time flexi" role to be announced on Tuesday creates a new category of employment for tens of thousands of businesses in the food, accommodation and retail sectors as part of an industrial relations overhaul that aims to fight unemployment and increase job security to be put to Parliament this week. 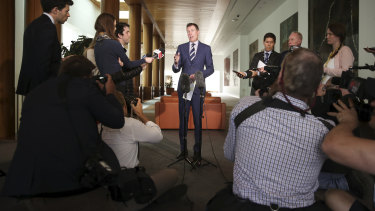 The most serious cases of wage theft, such as the scandals revealed at 7-Eleven franchisees in 2015, will trigger criminal penalties of up to four years in jail and $5.5 million fines as the government cracks down on underpayment to help honest businesses.

Unions welcomed the government’s move to raise penalties for underpayment but the new perma-flexi category got a cautious response from the Australian Council of Trade Unions, which said it would oppose anything that took workers backwards.

Attorney-General Christian Porter will also announce a free pay advice service for small businesses on Tuesday, with firms to be shielded from prosecution if the advice turns out to be wrong, to help employers take on staff without fear of underpayment claims.

Mr Porter said the new criminal offence was intended to capture the worst cases of dishonest and systematic underpayment, not accidental errors by businesses baffled by complex pay rules.

But Mr Porter plans to outsource some of the most contentious parts of his industrial agenda to the Fair Work Commission, which will be asked to simplify pay rules in conjunction with unions and business.

Five people on both sides of the industrial divide, who were not authorised to speak on the record, said Mr Porter would soon write to the commission to ask it to create simpler loaded rates that bundle up penalty rates and other allowances in the restaurant, clubs, hospitality and retail industries.

There will also be a bid to slash the number of pay classifications in the awards, which can number in the dozens, to try to prevent accidental underpayment by confused employers, the sources said.

The commission will only have until the end of March, when the JobKeeper wage subsidy expires, to craft the changes. That sets up an intense period of jockeying by businesses and unions over how high or low the new rates should be, with potentially millions of workers’ pay and businesses’ profitability on the line.

It comes after months of talks this year on industrial reforms, which identified problem areas such as underpayment but failed to produce consensus on solutions.

Companies from Woolworths to big law firms and high end restaurants have been caught underpaying staff in some cases up to hundreds of millions of dollars.

Under the new bill, negligent underpayment will attract higher penalties and low level courts will be able to handle claims of up to $50,000 to help workers get money back faster. Big businesses caught underpaying their workers will be up for fines equalling three times the benefit gained from dudding their staff.

The government’s plan allows part-timers in accommodation, food and retail to take on extra shifts above their regular roster and a threshold of 16 hours a week without overtime. It estimates it will help the almost 30 per cent of retail and 37 per cent of hospitality workers who want more hours.

The Australian Chamber of Commerce and Industry lashed the criminal underpayment rules.

"Criminalising underpayments risks tipping the scale against anyone who wants to do business or employ anyone in this country," ACCI chief executive James Pearson said.

Both Mr Pearson and Innes Willox, chief executive of the 60,000 member Australian Industry Group, said there needed to be greater simplicity in workplace laws if the government was to penalise contravening them more heavily.

Australian Council of Trade Unions secretary Sally McManus welcomed the plans but said the bar for criminal prosecution had been set too high. "It is unlikely any employer will ever be caught," Ms McManus said.