You know that sinking feeling when you excitedly show your friend a viral video, but they don’t think it’s funny? Imagine the video is three hours long and it’s a movie and your friend is your boyfriend and he does think it’s funny, but you actually wanted him to cry because it’s the most romantic thing you’d ever seen in your life. That, along with many other underwhelming reactions, has been my experience when recommending one of my favourite movies, Meet Joe Black.

I gushed about it on my podcast and the one message I got from a listener said, “Concetta! The tea is that following your recommendation on the pod, I forced my boo thang to watch Meet Joe Black with me and it was the absolute WORST! Now he thinks I have terrible taste in movies.” I got back in touch with this listener who informed me they had since broken up. I asked her if it was my fault and she said no, but it felt like she meant yes. 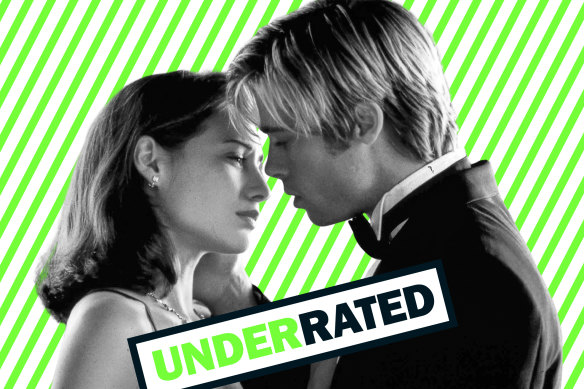 Originally released in 1998, Meet Joe Black is a romantic fantasy film starring Brad Pitt as Death in human form, Anthony Hopkins and Claire Forlani. Directed by Martin Brest (Scent of a Woman, Gigli) and loosely based on the 1934 film Death Takes a Holiday, it was almost an award-winning movie when it came out: in 1998, it earned a Razzie nomination for worst remake, but was beat in a three-way tie by The Avengers, Godzilla and Psycho. It should have won! I mean, lost! I don’t know, show business is wild.

Growing up, my dad was the movie guy, so I was raised watching titles from his extensive collection of DVDs. If Dad had bought it on DVD, that meant it had artistic merit – it was his seal of approval, like an Oprah’s Book Club sticker. I watched Meet Joe Black when I was a teenager, and it blew me away. I am a girl with too many emotions and this movie allowed me to feel them all. It had love, sacrifice, chemistry, devotion, betrayal, family and, of course, a meet-cute.

When people think of iconic meet-cute scenes, the same answers come up: Noah climbing the Ferris wheel in The Notebook; the elevator scene in 500 Days of Summer; JLo deciding to marry Owen Wilson, who’s holding a “marry me” sign at a concert, in Marry Me. To my dismay, what you never hear is the coffee shop scene from Meet Joe Black.

In it, the two main characters get to talking in the dreamiest cafe. It’s the kind of place you’d have no choice but to fall in love in: teak wood, big windows, soft lighting, hot as sin coffee and retro as hell decor. Everyone always throws around “the chemistry is electric” (like I do when describing the McDonald’s server taking my super particular Oreo McFlurry order), but in this scene, it’s a fact.

I rewatched the scene on YouTube and when Pitt’s character mentions he’s “a one girl guy” to the stunning Forlani (Italian, like me = important), I hit the arm of my boyfriend and asked why didn’t he say that? Instead, our meet-cute involved my boyfriend (the host of the open mic on level two of the Newtown Hotel) asking me (the host of Quiz Meisters trivia on level one of the Newtown Hotel) if I could please turn my music down because they can’t hear the comedy.

Speaking of music, the soundtrack to Meet Joe Black is one of the greatest of all time by the GOAT himself: Thomas Newman. He’s the guy who did the music for The Shawshank Redemption, people! (plus, American Beauty, Revolutionary Road, Little Women, Finding Nemo, yadda yadda yadda). We’re talking about the kind of music you play on your AirPods when you want to make your life feel more profound than it is. If your barista calls your name while Whisper of a Thrill is playing, your barista is definitely in love with you. If The Next Place is playing when my boyfriend gets home, I embrace him as if he’s returned from a long war instead of a 45-minute boxing class in Bondi.

Meet Joe Black was uniformly panned by haters (ie: critics) when it was released. “Clocking in at a self-important two hours and 59 minutes, this elongated romantic fable is impossible to sustain at a running time better suited to the fall of the Roman Empire,” wrote The Los Angeles Times. Newsweek said, “Every once in a while a film comes along that’s so inexplicably ghastly that there’s just no point in making nice about it.” How rude!

A mean man (my boyfriend) said the premise is confusing. What’s so confusing about Death deciding to take the form of a young man and asking a media mogul with a beautiful family to teach him about life on Earth, and in the process, he falls in love with the mogul’s daughter and wants to know what porking her feels like? To me, that is much more logical than whatever the hell is happening in, say, Lord of the Rings. I’d much rather watch the girl who made DEATH fall in love with her than, what is it, some hairy little hobbits run around looking for a ring?

Look, Meet Joe Black may not be perfect, but it’s definitely better than everyone says it is. You can take my word for it, but nothing will come close to sitting down and experiencing it for yourself. Just strap in for the three-hour run time and some super cringe scenes of Brad Pitt speaking in Jamaican Patois.

Concetta Caristo is a comedian and improviser. She’ll be performing at Celebrity Theatresports at Enmore Theatre on August 21.