A bride-to-be who was diagnosed with breast cancer after spending months organising her perfect £12,000 Caribbean wedding has revealed how she had to reschedule her big day to have radiotherapy instead.

Chloe Bailey, 34, of Norwich, Norfolk, spotted a pea-sized lump under her left armpit in November 2017, before being told she had stage two breast cancer and needed a lumpectomy to remove it.

When scans showed the cancer had spread to her lymph nodes, a devastated Chloe was told the month-long course of radiotherapy she needed plus surgery would clash with her wedding day on May 18, 2018.

Chloe had been planning her big day ever since her partner Harrison Bailey, 32, proposed on April 16, 2017. The plumber, who she met on a night out, popped the question during a weekend trip to London for their 10th anniversary.

But luckily, the couple’s travel agent rescheduled their big day for exactly the same date and the same place, just a year later.

‘Having radiotherapy when I should have been saying, “I do”, wasn’t the best feeling in the world, but having a goal of walking down the aisle the following year really powered me through it all,’ said Chloe. 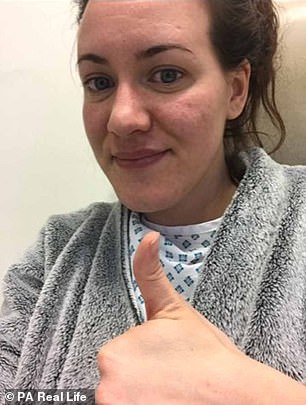 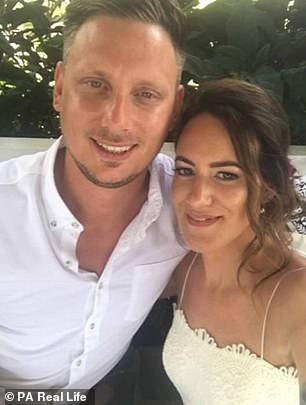 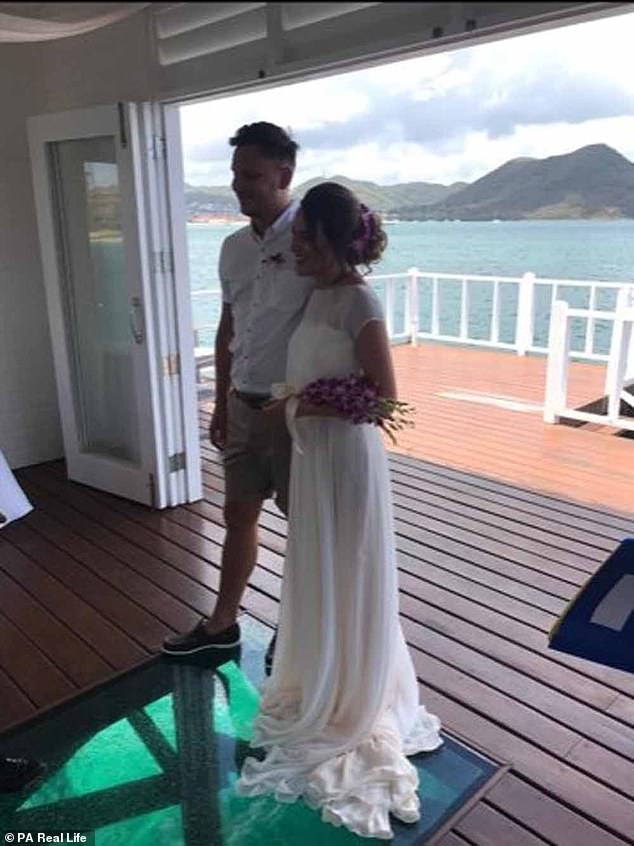 Chloe and Harrison during their rescheduled wedding. The couple’s travel agent reorganised their big day for exactly the same date and the same place, just a year later

‘We did lose about £2,000 on the honeymoon we’d planned to Machu Pichu, Peru, in South America, but in the grand scheme of things we did all right.’

And it wasn’t just the wedding fund that came through unscathed, as following two three-month check-ups, Chloe was given the all clear in March 2019.

But when first told her treatment schedule, the confectionery packaging designer said she thought: ‘Will I still be able to walk down the aisle? [Yet] I knew I couldn’t sacrifice my health for my big day.

‘What’s the point of getting married if you know from the get go it’s not going to end happily ever after?’

In November 2017, Chloe noticed a lump under her armpit while in the shower and decided to get it checked out. 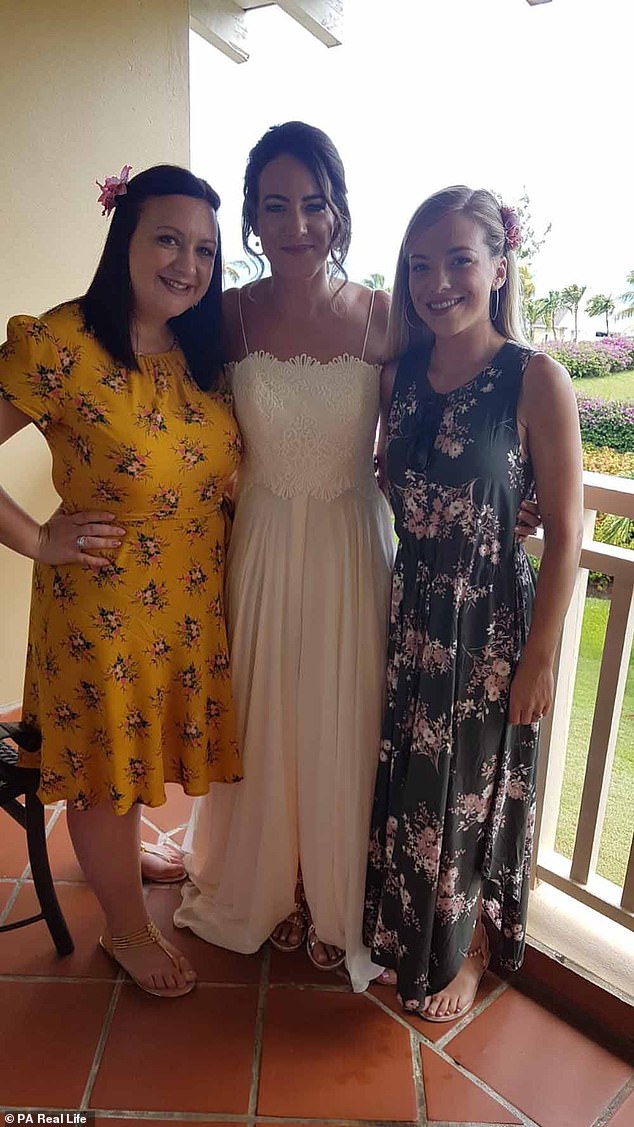 Chloe pictured with her bridesmaids. She was forced to cancel her first wedding and reorganise the £12,000 big day

She was eventually referred for an ultrasound at Norfolk and Norwich University Hospital, where doctors took a biopsy after discovering a sinister looking mass under her arm.

Recalling the day she received her results, Chloe said: ‘It was the first week of the new year and as soon as I sat down in the consultant’s room I could tell from the doctor’s face that it wasn’t going to be good news.’

Despite being diagnosed with stage two breast cancer, doctors were optimistic due to Chloe’s age and the fact the cancer was localised, that she would make a full recovery.

On February 28 2018, still hopeful she would make her wedding in less than four months time, she had the cancerous mass and six lymph nodes removed at the same hospital.

‘The cancer had been taken out, and I couldn’t help but think that my dream wedding in the sun might still be a reality,’ she added. 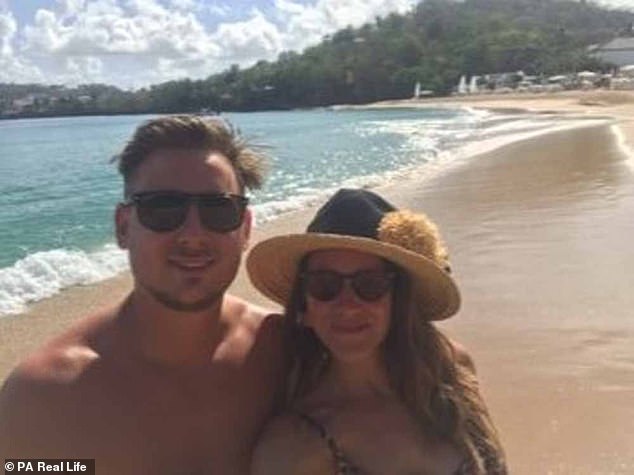 Opting for a more relaxed honeymoon after her difficult year, Chloe and her husband decided to island hop to Barbados for a ‘chilled two weeks’ (pictured) 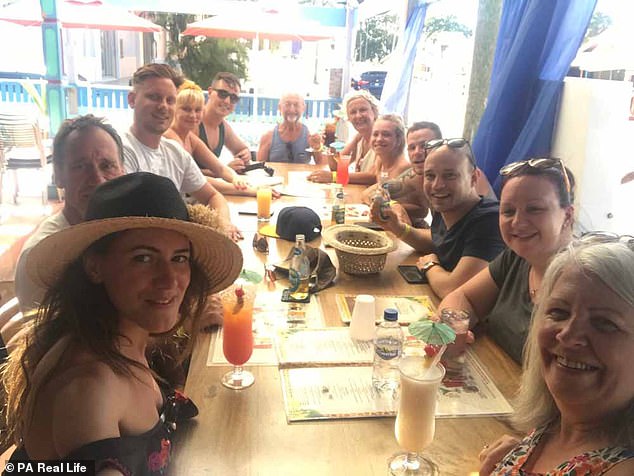 But after performing tests on the mass and lymph nodes, doctors dealt the devastating blow that Chloe would need radiotherapy throughout May, as a preventative matter to ensure the cancerous cells did not return.

‘I asked the doctors if there was any way of pulling the radiotherapy forward a month, so I could fly out in time for the wedding, but they told me it would not be sensible to expose myself to so much heat that soon after the treatment,’ she said.

‘I was absolutely gutted but I knew I couldn’t sacrifice my health for my dream wedding.’

Supported by friends and family, Chloe had 20 minute treatments daily from Monday to Friday for four weeks throughout May 2018.

‘When my planned wedding day arrived, instead of walking down the aisle I was walking into radiotherapy at Norfolk and Norwich University Hospital,’ she said. 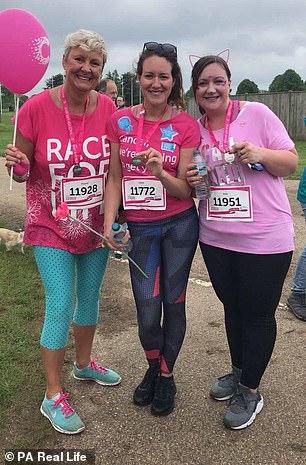 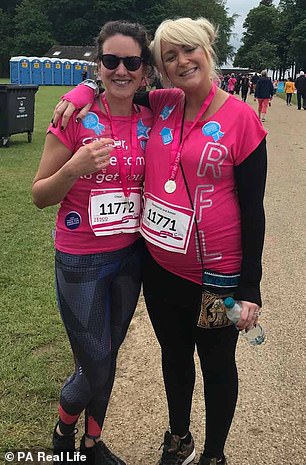 Chloe taking part in race for life with friends. Now back in the UK, Chloe has settled into married life

Thankfully, after getting the all clear in March 2019, Chloe’s dream wedding at the Sandals Grande St Lucian Luxury Resort was reorganised.

‘It felt for a long time like our wedding would never happen and then suddenly I was under the Caribbean sun saying, ‘I do.’

‘In the back of my mind there was a niggling fear that, after the six-month check-up, something was going to go wrong – but thankfully it didn’t,’ she said.

Opting for a more relaxed honeymoon after her difficult year, Chloe and her husband decided to island hop to Barbados for a ‘chilled two weeks’.

Now back in the UK, Chloe has settled into married life, but she still feels the impact of her breast cancer treatment after being put on Tamoxifen – a hormone therapy that helps stop the disease returning – for two years. 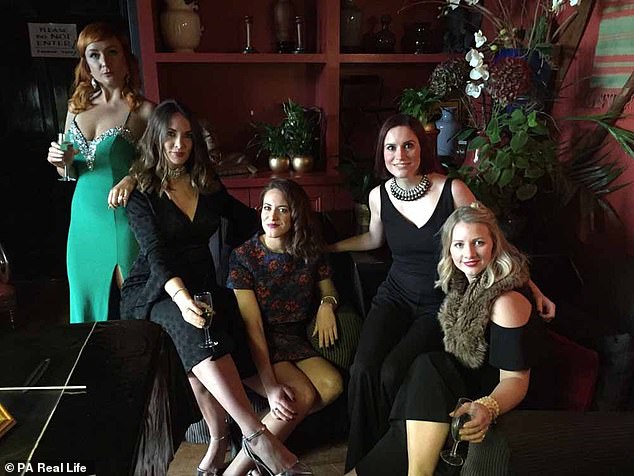 Supported by friends and family (pictured with Chloe), Chloe had 20 minute treatments daily from Monday to Friday for four weeks throughout May 2018

‘When Harrison popped the question I was determined to get married and fall pregnant within a year. But the hormone therapy I’m on means I can’t fall pregnant until I come off the meds, as the drugs can damage the baby,’ she explained.

‘Doctors warned that the Tamoxifen could put me through early menopause, so they fertilised six of my eggs with Harrison’s sperm and put the embryos on ice as a back-up plan.

‘After five years, we’ll have to start paying for their storage but I’m not too worried – the chances of me going into early menopause are pretty low.

‘I’ve learnt from this experience that you have to take what life throws at you. And, after beating cancer, I’m now very happy to settle back for a while and just enjoy being married.’

Cancer Research UK was a key player in the development of radiotherapy, which now benefits more than 130,000 patients every year in the UK