Bride postponed her wedding after she was left with 'hotdog lips'

Beauty fan, 40, reveals she was left with ‘hotdog lips’ after beautician ‘massively’ over plumped them with filler – and spent months trying to find someone to dissolve them before her wedding

A woman told how she was left with ‘hot dog lips’ after a beautician over plumped her lips with filler.

Emma Griffin, from Tuxford, Nottinghamshire, found an aesthetics practitioner, who said she was medically trained, to top her lip filler up in February 2019 after moving to a different area.

Emma, 40, claims the practitioner ‘massively overfilled’ them, leaving her with ‘massive hotdog lips’ that left her hiding behind a face mask for a year while desperately trying to find someone to dissolve them.

The beauty salon owner even says her engagement was overshadowed by her super-sized pout because she didn’t want her photo taken. 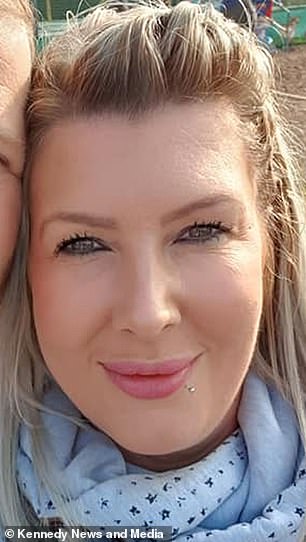 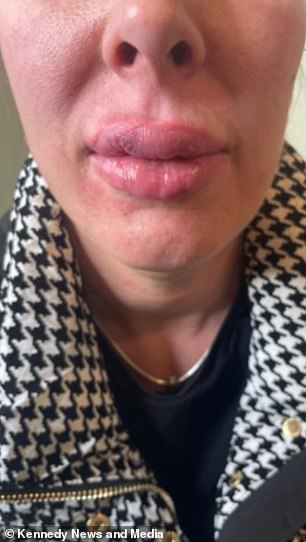 Emma Griffin, from Tuxford, Nottinghamshire, found an aesthetics practitioner, who said she was medically trained, to top her lip filler up in February 2019 after moving to a different area. Pictured, before her botched filler (left) and after (right) 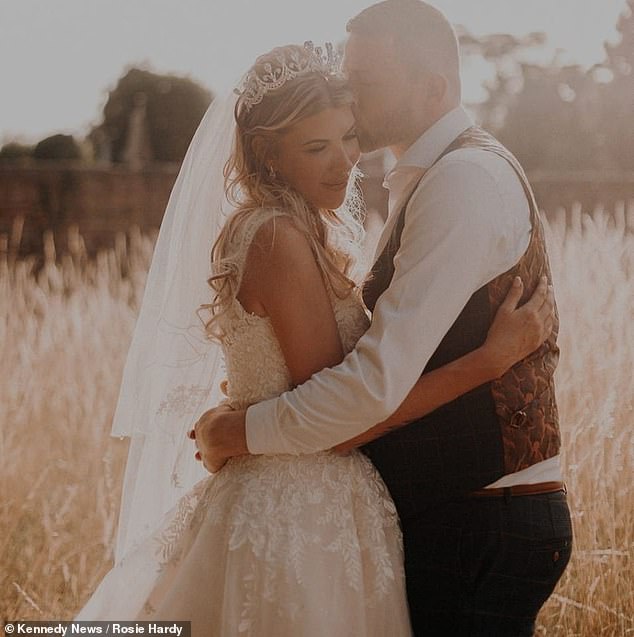 The beauty salon owner even says her engagement was overshadowed by her super-sized pout because she didn’t want her photo taken. Pictured, on her wedding day after she had her lip filler dissolved

Emma had previously had her lips done with a different practitioner with no issues.

But after moving into a new area she says she was forced to find a new injector, which led to her disastrous experience.

Since training in aesthetics herself, Emma says she realises the practitioner did not follow proper ‘protocols’ when injecting, causing the botched result.

Emma said: ‘She was a medic so in my mind – because I wasn’t qualified at that point – I was totally confident she knew what she was doing.’ 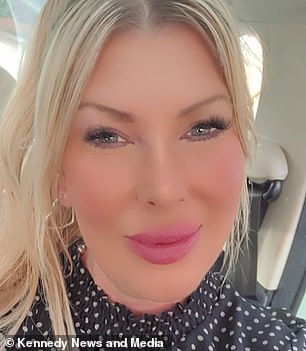 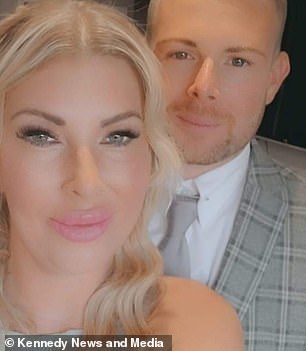 The 40-year-old is now warning anyone considering fillers and injectables to ‘do their homework’ after her ‘awful’ experience (pictured left before getting her botched filler). Right, when her lips were still overly plumped 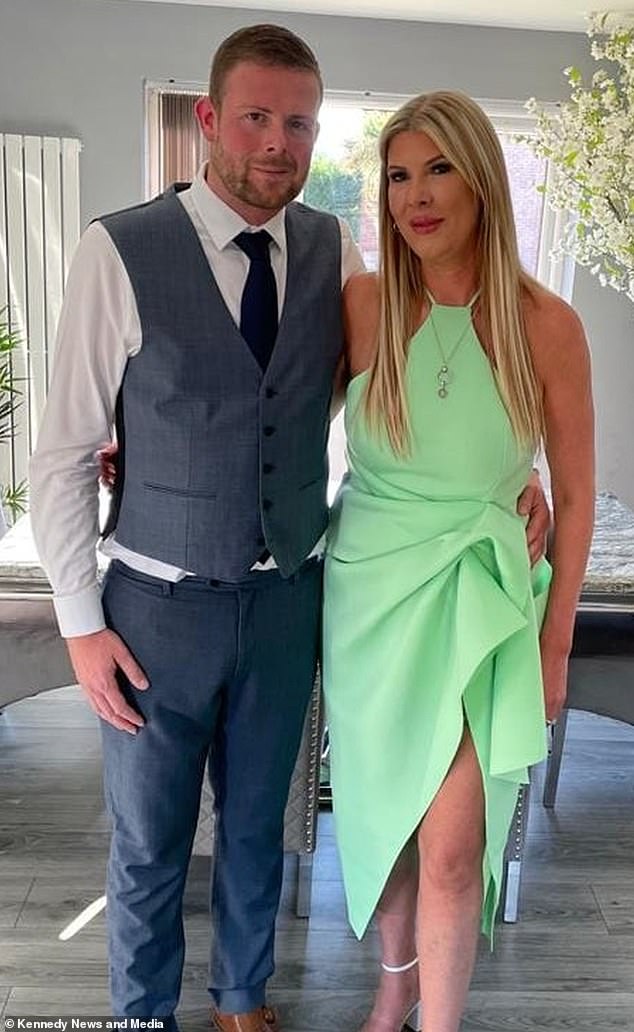 Emma, pictured after getting her botched lips fixed, said when her husband asked her to marry him the first thing she said was  she ‘couldn’t have her lips looking like this’ 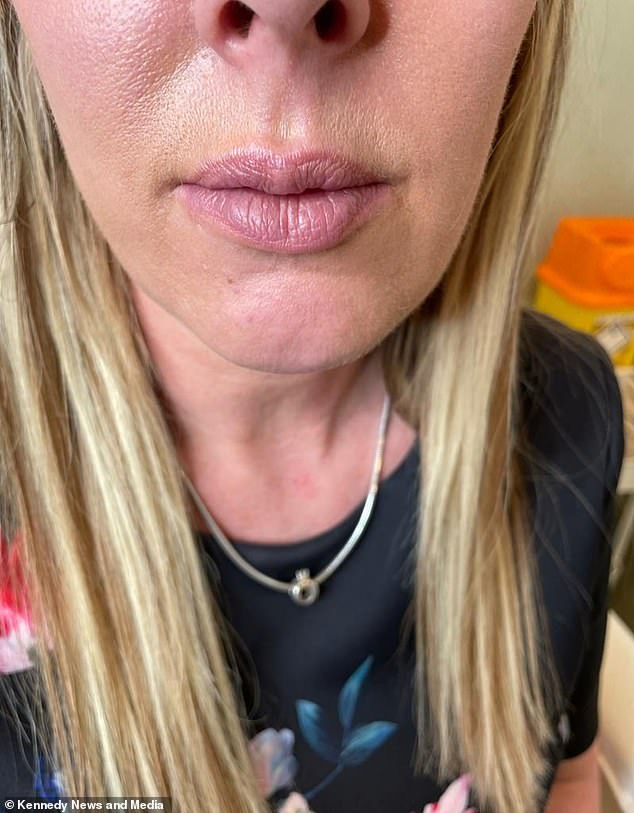 Emma said: ‘My lips had swelled like two massive hot dog sausages and I was like ‘oh my god’. She said “the swelling will go down” but it never really went down. It was awful.

‘She’d actually injected into my water line and filler loves water so it just keeps feeding and feeding.

‘I ended up with a lump just a bit bigger than a grain of rice underneath my lips – it looked like I’d had a stroke on one side.

‘It was like a snarl. I smiled and you couldn’t see my tooth on one side because there was just this lump there.’

‘I thought “well it will disappear because filler breaks down over time. I normally have them done every 9-12 months so in nine months they’ll be fine”. 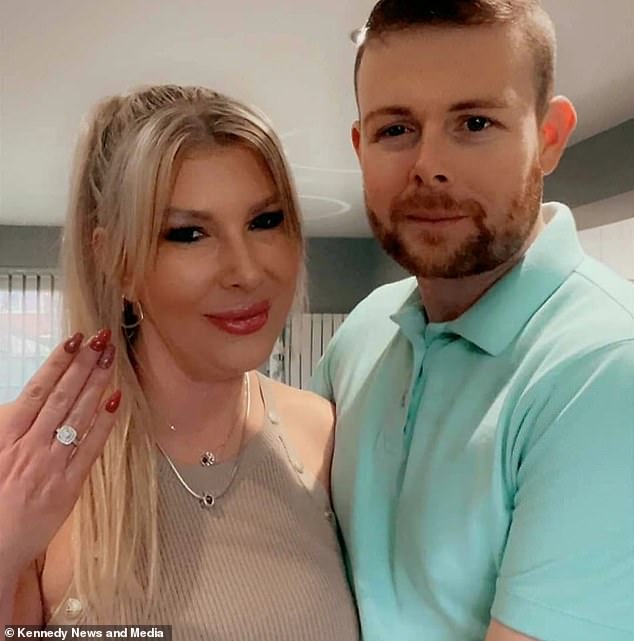 ‘We were in lockdown at that point anyway, I was quite lucky because we had to wear face coverings then so I kind of hid behind a face mask for a year.

‘As I started to train I realised the lump in my water line was never actually going to go and that’s when I started to freak out a little bit.

‘Everyone I was approaching to dissolve them kept saying ‘you need to go back to the original practitioner’ but I didn’t trust her to go anywhere near my face again.’

She added: ‘I didn’t have any definition in my lips – all I wanted was a cupid’s bow and a bit more volume but it was just straight across the top.

‘You could stick a pencil on my top lip and it would stay there. Everything aesthetically about them was so wrong, it had a massive effect on my confidence and my life.’

Her lips were still overfilled when Emma’s future husband Owen popped the question in December 2020. The first thing she said was she ‘can’t have any photos’ because she was self-conscious of her lips.

She continued: ‘We didn’t plan the wedding until I’d managed to get someone to dissolve and redo my lips because I couldn’t bear the thought of my lips looking like that on my wedding day.

‘I didn’t even want to look in the mirror or smile. Every morning I would wake up and it would just be these things stuck on my face.

‘Every photo I took I had to filter it and that never used to be me because you are who you are but I became massively conscious.’ 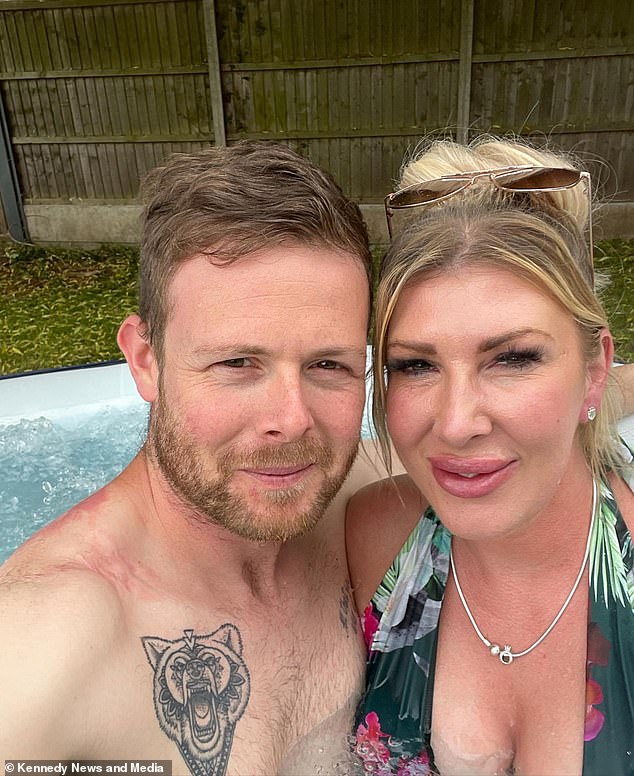 After a year of hating her lips, hiding behind a facemask and being turned away from every practitioner she begged to fix her pout, Emma finally found someone willing to take it on. Pictured, before getting her botched lip filler fixed

After a year of hating her lips, hiding behind a facemask and being turned away from every practitioner she begged to fix her pout, Emma finally found someone willing to take it on.

She met a fellow aesthetics practitioner at an advanced training course who dissolved her lips in February this year before refilling and reshaping them the following month.

Emma claims it took three millilitres of a dissolving agent to fully break down her ‘overfilled’ lips over the course of 36 hours.

She was then finally confident enough to move forward with wedding planning and got married to her husband Owen Griffin, 37, in July.

Emma in December 2018 with Owen, before her botched filler. The practitioner said she has to combined filler top-ups and tattooing in order to maintain her lips since the procedure

The aesthetics practitioner says she is now forced to get her filler and tattooing topped up yearly to maintain her ‘over-stretched’ lips.

Emma said: ‘She said ‘it’s the worst dissolve I’ve ever had to do, the amount of [dissolving agent] I had to use is shocking’ because they weren’t going down.

‘I’m over the moon with how they look now, I don’t think I look bad for 40. I got married, I can smile, I can look in the mirror – I just feel like myself again.

‘I’ve had them refilled and then I’ve had to have them tattooed as well because they were so overfilled I lost all the pigment in my top lip so it had white patches on.’

‘You can lose a little bit of pigment with lip filler because the skin is stretching but when they’re massively overfilled like that it’s a direct result of the skin being stretched far too much.

‘The reality is I’ve got to keep having them done now because my skin is stretched – when I got them dissolved they were just like saggy and limp and that will never go back.

‘If I don’t put filler in to give them some sort of structure, they just look deflated.’

The newlywed now hopes to warn others considering getting filler to thoroughly research practitioners before going under the needle to avoid the same ordeal she did.

She also urges people to use aesthetics to ‘enhance’ rather than drastically ‘modify’ their features to avoid causing damage to their skin. 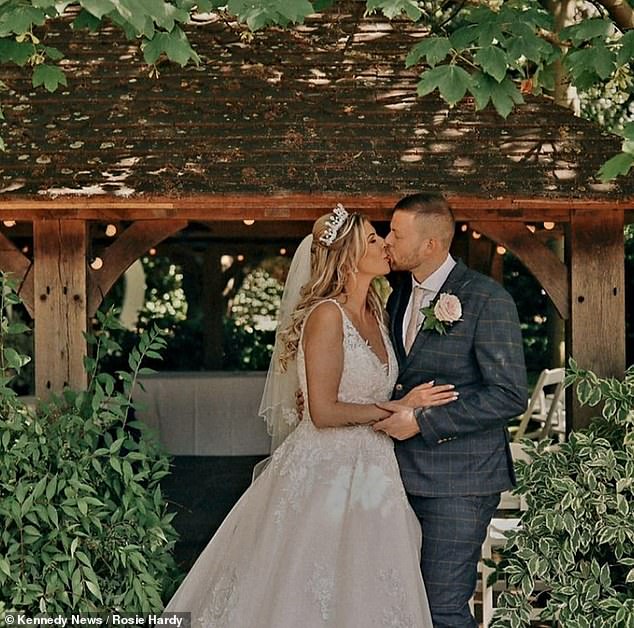 After having her lip filler dissolved, she was finally confident enough to move forward with wedding planning and got married to her husband Owen Griffin, 37, in July 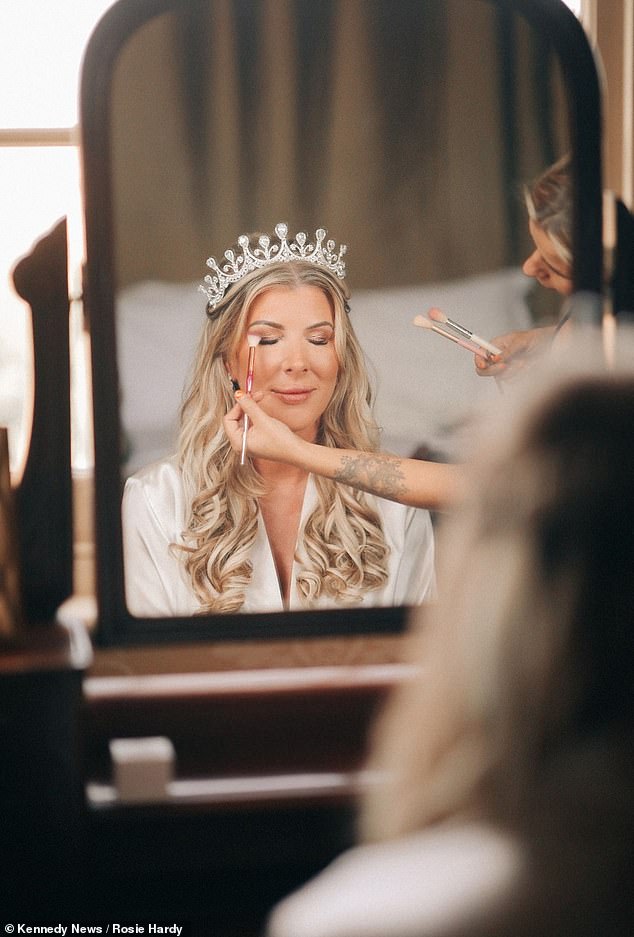 After having the filler dissolved, Emma said she finally felt confident enough to go ahead with her big day

Emma said: ‘I’m an aesthetic practitioner myself and if this can happen to me, just be very careful who you pick when you’re getting stuff stuck in your face.

‘You need to have a free consultation, look at the portfolio, speak to previous clients, check for insurance and Google that practitioner.

‘Do your homework and go steady – you don’t need to have loads of it done, it’s better to build these things up.

‘It should always be within the ‘golden quarter’, so it should be an enhancement not a modification which is what ended up happening to me.’