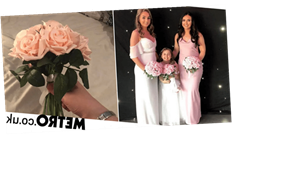 A bride had a beautiful wedding on a budget thanks to some high street dresses and homemade bridal bouquets.

Amanda McBryde, 23, from Scotland, got married on 19 September at Port Glasgow Registry Office to her partner Lee.

The couple decided they wanted to pay for it themselves but that meant a tight budget.

Her mum Ruth McLaughlin paid for the jewellery, the photographer and some tiny touches, while her uncle paid for the couple’s car.

But the pair paid for the rest themselves and had some inventive ways to keep costs down, while still having the perfect day.

They used Vistaprint to create save the date cards and invitations for £35.

The bride bought her dress from online shop Missguided and it was already on sale, down to £30.

Her maid-of-honour was her best friend of 18 years and her pink dress came from Boohoo for £11.

They paid a little more for the dress for her bridesmaid – her eight-year-old sister Cayla. They picked up a dress for £80 from Monsoon.

But one of the biggest cut-price items was the bouquets that Amanda and Ruth created by spending £18 on fresh roses from Home Bargains and wrapping ribbon around the stem, instead of paying hundreds for flowers from a professional florist.

They bought three bunches costing £6 each and Ruth used ribbon she already had at home.

Ruth said: ‘They look lovely. My sister-in-law is a florist and was nicely shocked when she found out where they were from.’

The couple had their reception in Cruden Hall in Greenock and enjoyed celebrating their marriage with close friends and family.

Ruth added: ‘I’m so proud of them. They wanted to do it all themselves and they did in just a few months.

‘They found so many ways to reduce costs and the whole thing was stunning.

‘It was so special to have my youngest daughter Cayla so involved too.

‘The registry office did an ‘extra witness’ form for her to sign. They have such a close bond despite the age gap. It was so special.’

END_OF_DOCUMENT_TOKEN_TO_BE_REPLACED

END_OF_DOCUMENT_TOKEN_TO_BE_REPLACED
We and our partners use cookies on this site to improve our service, perform analytics, personalize advertising, measure advertising performance, and remember website preferences.Ok