A shopping tradition imported from the United States is changing Australia’s retail landscape as consumers pull forward their Christmas spending to bag large bargains and offset the spiralling cost of living.

Local retailers, expecting more than $6 billion to be spent over the next four days, are embracing the Black Friday phenomena with Instagram ads, billboards, email notifications and even text message alerts being used to drive up interest and draw in shoppers. 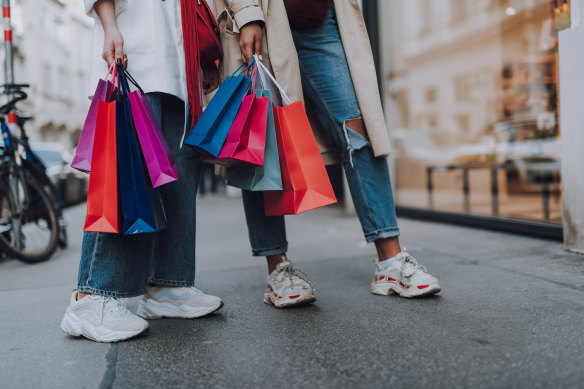 Local retailers are expecting more than $6 billion to be spent in the Black Friday sales later this week.Credit:Istock

Card spending data from the Commonwealth Bank showed a decrease in spending over the first two weeks of November, particularly for clothing, footwear and general retail, and research from the bank shows more than half of their customers plan on spending less at Christmas.

Commonwealth Bank’s general manager for shopping Rochelle Eldridge said high inflation was putting pressure on households, and savings were at the top of people’s minds.

“We are seeing people prioritise essential items, with 7 in 10 shoppers planning to buy essential everyday items or larger items that they need at the sales this weekend,” she said.

Rachel Pool, head of strategy at advertising firm Ogilvy, said brands have been fighting for consumer attention in the lead-up to the Black Friday sales.

“It’s a bumper season for advertising at the moment,” she said.

“It’s becoming more competitive, I think it’s going earlier. And that’s probably only exacerbated by the economic conditions that we’re operating under.”

The Australian Retailers Association estimates shoppers will spend a record $6.2 billion over the four days between Black Friday and Cyber Monday. It estimates that about one-in-five Australians will shop earlier than last year.

Commonwealth Bank’s research found shoppers expect to spend an average of $482.90 at this weekend’s sales.

Association chief executive Paul Zahra said about a third of all Christmas shopping has been done before Black Friday while another 25 per cent will be done through the next four days.

“There’s definitely more retailers advertising than in previous years. Many businesses that had resisted being part of Black Friday have now succumbed to it because that’s what customers want,” he said.

Normally, Black Friday shoppers were heavily focused on gift buying for Christmas, Zahra said, while the traditional Boxing Day sales were used by consumers to get substantial discounts on goods for themselves.

But the Commonwealth Bank survey of customers found 38 per cent would use the Black Friday sales to find Christmas presents, while 71 per cent planned to buy everyday essentials.

Zahra said the cost of living pressures and concerns about supply chain blockages were factors behind the expected increase in the number of people taking part in Black Friday sales.

“People are looking for more for less,” he said.

Black Friday sales, an American tradition that marks the day after Thanksgiving and the start of the Christmas shopping period, are only a recent phenomenon in Australia but have boomed in popularity.

Data from the Australian Bureau of Statistics show that in November 2014, Australians spent $4.4 billion on household goods compared to $5.4 billion the following month.

By November 2019, household goods spending had climbed by 17 per cent while spending in December was up by 12.5 per cent.

There have been similar increases in other discretionary areas. Spending on clothing and footwear jumped by 32 per cent between November 2014 and November 2019 compared to 19.5 per between the Decembers of the two years.

The bureau’s head of retail statistics, Ben Dorber, said the agency first started to see the impact of the Black Friday sales in 2015.

Dorber said as Black Friday had grown in importance, it was affecting the traditional Christmas period sales through December.

“People buying online know that they have to buy a little earlier to make sure they get their goods, so we are seeing a bit of movement from December into November,” he said.