You left Buŋgul feeling both insignificant and elated, having been afforded a glimpse of a culture almost as old as time.

We – that is, most Australians – have spent over 200 years ignoring that culture (when we haven't been trashing it). Perhaps more of us are less ignorant about it than we used to be, but this differed from most chances to engage. This was like being allowed inside. 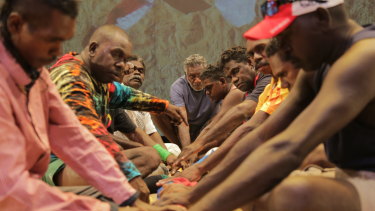 Buŋgul gives a glimpse of a culture almost as old as time.Credit:Paul Shakeshaft

Buŋgul, a term akin to ceremony, was as multifaceted as performance art can be. At its heart lay a live rendering of Gurrumul's posthumously released album, Djarimirri (Child of the Rainbow), which combined traditional songs from the Yolngu people of North East Arnhem Land with orchestral settings by Erkki Veltheim.

Producer Michael Hohnen suggested that Veltheim seek a parallel for the traditional music's use of repetition and the overlapping rhythmic figures of the yidaki (didjeridu), by crafting orchestrations conjuring the minimalism of Philip Glass and Steve Reich.

So here was Veltheim conducting the Sydney Symphony Orchestra, playing in real-time against Gurrumul's vocal tracks from the recording, while the members of Yirritja and Dhuwa provided dance and occasional live music, and a big screen variously showed film, paintings, and live video. This scarily ambitious project was pulled together by directors Don Wininbar Ganambarr and Nigel Jamieson.

It was worth the effort, as mystery piled on mystery. Here was Gurrumul's extraordinary voice fraying the edges of the possible, a cello section replicating the yidaki's phenomenal momentum, and ritualistic dances as ancient as the sand beneath the performers' feet.

On Gapu (Fresh Water) Veltheim's shimmering orchestration was capped by marimba. Gopuru (Tuna Swimming) was not so much a depiction of that fish, as a celebration of it.

The solemn Marrayarr (Flagpole) had Gurrumul keening and roaring, while the dancers enacted a deep reverence for a flagpole. Djapana (Sunset) had the dancers performing a funeral-like ceremony, and on the closing Wulminda (Dark Clouds) Gurrumul's voice seemed to sound a warning cry before the music and dance reached a stillness so profound it was as though time had stopped. And perhaps it had.