(The dumpster company, not the bear)

A California man is suing after a surprise bear inside a dumpster left him with a twisted ankle.

John Donaldson is seeking $15,000 in damages from Incline Crest Condominium Association and Waste Management of Nevada, insisting they are responsible for the injuries he suffered fleeing the trash-sifting predator.

According to his lawsuit, the Davis resident was renting a cottage with his wife on September 5 of 2019; while walking his dog, the dog relieved himself on the pavement, and his owner dutifully scooped up the waste in a baggie and headed for the closed dumpster…. where the shock of his life was waiting inside. 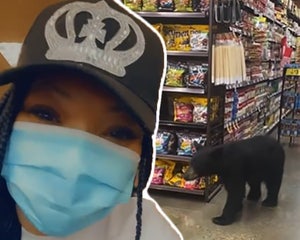 “Because the dumpster did not function properly, [Donaldson] had to fiddle with the defective and malfunctioning latch before opening it,” it claimed. “Once [Donaldson] was able to open the latch, he was immediately confronted by a bear who was in the dumpster.”

Donaldson was so startled by the animal, who he said was advancing towards him, he attempted to flee, but tripped and fell to the ground, twisting his left leg and ankle and landing on his back.

Completely at the carnivore’s mercy, Donaldson luckily survived to tell the tale to his lawyers: “After leaving the dumpster, the bear loitered nearby for several minutes before walking toward the cabin area and disappearing into the forested area behind the development.”

Fight Breaks Out After Woman Helps Dog Locked in Hot Car — But Who is in the Right?

While he managed to avoid a mauling, Donaldson is still unhappy with both the management and waste collection companies for the defective dumpster: he claims the dumpster door — specifically designed to keep wildlife out — would not shut automatically as it should have, and needed to be manually slammed shut. The second door, he claimed, was completely frozen shut.

The lawsuit does not, however, explain how the bear managed to lock himself in there in the first place.

Donaldson claimed in his suit that long-term residents knew about the defective dumpster for months; but he, as a visitor, was oblivious to the potential death trap.

Having suffered a full-thickness tear of the Achilles tendon that required immediate surgery, as well as a Caudal-Equine spinal compression that required spinal fusion, he demanded the companies bear the cost of his $15k recovery.