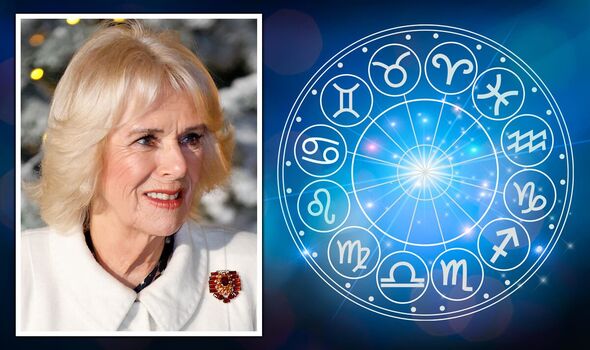 Queen Camilla is set to face some major changes in 2023, according to astrologer Jessica Adams. She spoke exclusively to Express.co.uk about what the latter part of the year holds for the royal.

As we go into a new year, many of us think about what the stars have in store for us.

The Queen Consort had a huge year in 2022, what with the sad passing of her mother-in-law Queen Elizabeth II.

With this, the 75-year-old royal has had to undertake more duties and responsibilities as she continues to support her husband King Charles.

Jessica Adams told Express.co.uk some key dates in the latter part of 2023 that will rock Camilla and the monarchy.

The astrologer predicted two key dates in September and October that spell change for the royal.

She claimed: “There will be historic choices for Camilla about the family on the Full Moon in Aries, September 29 and the New Moon Eclipse in Libra, October 14, 2023.”

These will signify a “new beginning” for the Queen Consort. Jessica predicted that this will not just affect Camilla’s relatives but her residence too.

Queen Camilla and King Charles currently live at Clarence House in London, worth an extraordinary $76.5million (£56.6million) according to Fox Business.

Yoga Journal explained the significance of a full moon and a new moon.

A full moon occurs when the sun is in opposition to the moon, creating a full moon from Earth’s vantage.

“The full moon is a time to be receptive, to take the light and awareness of spirit into your emotional and physical body.”

The new moon lies between the Sun and Moon and is in full shadow, not reflecting light to us.

It is “commonly known as a time to initiate beginnings” – “beginning a new cycle and ending the phase that came before”.

Jessica predicted a few more key dates for the Queen Consort in 2023.

She claimed: “March is the beginning of the most difficult period yet for Charles with Harry and William, and his grandchildren. Dates to watch include Friday, March 24, 2023.”

March will also be the “beginning of the end of Camilla’s long association with Diana in the public’s eyes”.

The karma between Charles, Diana and Camilla is set to end on July 17.

March will also see financial changes in the Royal Family, with the Firm’s finances, property and priceless assets divided a second or third time following the final settlement of Her Majesty the Queen’s legacy.

Jessica Adams concluded: “March also changes the nature of the marriage between Camilla and Charles, but also the relationship between her and first husband, Andrew Parker-Bowles.”