Campaigning in the COVID-19 era splits Liberals and Labor

Planning an election campaign and wrangling the dozens of journalists, photographers and camera operators is a logistical nightmare for any leader’s office.

Holding a federal election in the era of COVID-19 adds a whole extra layer. 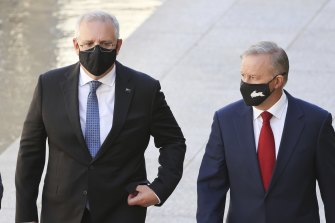 An election is anticipated to be called in the next three weeks – it has to be held by May 21 – and the offices of Prime Minister Scott Morrison and Labor’s Anthony Albanese are working with campaign headquarters to be ready whenever C1 heads to the Governor-General’s residence in Yarralumla.

The major parties have largely agreed on the need to follow health advice and how best to stem outbreaks over the two years of the pandemic.

But for the coming campaign trail, they have diverged significantly.

Advice from the Liberals to media says anyone on the Morrison bus “will be required to follow the relevant state and territory COVID regulations at all times”.

As the rules stand, if the campaign heads to the marginal seats in western Sydney everyone can be mask-free (unless the Prime Minister ventures into a hospital or an indoor music festival with more than 1000 people). But if he heads across the Nullarbor to campaign in several key seats in Perth, masks are mandated everywhere indoors and there are limits on gathering numbers.

Should any reporter on the Liberal trail catch COVID, they’re off the bus and it’s up to their media company to manage their isolation.

Mr Morrison understands well how this works: he spent a week in iso earlier this month after catching the virus.

Labor HQ has much stricter rules.

To start with, all media travelling with Mr Albanese have to provide proof of being triple vaccinated.

No matter which marginal seats the campaign trail wends its way to, everyone following the Labor leader has to wear an N95 mask any time they’re indoors, in a crowded area, on the bus or on a plane.

Plus everyone is strongly encouraged to follow all the infection prevention measures the nation has become familiar with, such as social distancing and frequent hand hygiene.

Labor is also instituting a testing regime where rapid tests must be used every three days and the results reported to the campaign’s COVID safety officer. Lucky rapid tests are plentiful these days – Labor won’t be providing them to media.

Mr Albanese has not caught COVID to date. Labor says it has contingency plans for if he does fall ill during the election but it is keeping them closely held – as with any campaign planning.

Should the virus find its way onto the bus, the response is the same as the Liberal camp: if you’re positive, you’re off.