Canberra must take the initiative in quarantine system

When hotel quarantine was first implemented last year after a meeting of the national cabinet on March 27, each state was given less than two days to establish their own program. There was little in the way of national guidelines or ground rules they had to follow. Prime Minister Scott Morrison offered some logistical and other support, but he made clear that “arrangements will be run by the state and territory governments in each state”.

As Victoria knows well, the ability of each state and territory to stand up such a complex program on such short notice was not always up to scratch. Victoria initially kept the virus contained to hotels, but by the end of June it was becoming clear there were some serious shortcomings. 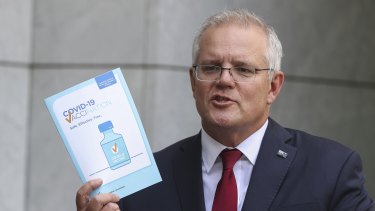 Scott Morrison has avoided taking too much responsibility for hotel quarantine. Credit:Alex Ellinghausen

As the public hearings during the state’s hotel quarantine inquiry, led by Justice Jennifer Coates, made clear, there was enormous buck-passing not only by senior ministers but the heads of the government bureaucracies ostensibly in charge. What also became clear was the total lack of any oversight at a national level.

Once the outbreak had spread through the community, and Victoria headed into a long lockdown, the federal government sent in support, but had no intention of taking charge. It left the state government little option but to shut down its botched quarantine program until it had the capacity to reset many months later.

But with continuing outbreaks in most states, there are increasing calls for the federal government to take a more active role. Professor Lidia Morawska, director of the International Laboratory for Air Quality and Health at the Queensland University of Technology, has called on quarantine to be led from Canberra after sharing concerns about the lack of focus by the states and territories on the ability of airborne transmission to spread the disease.

Adrian Esterman, a biostatistics and epidemiology professor at the University of South Australia, said he had been calling for a nationally driven quarantine response for months. He says the idea that vaccination will be a “silver bullet” against further outbreaks, even if every high-risk hotel quarantine staffer in Australia is immunised, is just wrong.

While the federal government has committed to expanding the capacity at the Howard Springs quarantine facility in the Northern Territory, and is considering a proposal for a 1000-bed purpose-built quarantine site in Toowoomba, 130 kilometres west of Brisbane, Mr Morrison is still very reluctant to take a more active role beyond offering further logistical support when requested.

With the global containment of COVID-19 still a long way off, Australia’s hotel quarantine system is going to be with us for the foreseeable future. Section 51 of the Australian constitution does give the Commonwealth, not the states, the powers to quarantine. While avoiding responsibility for the troublesome program may be politically savvy, the question has to be asked whether it is the best outcome.

If the quarantine programs are to be as effective as possible across Australia, surely it is time the federal government played a more active role in this crucial system that has been the bulwark in protecting Australia from the worst of the pandemic.

Note from the Editor

The Age’s editor, Gay Alcorn, writes an exclusive newsletter for subscribers on the week’s most important stories and issues. Sign up here to receive it every Friday.