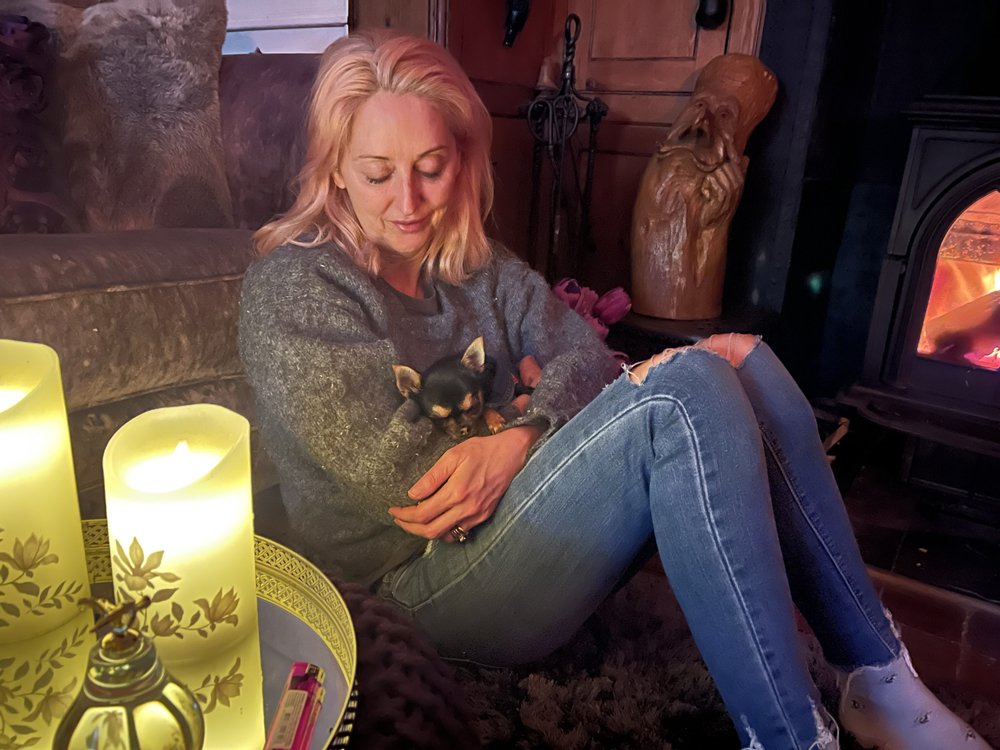 Little Twiggy is a pageant-winning pooch with attitude, but a recent injury could put her hopes of runway stardom on hold.

The chihuahua, named after the renowned fashion model, broke her leg hopping off a six-inch step, forcing her distraught owners to fundraise for the £2,700 operation to fix it.

Twiggy, who is so pampered by part-time carer Angela Elvin, 51, and her design engineer husband Daren Elvin, 54, that she has a wardrobe of outfits and her own bedroom, had the nasty fall two weeks ago.

Angela, who lives with Daren and two of their children, Saffy, 18, and Violet, 15, in Ironbridge, Shropshire, said: ‘She is such a trooper, you wouldn’t believe she had broken her leg.

‘She must be in pain but she doesn’t show it.

‘I just don’t know where we are going to get the money from for the vet bills. The costs for everything are astronomical now.’

The family don’t have insurance for Twiggy due to an earlier health condition that caused complications. So, desperate to help the little dog, Angela and Daren, whose two older children have left home, have launched a GoFundMe page, to try and raise the money needed.

They initially got Twiggy back in March 2020 from the website PreLoved. At 11 weeks old she weighed just 325g and was an instant hit.

Angela said: ‘She was even smaller than the picture we saw her on, we couldn’t believe it…

‘Everything we bought her was huge. The teddy bear looked massive next to her and the toys we bought her looked ridiculous, as they were so much bigger.

‘She looked like a tiny dot in the corner of her dog bed. We had to use this kitten harness on her, because she was so small.’

Despite being smaller than the family’s other pets – three cats and three tortoises – she’s still ‘100% the boss’ around the house, says Angela.

Twiggy even has her own bedroom and a wardrobe of mini outfits, from jazzy coats to pyjamas and onesies.

It was the attention she got from locals while out on walks that prompted Angela to enter the dog in the Chihuahua Town Festival pageant last August.

‘I spotted it on Facebook and I thought it would be a laugh,’ she said.

Angela continued: ‘We had no idea what to expect. It was so funny, because it was such an extravaganza with all these dogs in ball gowns. That just wasn’t Twiggy’s style, so I bought this pink feather boa off Amazon for a tenner and just stitched it on to these pyjamas.

‘Everybody was saying how much they loved the outfit and asking where it was from.’

Judges said that Twiggy had ‘model pins’ like her namesake, and she won out against 40 other entrants in the Miss Chihuahua Town and Best Dressed categories.

But sadly, the spindly pins that garnered compliments on the runway were her downfall. In April, Twiggy stumbled from a step in the back garden.

Angela said: ‘She had just stepped down into our back yard, jumped off the bottom step and flipped onto her side.

‘The step is literally six inches high and she has never done it before. It is devastating.’

A £491 X-ray revealed that Twiggy has cracked one of the bones in her right wrist, which is now protruding to the side.

Vets have estimated that it’ll cost £2,700 to put a pin in the fracture, although Angela is hoping to find an alternative that’ll put less stress on the fragile dog.

As well as her broken leg, Twiggy has a liver shunt, which she was diagnosed with a year ago.

An abnormal connection between two veins, allowing blood to bypass, or shunt around the liver, it was discovered after an incident where her blood sugar levels suddenly dropped.

Angela explained: ‘One day, we woke up and she had a fit. We rushed her to our vet and they gave her a drip of glucose solution which saved her, but now she can’t regulate her blood sugar.

‘They said she might not make it to two, but she’s already defied that prognosis as she’s two now.

‘But this makes her even more precious to us. Twiggy means the world to us and makes us laugh every day.’

As their vet doesn’t accept payment plans, Angela and Daren are facing having to take out a loan to repair their beloved pet’s leg.

‘We haven’t done anything since her accident, we are saving everything we
can,’ said Angela.

‘But everything has gone up, my gas and electric bill has risen and I didn’t know what else to do but to try and crowdfund.

‘I feel so embarrassed doing a GoFundMe for Twiggy, but she can’t go on like this.

‘She is so lovely and inquisitive and playful and she is friendly with everyone. She is everything to us.’

To donate to Twiggy’s operation, visit the GoFundMe page here.