Is this the best Christmas decorating hack EVER? Cling film trick will save a LOT of time and effort

Decking the halls and preparing your home for Christmas might seem like a mammoth task for some.

But now one Twitter user has revealed his nifty trick which will save tons of time and hassle when setting up a new Christmas tree.

Dylan McGuire, from Waterford in Ireland, shared the hack on Twitter, posting a photo of his tree wrapped in clingfilm.

He commented: ‘Wrapped my tree in cling film like this last year. This year it took seconds to open it with a knife and as I kept all the decorations on it.’ 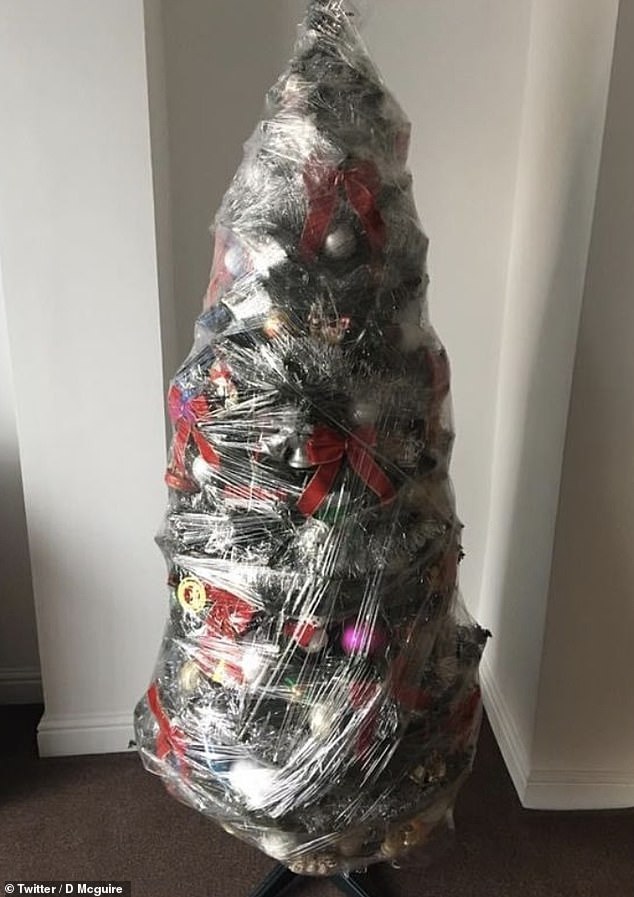 Twitter user Dylan McGuire, from Ireland, has revealed his nifty trick which will save tons of time and hassle when setting up a new Christmas tree

‘I didn’t have to spend ages decorating it. Will definitely be doing that again.’

One wrote: ‘Great stuff,’ while others wrote ‘legend’ and ‘this is brilliant’.

Others praised it for being ‘cat proof’ while another remarked that the tree had kept all its needles – perhaps not realising that it is fake.

Fans went wild for the post, which has got 16,500 likes and been retweeted 1,264 times, with many praising the idea

The hack comes after another social media user showed how to create a ‘firework effect’ on a Christmas tree.

Teana, from Melbourne, has received more than one million views on TikTok since posting her unconventional tinsel trick.

It involves wrapping tinsel around a single branch and then snipping off the excess with scissors.

She then continues to snip the strands of tinsel – and says the process only takes 30 minutes to do an entire tree.

Dylan McGuire, from Waterford in Ireland, shared the hack on Twitter , posting a photo of his tree wrapped in clingfilm

Her trick was a hit on social media.

‘I was skeptical at first but the end result looks amazing,’ one woman wrote.

‘So cute. I am obsessed,’ wrote a second.

Another mother-of-two who used to spend £800 on Christmas presents has revealed how she’s budgeted her family-of-four’s festive celebrations down to just £300. 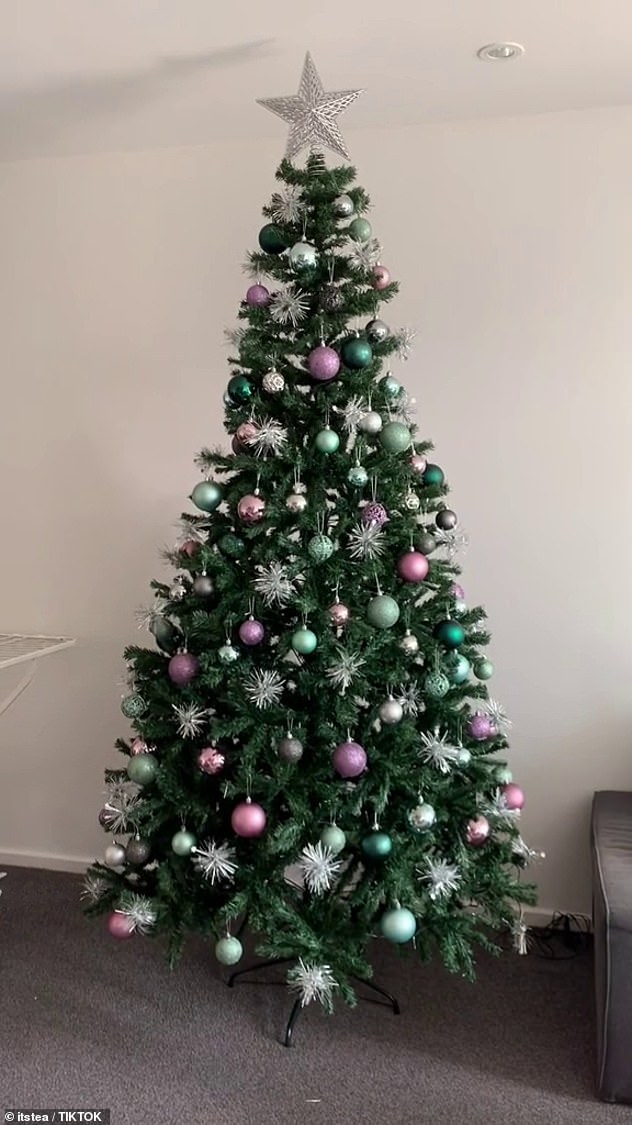 Using only a pair of scissors Teana, from Melbourne wraps the tinsel around a single tree branch tip and snips the excess off to reveal the desired firework effect 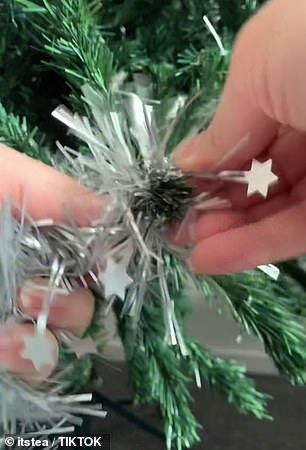 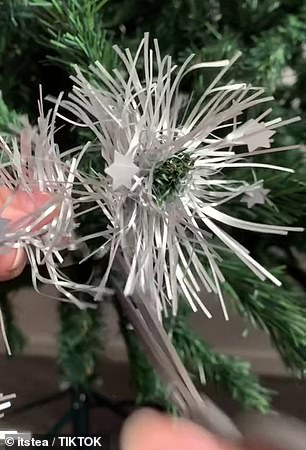 Teana recommends using Christmas tinsel that contains a wire inside, as the wire helps to wrap and hold around the individual tree branches better

The mother – who has managed to feed her family-of-four for £40 a week amid the cost of living crisis – explained: ‘We have had to cut back hugely as a family to be able to still try and keep the life we have and enjoy it.’

Instead of buying her two children a selection of new toys, the thrifty parent is now making the most of local charity shops and has purchased three second-hand presents for her eldest daughter for only £20.

She said: ‘I have grown up on car boot sales each and every Sunday since the age of four and now my girls do exactly the same. In the past, I’ve always made sure to search high and low in the charity shops as well.

‘But this year, I’ve used them more than ever. You’re not just buying and gifting second hand items, but you’re also donating to the charities who are undoubtedly struggling as well.’ 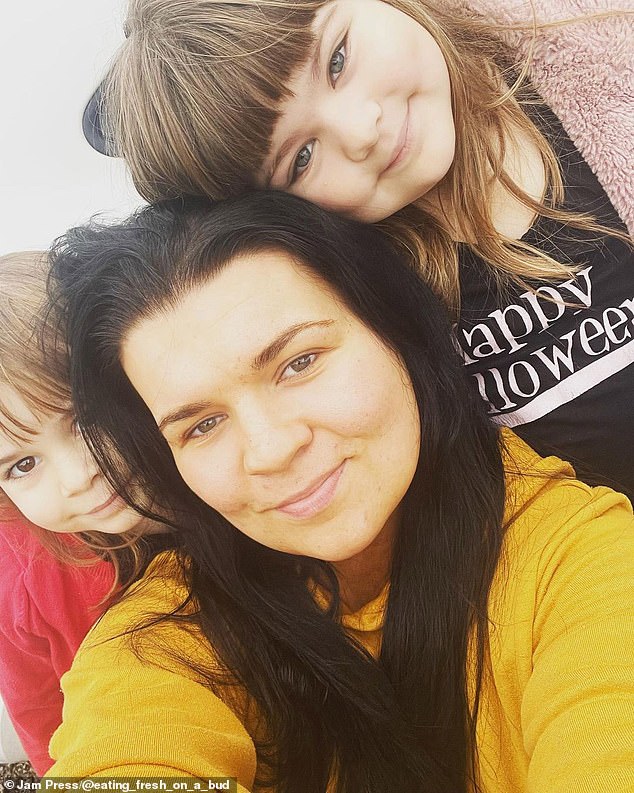 Stacey Victoria, 33, with her daughters Emily and Isabelle. The thrifty mother-of-two used to spend £800 on both their presents but has now whittled down the family’s entire Christmas budget to £300 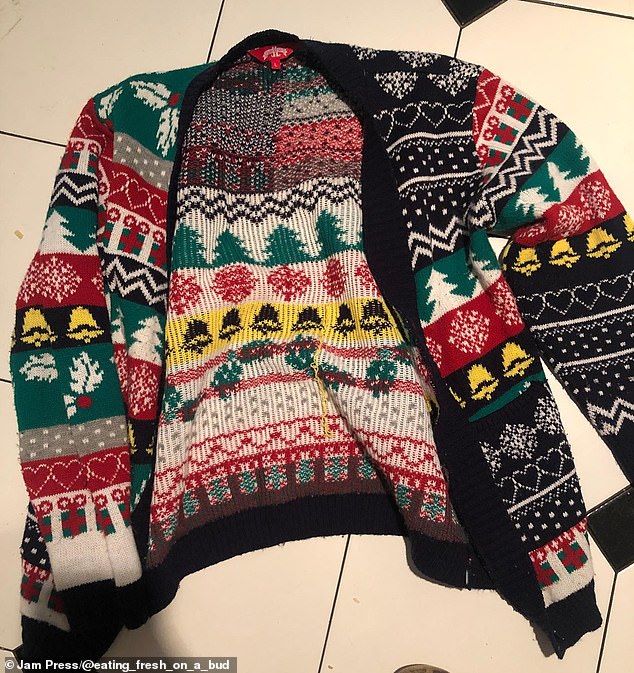 The savvy mother says she’s making the most of charity shops amid the cost of living crisis. Pictured: a £1 cardigan that Stacey has bought her daughter 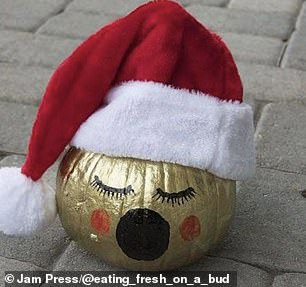 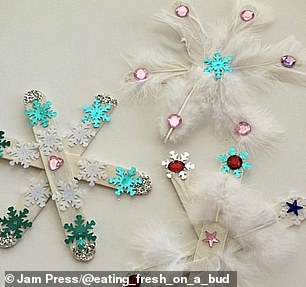 Stacey is opting for homemade decorations this year to save money. Pictured left: a gold spray-painted Halloween pumpkin. Pictured right: The mother got her daughters to make snowflake decorations out of lollysticks to display around their Huddersfield home