The powerful lobby group representing registered clubs in NSW has taken the state’s gambling regulator to the Federal Court in a bid to force it to hand over information from a whistleblower who raised concerns about widespread money laundering.

Lawyers representing ClubsNSW said it was tipped off about the whistleblower going to the regulator, Liquor and Gaming NSW, after MPs including Finance Minister Damien Tudehope spoke in Parliament about money laundering through poker machines in NSW clubs. The subpoena was sent to the regulator, which ordered the independent inquiry into casino group Crown Resorts’ suitability to hold a casino licence in NSW, on the same day the explosive Bergin report exposing serious governance failings at Crown was tabled last week. 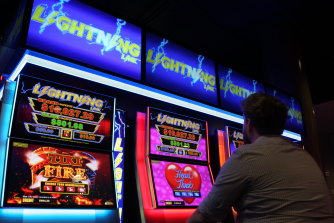 ClubsNSW says confidential information was provided to the body that regulates the industry. Credit:Peter Braig

Money laundering has emerged as a major issue for the gambling industry after the Bergin inquiry found evidence dirty money has been washed through Crown’s Melbourne and Perth casinos. Commissioner Bergin said an examination of a 2019 investigation by The Sydney Morning Herald, The Age and 60 Minutes into Crown that sparked the inquiry confirmed Crown had “facilitated money laundering” through its bank accounts. The chair of the regulator Philip Crawford warned money laundering was also occurring in NSW.

“Where do the money launderers take their money … we just don’t want it washing into the suburban pubs and clubs,” Mr Crawford said in the wake of the Bergin report.

The subpoena says ClubsNSW believes Troy Stolz, its former anti-money laundering compliance auditor turned whistleblower, “may have disseminated confidential information” to Liquor and Gaming NSW “contrary to his post-employment restraints”. ClubsNSW was “put on this train of inquiry” after comments made in the upper house by independent MP Justin Field and Mr Tudehope “regarding poker machines and money laundering, which indicate that [Mr Stolz] has been engaging with Liquor and Gaming NSW”.

Mr Stolz is also being sued by ClubsNSW after he gave a confidential ClubsNSW board paper to independent federal MP Andrew Wilkie. The paper, written in May 2019, outlined ClubsNSW’s concerns about poor levels of money laundering compliance within its 770 member clubs. ClubsNSW employs more than 35,000 people.

ClubsNSW is a significant donor to both sides of politics and was exempt from a ban introduced in 2010, which prevents donations in NSW from liquor and gaming business entities.

Mr Stolz said the February 22 hearing in the Federal Court would make whistleblowers fearful to speak up.

“If ClubsNSW were to be successful in this application in the Federal Court, it certainly would end whistleblowers coming forward to Liquor and Gaming NSW, other agencies, and at all,” Mr Stolz said.

Mr Field said the reputation of the gambling industry “is in tatters after the Crown inquiry and the demonstrated links with organised crime and money laundering”.

Poker machines can be used to wash money because a person can enter a club and put through a significant amount of money in a machine and then cash out most of that sum within a short period of time.

In a statement, ClubsNSW said: “This matter is playing out in court, and we are confident the evidence will support our position.”

The Bergin report included support for a gambling card as a tool to combat money laundering. NSW Minister for Customer Service Victor Dominello, who is responsible for liquor and gaming, wants gamblers to register for a card that is pre-loaded with money and used similarly to cashless Opal cards on public transport.

“There’s no justification for the state government to introduce such a massive cost impact on pubs and clubs, or such a privacy invasion on patrons. Any speculation … needs to be quashed immediately,” Mr Barilaro said. “There is no need for consultation or discussion papers.”

A spokeswoman for ClubsNSW said a mandatory gambling card would present considerable unintended consequences for pubs and clubs, which were never the focus of the Bergin inquiry.

“Commissioner Bergin made a passing reference to it in her 800-page report on Crown,” she said, adding that the idea was a “non-starter”.

Mr Dominello did not want to comment on the court hearing but said: “It is important that we maintain a culture where whistleblowers feel safe to come forward with information. This culture must exist in government as well as in organisations”.

Catch all the day’s breaking news

At the end of each day, we’ll send you the most important breaking news headlines, evening entertainment ideas and a long read to enjoy.  Sign up here.