Coalition MPs were given the chance to lobby for regional community grants to go to projects in their electorates that didn’t quite meet the eligibility criteria for a program that disproportionately gave money to government-held seats.

Deputy Prime Minister Barnaby Joyce added $100 million to the fifth round of grants from the Building Better Regions Fund, increasing the pool of money on offer by 50 per cent to $300 million to cover 298 projects. 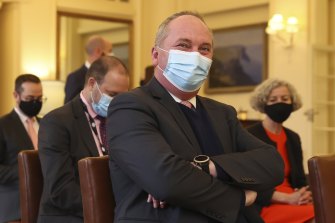 Barnaby Joyce says the Infrastructure Department assessed all the projects which received regional community grants as being value for money.Credit:Alex Ellinghausen

The $1.38 billion fund’s grants can go to community organisations and local governments in areas outside the major cities.

The fifth round was massively oversubscribed, with almost 1100 applications lodged, seeking a total of $1.7 billion.

Those that were successful include building an all-weather pickleball facility in Noosa, a motorsport park in Albany, and a project to paint murals on silos on Kangaroo Island.

The government set aside $256 million in May’s budget for a sixth round of grants.

Under the Building Better Regions program, money is allocated by a ministerial panel once the Infrastructure Department assesses the applications’ economic and social benefits to regional and remote areas. Mr Joyce leads this panel of ministers with regional responsibilities.

Nationals MP for Mallee Anne Webster said she had seen the department’s assessment of the projects and was given the chance to lobby for funding for any that fell below the threshold.

The grant guidelines say only applications that score at least 60 per cent against each of four assessment criteria will be considered for funding.

Dr Webster said the department coded its list with green for those “that actually tick off on the criteria” and pink for “no they don’t quite” meet the benchmark.

“But if an MP wants to really push the project because it’s important for the community, then you’ve got the opportunity to do that,” she told radio station Flow FM.

“I had no pink projects, so only green ones that actually made it into the criteria and ticked off in the green boxes.”

A spokesman for Mr Joyce said all 298 successful projects were assessed as eligible.

“No projects were selected that the department did not categorise as eligible and being value for money,” he said. “MPs of all political persuasions have the ability to advocate for projects in their communities.”

However, Labor’s infrastructure spokeswoman Catherine King said opposition MPs didn’t get the same chance to lobby for projects that didn’t meet the criteria.

“Councils used to call the Building Better Regions Fund a lottery, but now we know that it is nothing more than another taxpayer fund completely hijacked by Barnaby Joyce,” she said.

Dr Webster said she was now approaching councils and organisations in her electorate seeking funding in the next round of grants.

“Obviously, we are going into an election and I want to be able to fight for projects across Mallee,” she said, adding the Nationals were pushing for another funding increase for the next round given how oversubscribed the fifth round was.