In Hollywood studio comedies Jillian Bell is an accelerant added to the smouldering punchlines. Her supporting roles in films such as 22 Jump Street and Rough Night are defined by deadpan comic provocation and a withering wit.

Those performances set Bell up as a breakout comedy star, which is why she found herself nervous and expectant the night before she began shooting her latest movie Brittany Runs a Marathon. She was playing the lead and the dramatic demands outweighed the humorous possibilities. 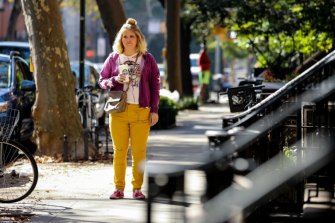 "I wanted to start, but I was also terrified that I would ruin it," remembers Bell, who was in Sydney and Melbourne this week promoting the release of Brittany Runs a Marathon alongside the picture's writer and director Paul Downs Colaizzo. "I got inside my head and ask myself, 'why did you choose this profession when you're terrified of it?' "

At first glance the character of Brittany Forglar appears tailor made for Bell – she's a diffident 28-year-old New Yorker with no career path, a hard partying lifestyle, and a comic repertoire of deflective gestures. But when a doctor not taken in by her request for prescription medication gives her a wake-up call about her failing health and a need to lose weight, Brittany has to confront both her physical and emotional reality.

Even as she recoils at the encouragement of others, Brittany takes up running. While Bell is both convincing and amusing as a quickly exhausted jogger – "I was actually exhausted," she explains, "because between takes I just kept running" – the character's ultimate goal isn't just to complete the New York Marathon, it's to make sense of the issues lingering in her life.

Female characters often get characterized as bitchy or likable and I think this throws that out the window.

"Paul and I thought of it as a drama that had some levity," Bell says. "I really love doing comedy so that comes more naturally than drama, but the script was in such good shape that we could happily stick to it even though we had emotionally difficult scenes to shoot throughout the film."

Colaizzo, who was making the transition to cinema from a flourishing New York theatre career, had based Brittany's 42.2 kilometre quest on one that his best friend and former roommate Brittany O'Neill had undertaken. But the character's personality, the supporting cast – including a Brittany's Gen X neighbour, Catherine (Michaela Watkins), best friend Gretchen (Alice Lee), and fellow house-sitter Jerm (Utkarsh Ambudkar) – and her emotional travails are all fictional. What shines though is how as people they're all recognisable.

"They're characters you've seen in comedies before, but here they're real human beings," Bell says. "Female characters often get characterised as bitchy or likable and I think this throws that out the window. There are moments where you're rooting for Brittany and moments where you're thinking: 'get your act together'. She's a fully realised human being with flaws and that's something I related to and thought other people would, too."

Bell lost 13 kilograms prior to the 28 day shoot through training and diet – and a further five kilograms during the whirlwind independent production. For the 35-year-old Las Vegas native, who moved to Los Angeles to pursue a career in comedy after finishing high school, that program was both a means of preparation and a source of personal illumination.

"Brittany loses sight of her values and goals once she loses the weight because it's fascinating – and terrible – how the world treats you when your body changes," she adds. "I had a lot of people in my personal life put judgments on my body once I lost weight and that's hard to hear. You want to imagine you're still the same person and that one size isn't better or worse than another."

Britany Runs a Marathon is now in cinemas.