“So this is a big day for us because … Congratulations Finny, it’s your last chemo,” the Mean Girls actress, 36, explained via Instagram Story on Wednesday, July 6, sharing a car selfie with her pup. “No more chemo! This is his sixth and final chemo [round today.]” 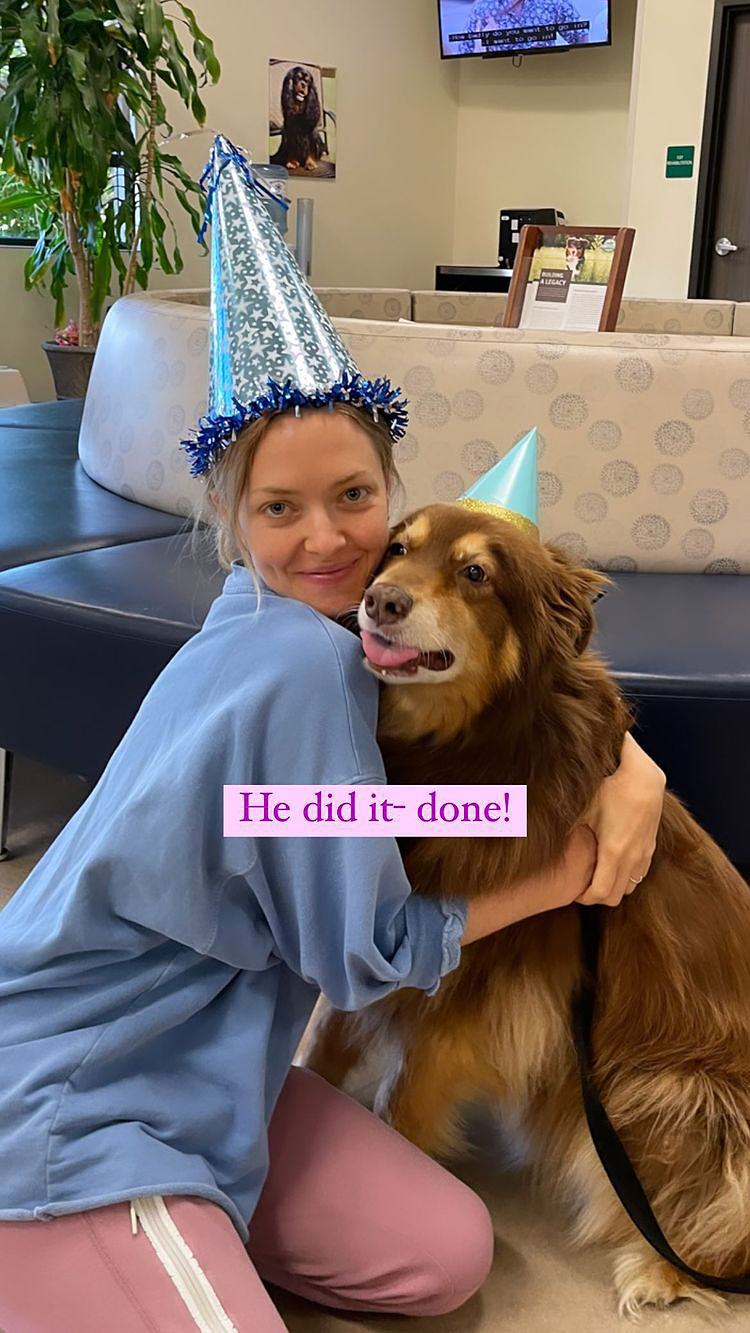 Seyfried, whose pup is a constant presence on her social media profile, reported that Finn has had “no ill effects” and he “doesn’t seem to be bothered” by his treatment since he gets “a lot” of treats.

Farm Fun! See Amanda Seyfried’s Rare Photos of Her 2 Kids Over the Years

“This is all to say that rectal exams are really important because it’s not super, super common cancer but it’s not super, super rare and the sooner you find it, the easier it is to get rid of,” the Mank star — who shares daughter Nina, 5, and a son, 21 months, with husband Thomas Sadoski — explained on Wednesday. “Some vets do and some vets do not perform rectal exams, [so] ask your vet to perform a rectal exam at every checkup [if they can].”

Seyfried — who wed the 46-year-old Life in Pieces alum in March 2014 — also shared a sweet snap with Finn post-chemo as they both wore party hats. “He did it — done,” she captioned her Story post.

The Pennsylvania native’s canine companion has long been a special fixture in her life.

“I actually met [Finn] on the set of Big Love, he was like this big and he looked like a bear,” she recalled during a June 2016 appearance on the Today show. “There were two puppies available from this guy that was a day player on the show, and so, we took them home and I’m like, ‘I’m going to find a home for him, it’s going to be great.’ I took him home … and then I fell in love with him 24 hours into it.”

Amanda Seyfried and Thomas Sadoski: A Timeline of Their Relationship

She added at the time: “Now I’m just obsessed and I’m just so in love with him [and] I hate being away from him. It’s the best thing in the world, I mean, he changed my life and I don’t remember my life before him.”

In addition to Finn, Seyfried and Sadoski have expanded their brood with all sorts of animals, including horses, goats, dogs and turtles.

“I get up, I feed the animals,” the Dear John actress recalled of her daily routine during an August 2020 appearance on John Molner’s Molner’s Table series. “I recently really trained Tommy, my husband, to be able to feed [them.] He knows everything now. He can do everything.”

Seyfried continued: “I live on a farm. It’s what I’ve always wanted! Now, with this [coronavirus] pandemic especially, we’ve been able to just stay. We don’t even get on the train and go [into] the city. … And you know what? Our family is still together. I definitely think my marriage is, like, even stronger.”