Cornwall Confidential: Locals tell all in a new series…

Cornwall confidential: It’s a joy in summer, but what’s it like for the rest of the year? Locals tell all in a new series

As a teenager, Veryan Palmer used to dress up as a mermaid to entertain the children at Newquay’s iconic Headland Hotel. Fast forward 25 years and today Veryan is director of the five-star establishment, having taken over the reins from her parents during the pandemic.

In 2020, Cornwall natives Veryan and her husband Richard gave up their careers in management and finance and returned to the county with their two young daughters to help her parents reopen the hotel after the first lockdown.

‘I think I was always going to return,’ says Veryan, 39. ‘Cornwall’s the very best place to live. There’s such a sense of freedom here.’ 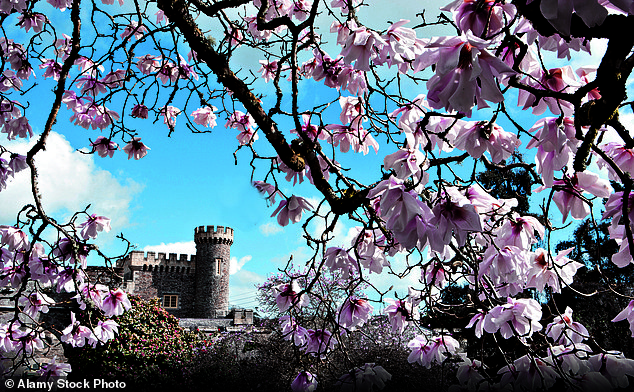 New Channel 5 documentary Cornwall: A Year By the Sea begins in spring on the Caerhays Estate near St Austell (pictured)

Veryan’s sentiments echo throughout Cornwall: A Year By The Sea, Channel 5’s new four-part documentary celebrating the county through the seasons.

It’s narrated by Fern Britton, who moved into her Cornish holiday home permanently following her 2020 divorce from chef Phil Vickery.

‘The series shows the Cornwall you might not know,’ says Fern. ‘The damp autumns. The windblasted winters.

‘And the thrill of spring, before the summer holidaymakers arrive, bringing life back to our beaches.’

Spring is where the series kicks off this week on the Caerhays Estate near St Austell, inherited three years ago by former banker Charles Henry Williams. The gardens, which house one of the country’s largest magnolia collections, attract over 15,000 visitors a year.

‘The beauty of nature is breathtaking,’ says Charles, who sees looking after Caerhays as a privilege. ‘It’s my life’s work, a passion. Do I get job satisfaction? Good heavens, yes!’

Cornwall’s annual influx of four million visitors is worth £1.8 billion to the county’s economy. For Tracey Griffiths, who owns private Lusty Glaze Beach in Newquay, getting ready for summer means first hiring a digger to remove sand from her property.

That might sound counterintuitive, but Lusty Glaze gets a pile-up of excess sand each year. ‘Beaches down the coast lose their sand and for some reason it ends up on mine.’ 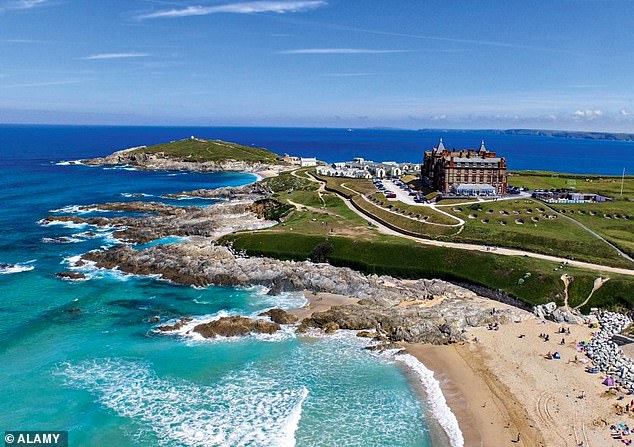 Veryan Palmer, 39, explains how she and her husband gave up their careers in finance and management to take over the reins from her parents of the Headland Hotel (pictured) in Newquay

She likens owning a beach to ‘living on the edge of a volcano and never knowing when it’s going to erupt. Nature can be a fierce opponent.’

Nature can certainly be tricky for father-and-son farmers Charles and Matt Watson Smyth of 1,200- acre Tregirls Farm near Padstow. Having a farm overlooking the sea provides glorious views, but leaves them vulnerable to wind.

‘Gusts of 100mph are common,’ says Charles, 74. ‘When you’re checking on the animals, you have to park the Land Rover into the wind or it’ll blow the door off.’

‘As the water runs over the cliff, the wind blows it upward like a waterfall rising into the air. It looks like someone’s turned a fountain on.’

Back in Newquay, Veryan Palmer is busy overseeing a huge revamp of the 91-room Headland Hotel, which recently opened a £10 million Aqua Club with three indoor and three outdoor pools.

‘As family, we’re looking after the site for future generations, trying to make it something Cornwall can be proud of,’ she says.

This pride in, and love for, the county runs through the series. Charles adores the views from Tregirls Farm so much he has no plans to retire.

‘Every morning I take my dog up onto a cliff with the most spectacular views in England,’ he says. ‘I want my ashes scattered here!’

Cornwall: A Year By The Sea, Thursday, 8pm, Channel 5