The Oscars won't be held for another two weeks, but it looks increasingly likely that 1917 has won the war for best picture.

The World War I drama picked up yet another major prize Saturday night in Los Angeles when the Directors Guild of America gave Sam Mendes its top prize for direction of a feature film. Shot and stitched together to appear as if it were filmed in just two long takes, the technically audacious 1917 has come on strong this month, also claiming top honours from the Producers Guild of America as well as the drama and director trophies at the Golden Globes. 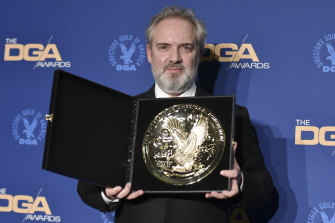 Do any of those films still stand a chance against 1917 at the Academy Awards? Yes, though it's a slim one. Only twice over the last decade has a film won the best-picture Oscar without first taking either the DGA or PGA prizes: In 2015, when the Oscars favored Spotlight over the DGA winner The Revenant and PGA winner The Big Short, and in 2016, when La La Land won both major guild prizes but still fell to Moonlight at the Oscars.

The strongest best-picture spoiler is likely Parasite, the South Korean thriller that prevailed at the Screen Actors Guild Awards this month and could become the first film not in the English language to win the top Oscar. Still, with the momentum of the PGA and DGA prizes, 1917 will be tough to beat.

In other news at the directors' ceremony on Saturday, the trophy for the best first-time filmmaker went to Alma Har'el for Honey Boy. It was the first time a woman had won in the category since it was established five years ago.