Disadvantaged students are falling drastically behind their peers in literary and numeracy skills, with Year 9 students more than four years behind their most advantaged peers in reading in both NSW and Victoria.

An analysis of the 2021 NAPLAN results by the Grattan Institute found disadvantaged students – those whose parents haven’t completed high school – are falling significantly behind their advantaged peers whose parents have a university degree, with the gap evident from Year 3 and widening over time. 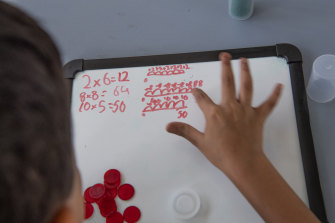 Results in this year’s NAPLAN tests show significant gaps in reading and numeracy skills between disadvantaged and advantaged students, but the gaps were not exacerbated by the 2020 lockdowns.Credit: Louise Kennerley

Jordana Hunter, the school education program director at the Grattan Institute, said the significant gaps were entrenched before COVID and persist despite decades of attempts to close them.

In Victoria, the disadvantaged students are two years behind in reading in Year 3, and four years and 5 months in Year 9, while in numeracy the gap widens from one year and five months in Year 3 to three and a half years in Year 9.

“These gaps are very significant. Closing them should be a top priority for Australian schools.”

The results of the 2021 NAPLAN tests, conducted in May, confirmed there were no significant changes compared with 2019 results despite long periods of remote learning last year, which experts had feared would widen the performance gap between advantaged and disadvantage students. The 2020 tests were cancelled due to COVID-19.

NSW’s schools were shut for seven weeks last year and Victoria’s for more than 20 weeks.

Glenn Fahey, a research fellow in education at the Centre for Independent Studies, said while the tests were conducted before the months-long lockdowns in the second half of 2021, there was no evidence home learning had widened the gap between advantaged and disadvantaged students.

“If there was a significant impact we would likely have seen it in this data already,” Mr Fahey said.

“Even when broken down by parental education status, there’s not consistent evidence that disadvantaged students generally ended up doing better or worse than pre-pandemic,” Mr Fahey said.

“In the secondary classroom, we can see that the gap between boys and girls is widening for reading but stable for writing, and the gender gap is larger in secondary schools than in primary schools for writing,” he said.

The Victorian and NSW governments welcomed the improvement in test scores across a number of measures as a testament to teacher and student resilience throughout the pandemic.

Victorian education minister James Merlino said the state “improved on its results since 2019 in half of the assessed measures – including the critically important foundational reading skills in both Year 3 and Year 5 – despite the challenges of the pandemic”.

NSW education minister Sarah Mitchell said NSW ranked in the top three jurisdictions by mean scores in all domains, except in Year 9 reading, and had the highest mean score in writing for Years 3 and 5, in numeracy for Years 3 and 7, and in grammar and punctuation for Year 3.

“NSW mean scores were above the national average in every test domain in all years,” Ms Mitchell said. “NSW students continue to be Australia’s best spellers, achieving the highest or equal highest mean score of all jurisdictions, for all year levels, as it has throughout the history of NAPLAN.”

Fascinating answers to perplexing questions delivered to your inbox every week. Sign up to get our new Explainer newsletter here.