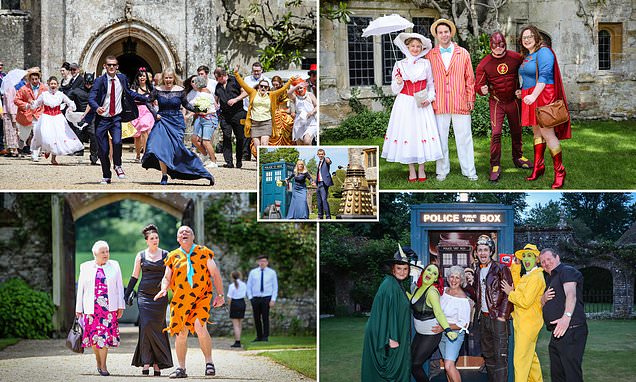 Yabba Dabba I do! Doctor Who mega-fans tie the knot dressed as the Time Lord and Rose Tyler – surrounded by TV and film characters including Fred Flintstone and Mary Poppins

A pair of Doctor Who superfans tied the knot in front of family and friends – all of whom were dressed as their favourite on-screen characters.

Stacey Savage, 29, and Simon Clarke, 40, from Dorset, married at Athelhampton House where an episode of Doctor Who, their favourite show, was filmed in the 1970s.

While Simon dressed as David Tennant’s Doctor Who and his bride appeared as his sidekick Rose Tyler, the happy couple asked guests to come as their favourite fictional figures.

The couple insisted ‘we’re not strange people’, but said they just wanted to have a ‘day to remember’ for their guests. 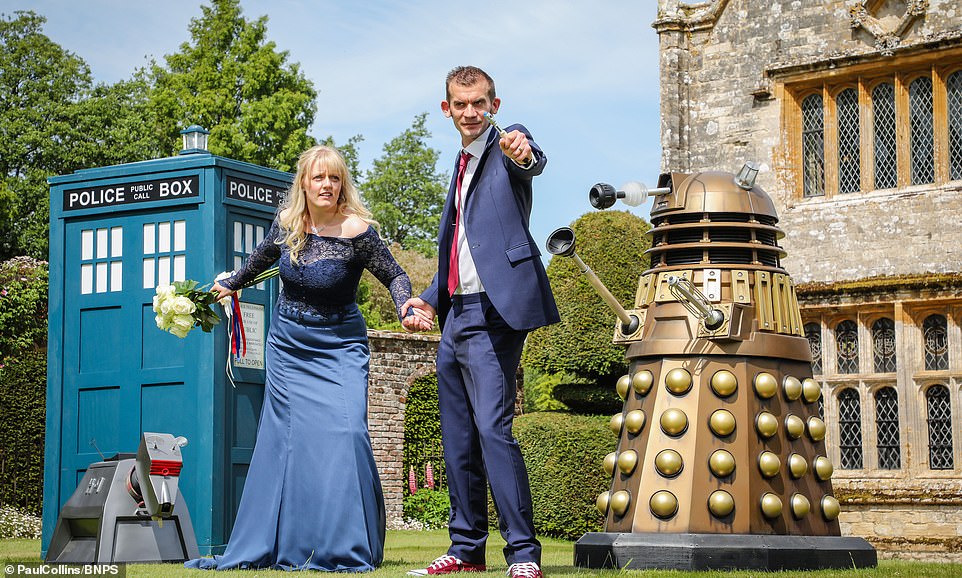 Doctor Who mega fans Stacey Savage, 29, and Simon Clarke, 40, dressed up as their favourite characters from the programme for their wedding 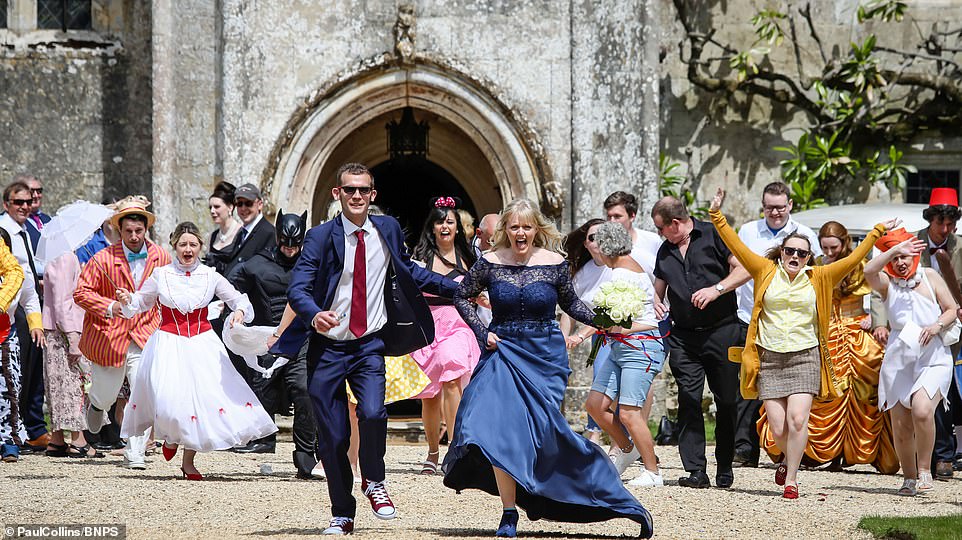 The couple asked friends and family to join them in their costumes, with guests dressing as characters from Mary Poppins and the Flintstones 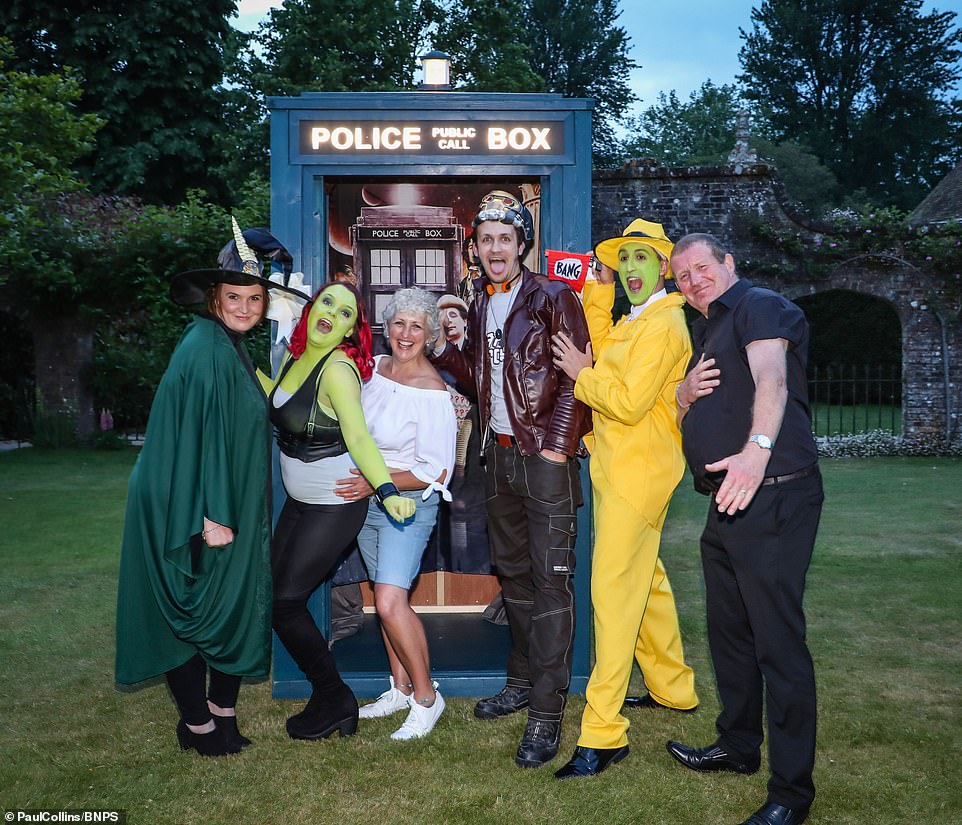 Other wedding guests who joined the party dressed as film characters, including some from Harry Potter, The Mask and Star Wars 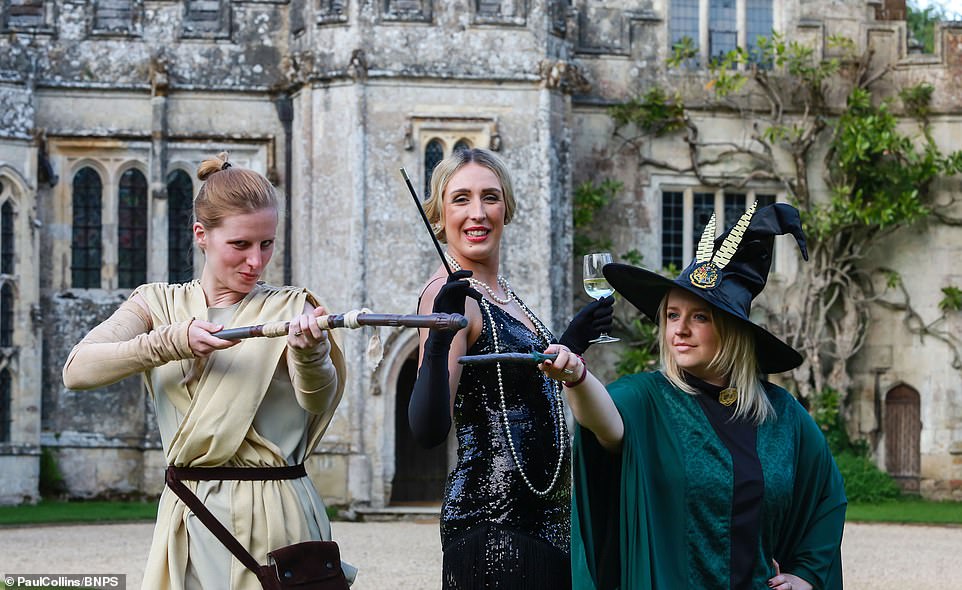 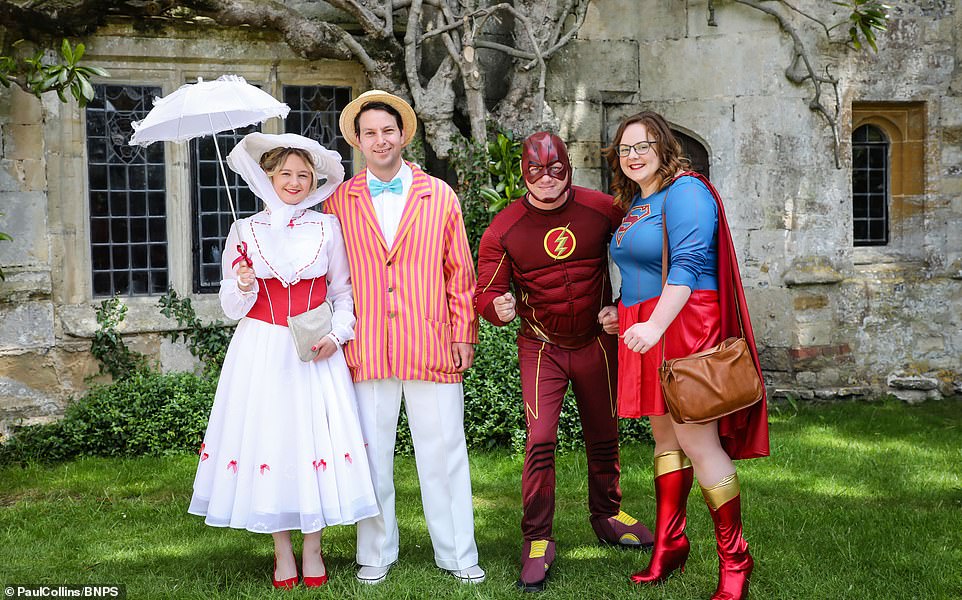 The wedding saw hilarious characters meeting including guests dressed as superheroes Supergirl and The Flash, alongside characters from Mary Poppins 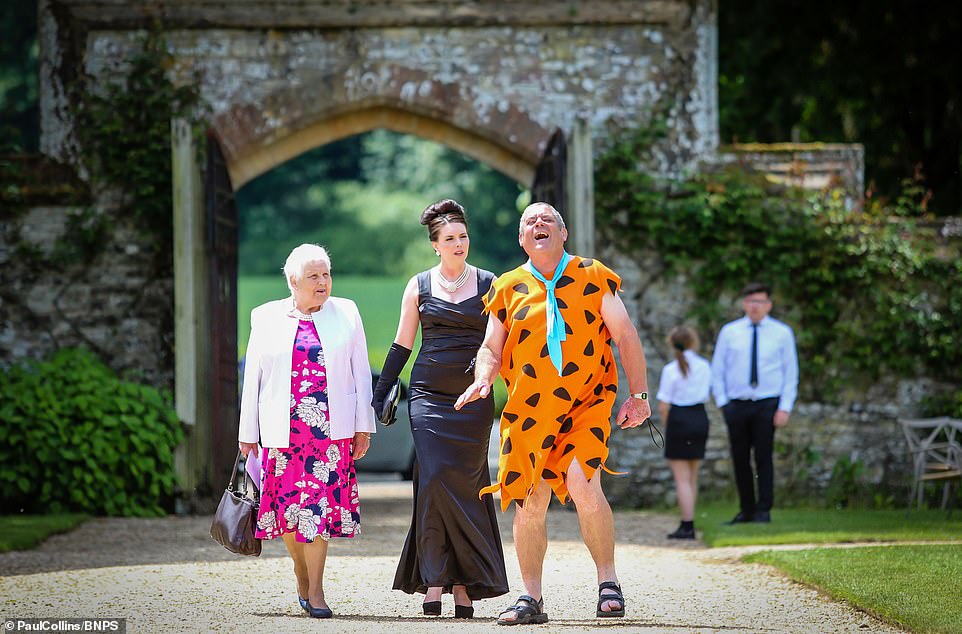 Yabba Dabba Doo! One of the guests arrived dressed as Fred Flintstones, while another wore an Audrey Hepburn costume for the big day

Among the crowd of 100 well-wishers were versions of Audrey Hepburn, Mary Poppins, Homer and Marge Simpson and Toy Story’s Woody and Jessie.

The bride’s parents got into the spirit by arriving as the Julia Roberts from Pretty Woman and Richard Gere from An Officer and a Gentleman.

Other fancy dress outfits included Jim Carey from The Mask, Wolverine, Fred Flinstone, Batman and even a T-Rex from Jurassic Park.

The couple also had various film and TV props on display, including a Dalek, a Tardis and K9 the dog from Doctor Who. 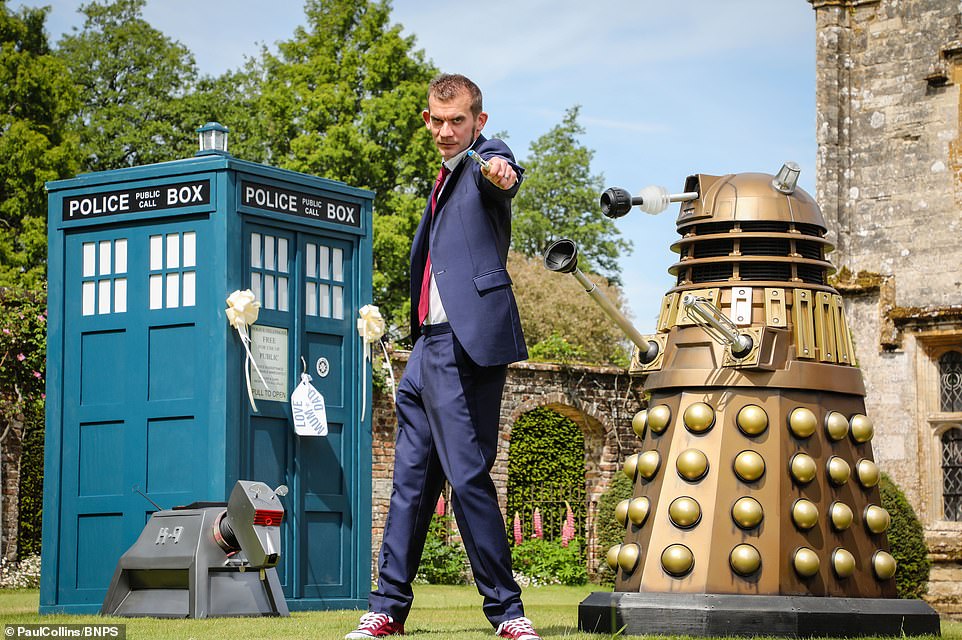 The couple – who are Doctor Who superfans – chose a selection of props from the TV series for their big day, including a dalek and blue police box 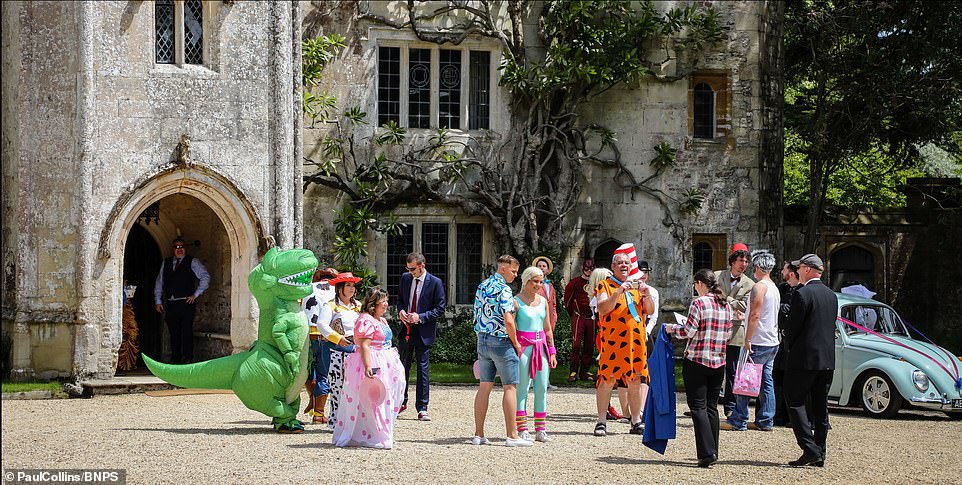 The bride and groom chose their venue at Athelhampton House in honour of Doctor Who, after an episode was filmed there in the 1970s 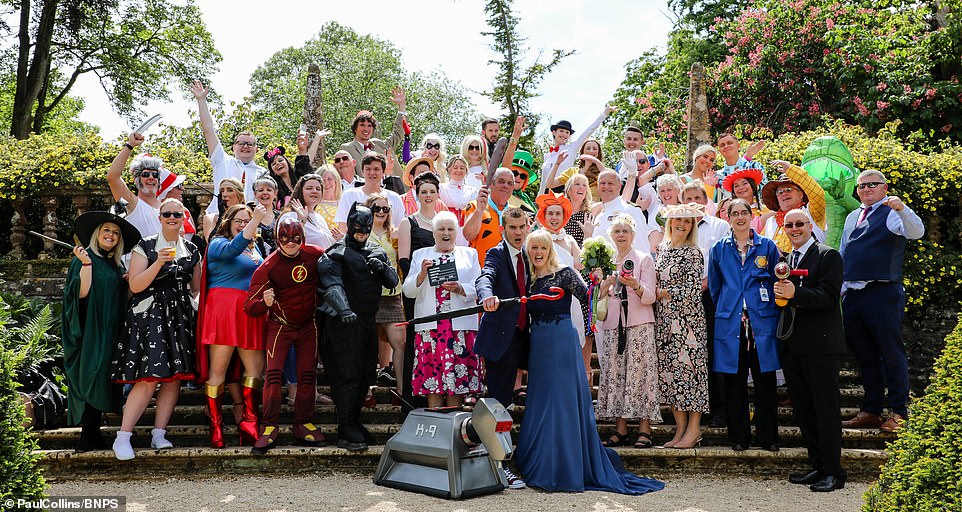 Stacey said she was happy ‘everyone got into the spirit of things’, and said she ‘giggled’ all the way down the aisle looking at the sea of colour 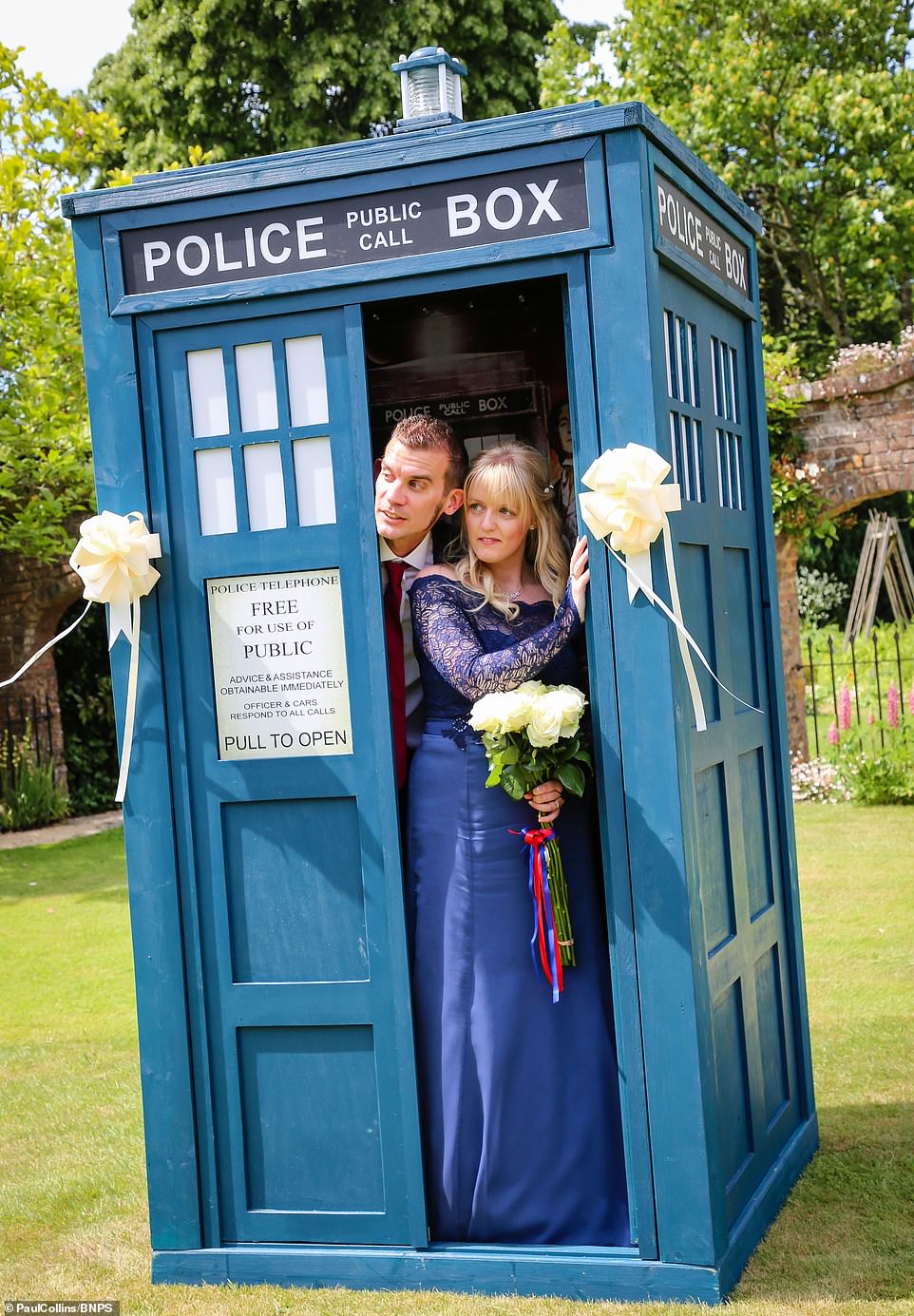 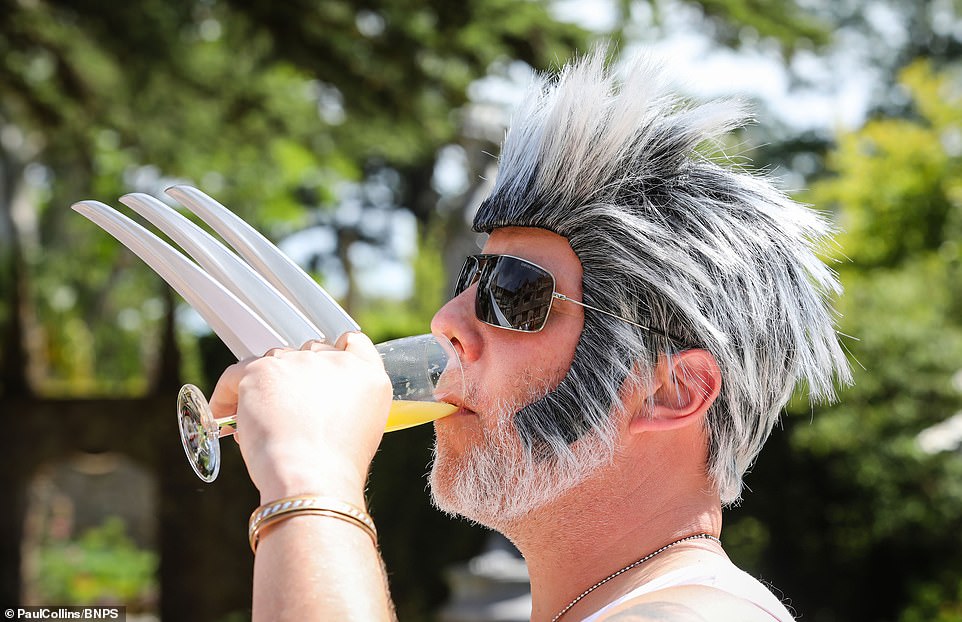 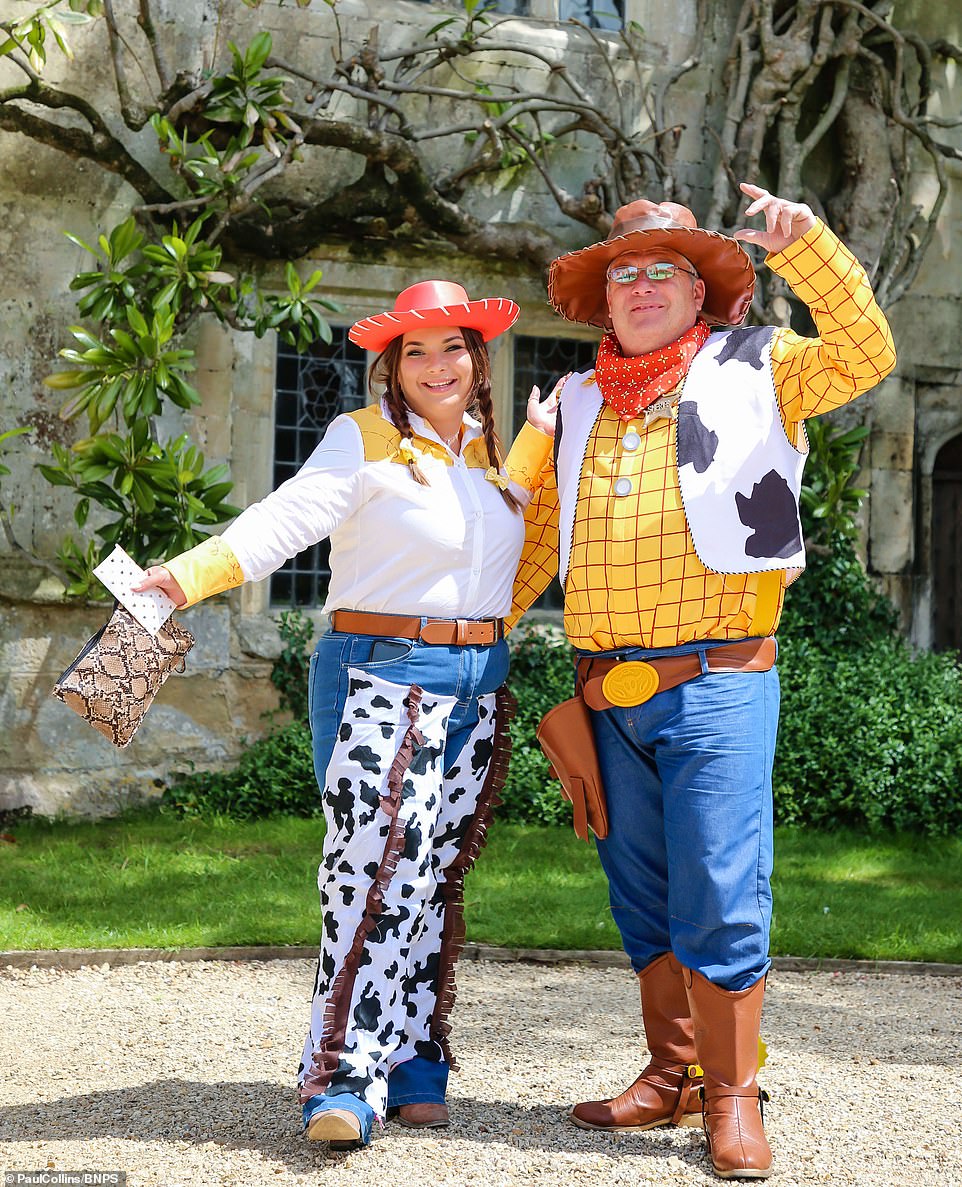 Other guests donned outfits from their favourite Disney movie Toy Story, with one dressed as cowboy Woody and the other cowgirl Jessie 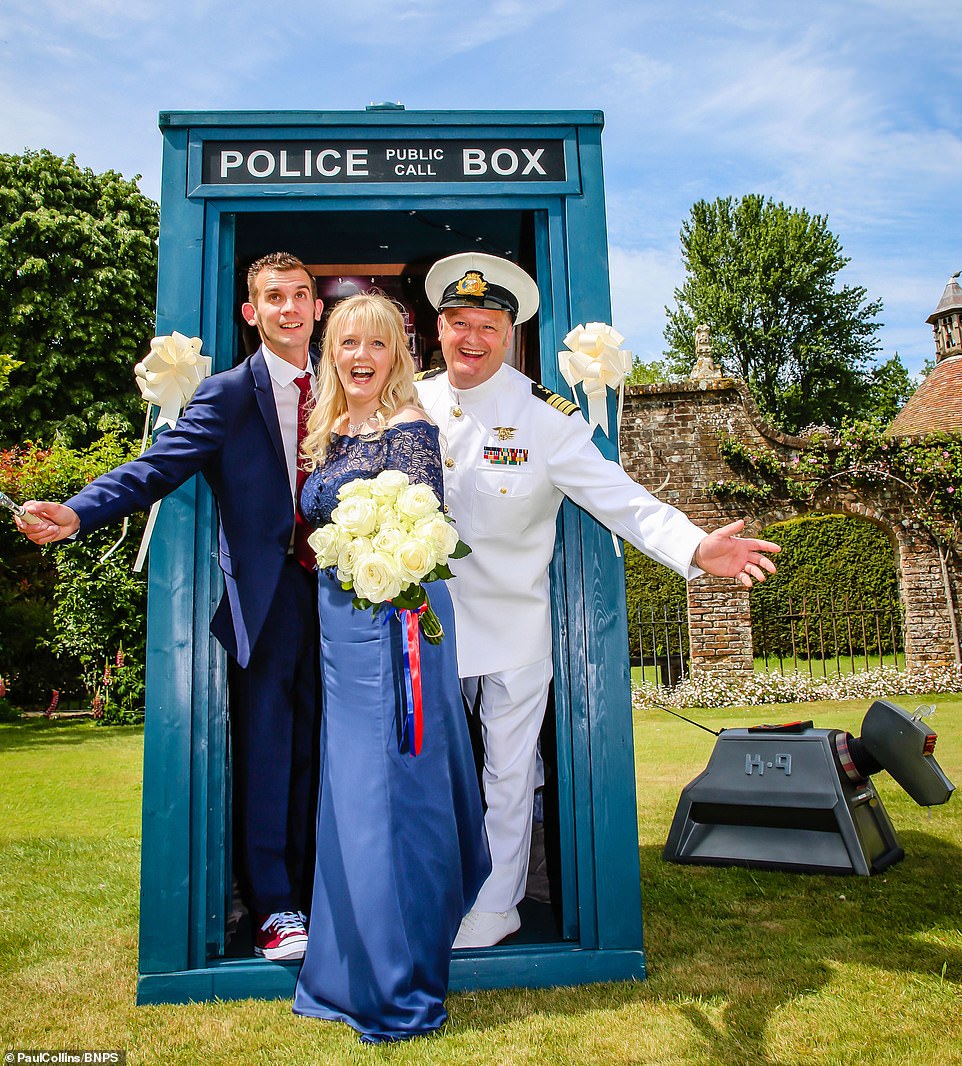 Stacey, pictured here with husband Simon and one of the guests, said she wanted the day to be about more than ‘a pretty dress and a nice cake’ 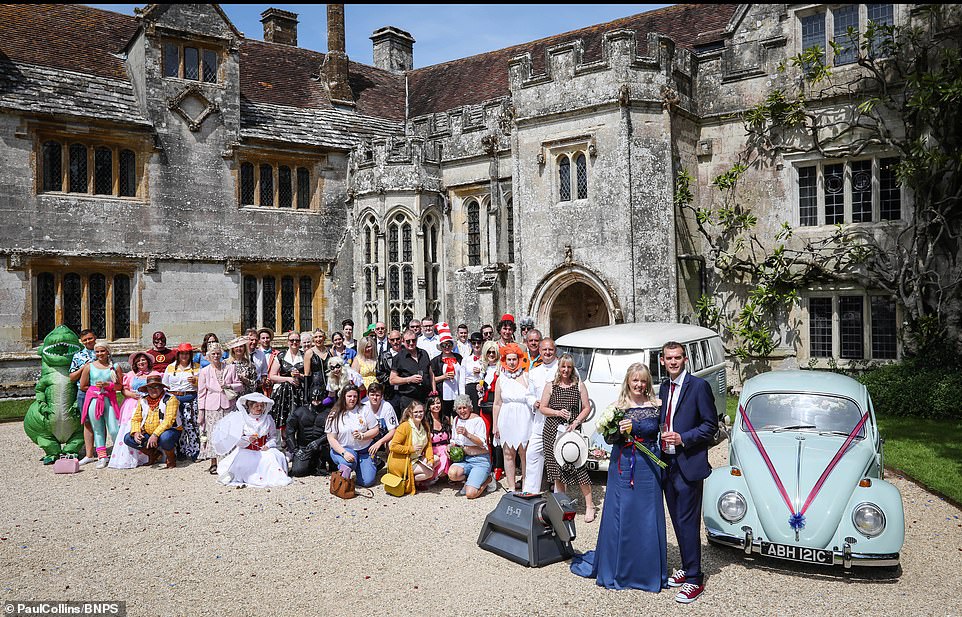 The couple,  pictured here with their 100 wedding guests at Athelhampton House in Dorset said they were overjoyed with the costumes 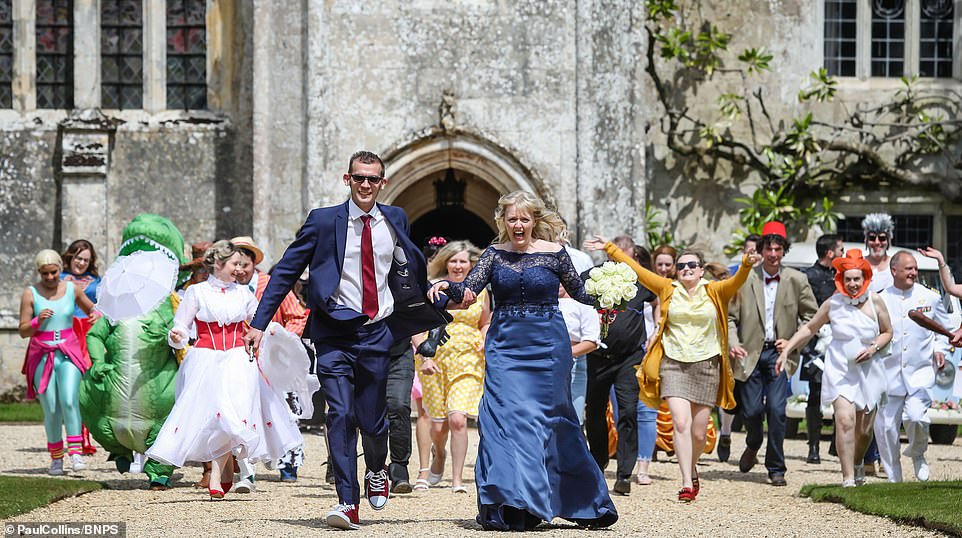 Stacey, who works at a solicitors, said she wanted the day to be extra special.

She said: ‘As I walked down the aisle and saw the sea of colour I just giggled all the way to the front.

‘We are not strange people but we are both a little bit different and wanted a day people would remember for more than a pretty dress or a nice cake. 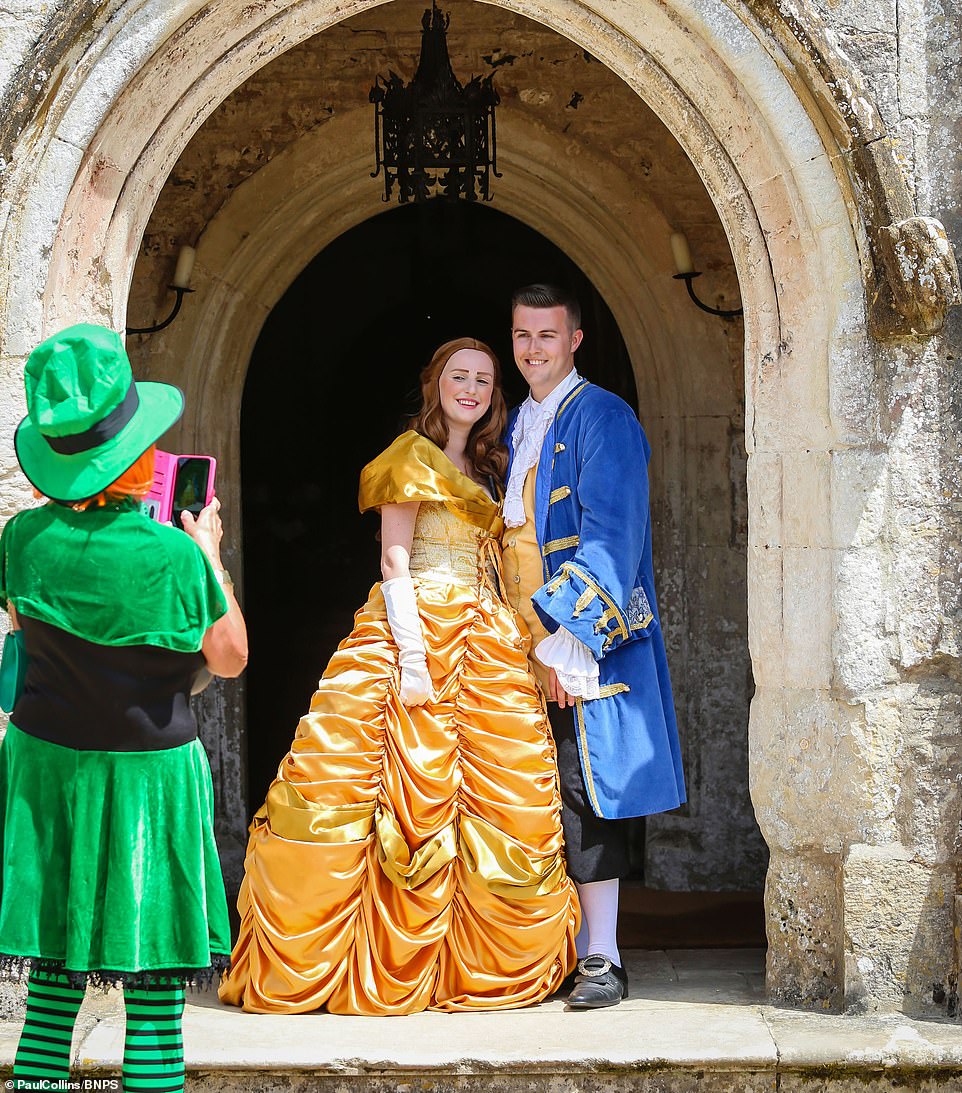 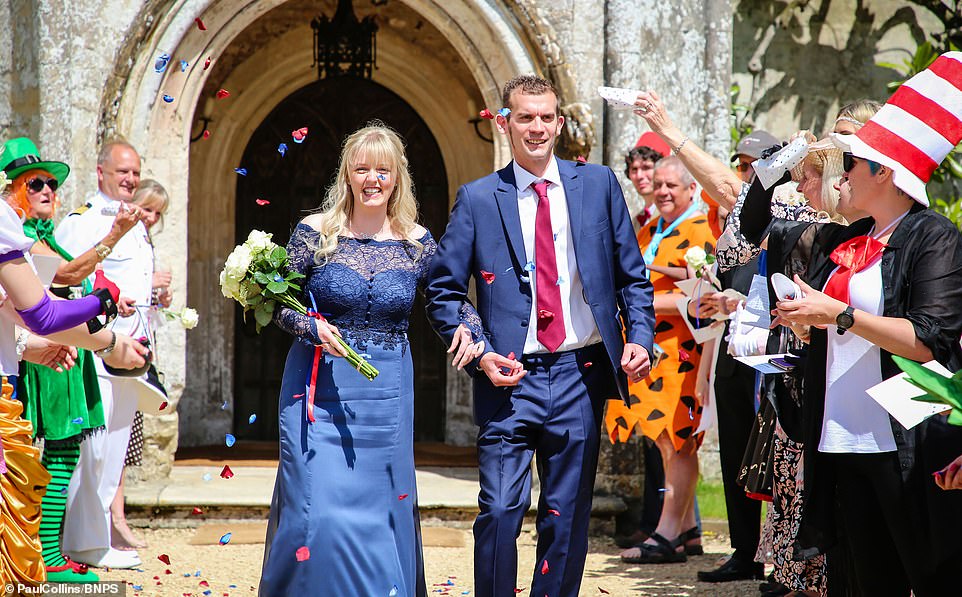 The happy couple dressed as David Tennant’s Doctor Who and his sidekick Rose Tyler for their wedding, which they called ‘amazing’ 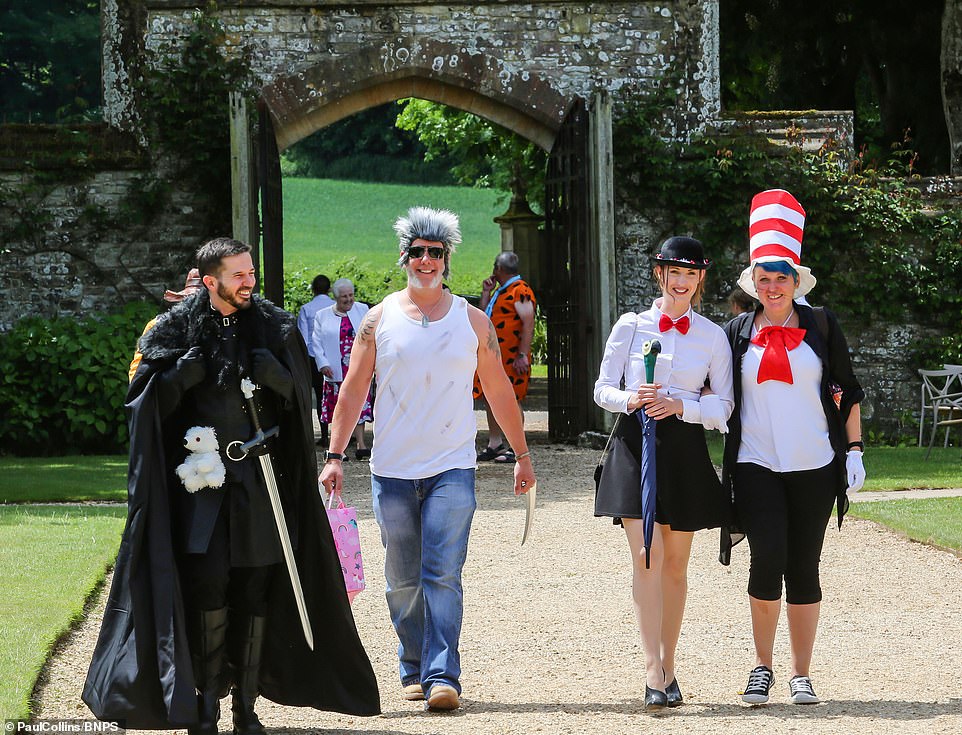 Guests beamed as they walked into the venue in Dorset, dressed as a variety of on-screen characters including Jon Snow from Game of Thrones, Wolverine, Mary Poppins and the Cat in the Hat 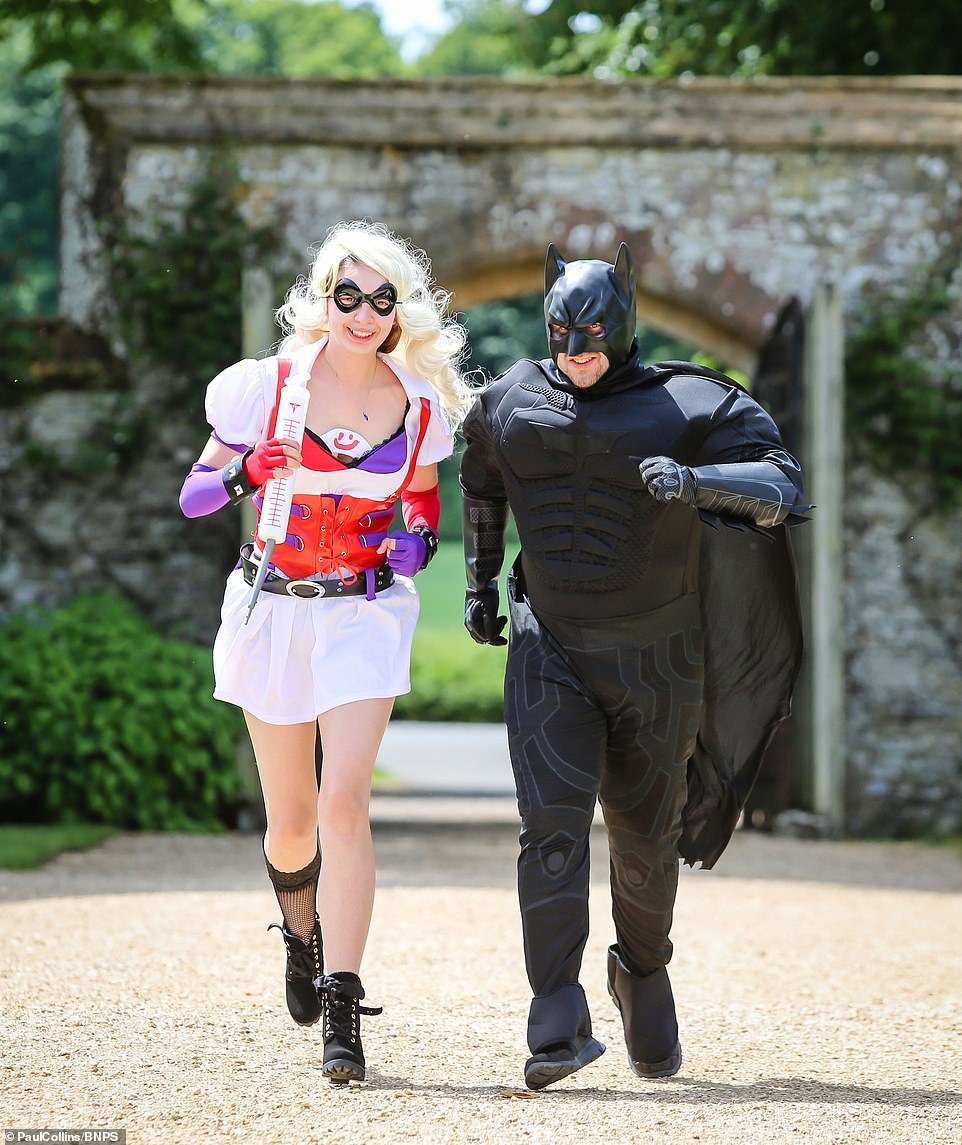 Others donned unconventional wedding outfits for the big day, including one dressed as Harley Quinn, and another as Batman 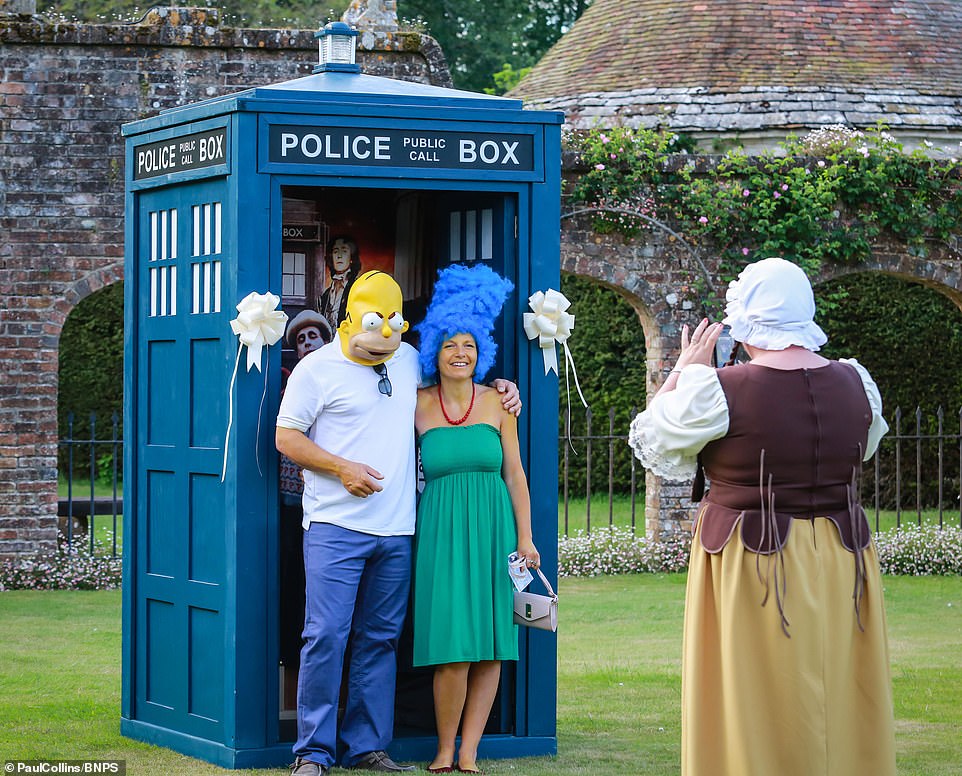 And it was all yellow: Two guests dressed as their favourite characters from TV, Homer and Marge Simpson, pose for a photograph at the Police Box prop 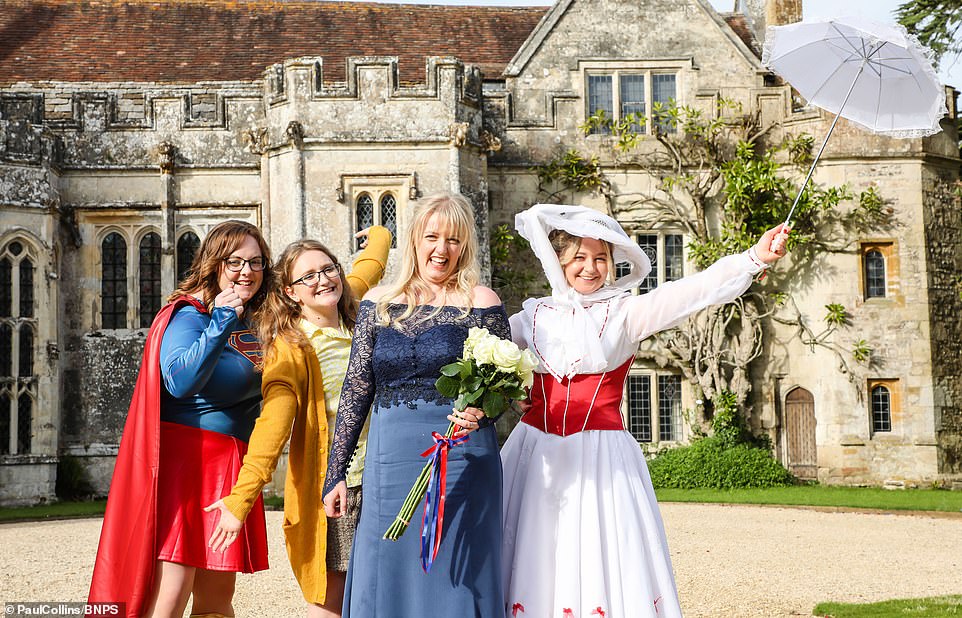 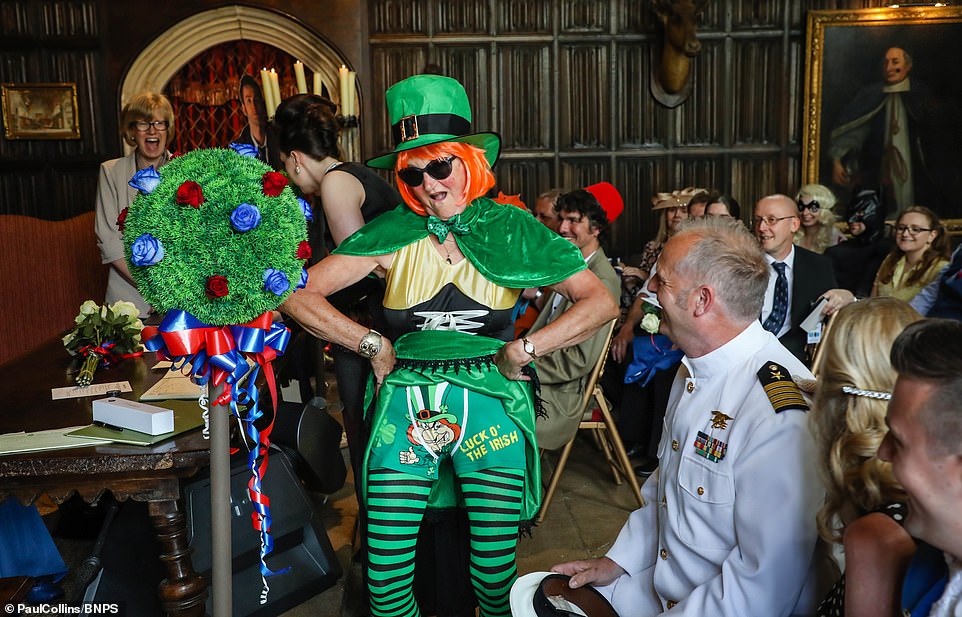 Guests larked about in their costumes inside Athelhampton House, with one who dressed as a leprechaun making others laugh

‘There were so many great costumes and everybody got into the spirit of things.

Stacey added: ‘Both myself and Simon are big TV and Doctor Who fans so it was amazing to have a day like that.’

Other guests included Professor McGonagall from Harry Potter, Rey from Star Wars and the Cat in the Hat.

END_OF_DOCUMENT_TOKEN_TO_BE_REPLACED

END_OF_DOCUMENT_TOKEN_TO_BE_REPLACED
We and our partners use cookies on this site to improve our service, perform analytics, personalize advertising, measure advertising performance, and remember website preferences.Ok