If Trump takes our Melton Mowbray pork pies, we should be OK with his chlorinated chickens, says DOMINIC LAWSON

As a descendant of the J. Lyons-owning family that introduced mass-produced food to Britain (including Wimpy hamburgers, long before McDonald’s arrived on these shores), I confess to a certain bias in favour of cheap meals for all.

Food has always been the biggest cost in the budgets of the poorest households. Easily affordable nutrition is the historic achievement of capitalism, rather than socialism, which claimed to be the answer to food poverty.

Perhaps the most extraordinary evidence of this has been the affordability of chicken: once a luxury, it is now enjoyed by almost every family.

Nowhere is as efficient at producing chickens as the U.S., where costs are about 20 per cent lower per bird than European suppliers.

It is this which, among other disputes, caused the planned free-trade deal between the EU and the U.S. to break down. European governments wanted to protect their own producers from competition from America. 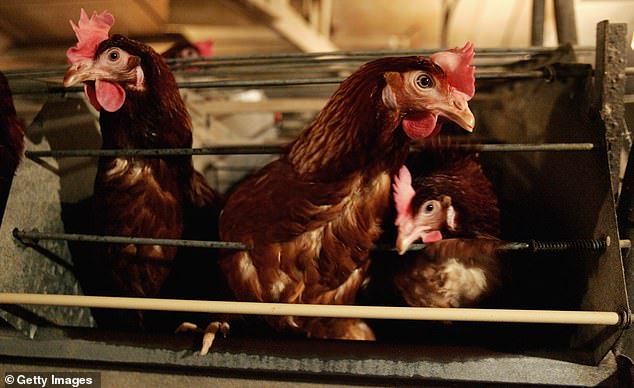 Nowhere is as efficient at producing chickens as the U.S., where costs are about 20 per cent lower per bird than European suppliers

Now it appears to be the main stumbling block to the free-trade deal that Boris Johnson wants the UK — liberated from the EU’s restrictions — to sign with our trans-Atlantic cousins. And we have our own beef, so to speak, with the Americans on food protectionism.

Ahead of his first meeting as Prime Minister with Mr Trump at the G7 summit in Biarritz, Johnson called the U.S. President and raised the subject of restrictions that the U.S. places on British farm produce.

The PM yesterday let us all know what his shopping list was in UK-U.S. trade talks: ‘Melton Mowbray pork pies are currently unable to enter the U.S. market. UK bell peppers cannot get into the U.S. market at all.’

I think we can be sure that there is nothing dangerous in Melton Mowbray pork pies or British peppers. Though any U.S. rejection would ostensibly be on grounds of ‘standards’, the real purpose would be to protect their producers. 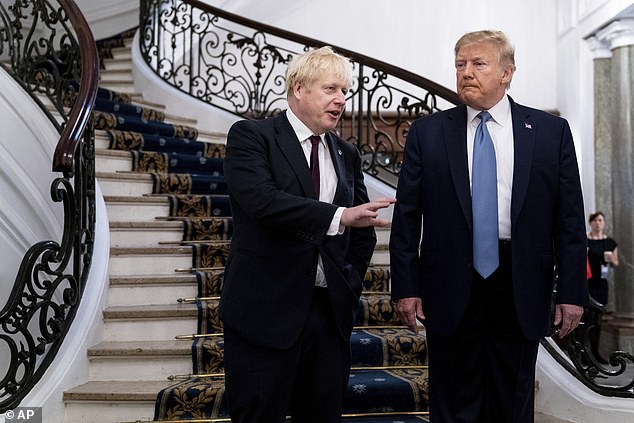 Ahead of Boris Johnson’s first meeting as Prime Minister with Mr Trump at the G7 summit in Biarritz, Johnson called the U.S. President and raised the subject of restrictions that the U.S. places on British farm produce

Exactly the same is true about British officialdom’s anathema against American so-called ‘chlorine-washed chicken’. It is protectionism masquerading as defence of public health. Those charged with the EU’s public health protection in this field long ago admitted as much.

After prolonged investigation, the European Food Safety Authority declared that treating poultry carcasses with the four anti-microbial substances commonly used by U.S. farmers ‘would be of no safety concern’. But the EU agricultural lobby still blocked it.

British consumers — who happily buy chlorine-rinsed salad from supermarkets — understand intuitively that this is nonsense. Do you know of any non-vegetarians who refuse to eat chicken when they travel to the U.S.? Does Nick Clegg? I ask only because this vehement anti-Brexiteer and former deputy prime minister said in 2017 that he had been warned by the leading Democrat challenger to Trump, the former vice-president Joe Biden: ‘We are not going to sign a trade deal that the chicken farmers of Delaware don’t like.’ 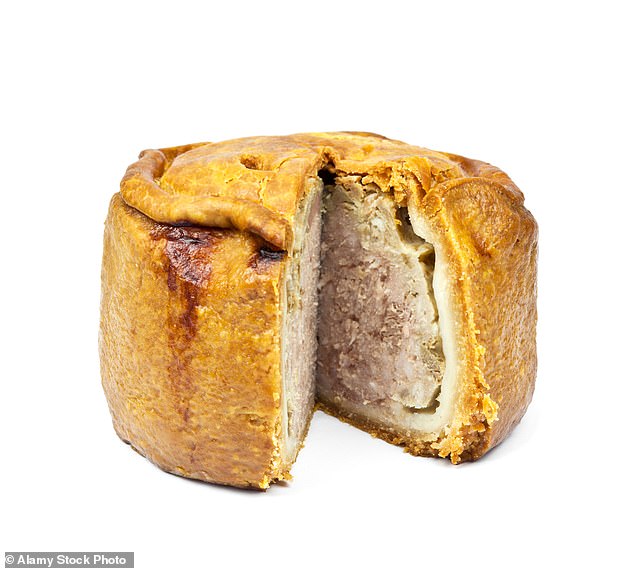 The PM yesterday let us all know what his shopping list was in UK-U.S. trade talks: ‘Melton Mowbray pork pies are currently unable to enter the U.S. market. UK bell peppers cannot get into the U.S. market at all’

Clegg concluded: ‘The chicken farmers of Delaware wash their chicken flesh with some sort of chlorine. It’s bleached, bloody horrible stuff … I suspect the good shoppers of Waitrose and Sainsbury’s and others might be a little shocked if, suddenly, they are having to eat this slightly white, chlorine-washed American chicken flesh.’

Since then, Clegg has moved to the U.S. to become the global PR man for the social media behemoth Facebook (whose effect on British media profitability is far more threatening to the UK’s fiscal bottom line than any loss to chicken farmers through cheap U.S. chicken imports).

Do you think Sir Nick (as he now is) refuses to allow his family to eat the local chicken near his new home in San Francisco? Can he really spot, or taste, the difference between that and what he would have bought in Sainsbury’s?

The more thoughtful British objectors to ‘microbially sprayed’ U.S. chicken admit that there is not the slightest additional health risk to consumers: indeed, it was revealed not so long ago that nearly 75 per cent of fresh chickens in British super-markets were contaminated with campylobacter. Each year in the UK, about 280,000 consumers are stricken with this form of food poisoning.

What they argue is that this ‘spraying’, which lasts for about two seconds in U.S. processing plants, ‘masks’ the unsanitary, intensely crowded way in which American chickens are kept.

They speak as though our own industrialised chicken farms are somehow more salubrious. If it were possible for chickens to talk, I am sure there would be no expressed envy on the part of American industrially farmed birds for their counterparts in the UK.

Our own regulations allow for up to 20 birds to be crammed into each square metre of ground (all indoors). They have more room in the oven. And because our chicken barons breed something called the Ross 308, which has been genetically designed to grow at extreme speed and with especially large breasts (British consumers’ favourite part), these birds need to be killed no later than five weeks after birth, before their relatively little legs can no longer bear their top-heavy weight.

An investigation by the Times earlier this month reported that ‘Ross 308 chickens reared by companies supplying Tesco, Sainsbury’s and Aldi are collapsing under their own weight … because they were bred to grow too quickly’.

As I said, there is a great social and financial benefit to families on small budgets in being able to buy whole chickens — and thus feed their children healthily — for just £3, which is what these fast-growing ‘factory’ birds can be picked up for in a supermarket.

But let us not pretend that the handful of companies that dominate the industrialised poultry market in this country are on a higher moral plane — or their produce healthier — than the chicken farmers of Delaware.

Besides, whatever Sir Nick says, no British consumer will ‘have to eat’ U.S. ‘chlorine-washed chicken’ if a UK-U.S. trade deal makes them available here. All food in our supermarkets is labelled by country of origin. Anyone who would rather stick to British birds will need only to look at the sticker on it.

The truth, however, is that the vast majority of Britons put value ahead of poultry welfare, whatever they say in opinion polls. This is illuminated by a single statistic: only 3 per cent of chickens bought in supermarkets are ‘free-range’.

There is a reason for this. Chickens kept in the open air, with plenty of room in which to move around, are multiples more expensive than battery farmed ones.

My wife, who was brought up on a Kentish farm, insists on buying free-range. Her most recent purchases have been from a firm called (irritatingly) Label Anglais: its owners declare that their birds ‘are a slow-growing breed of chicken carefully selected for its ability to thrive outdoors … this gives them a longer and happier life scratching around in the fields, and this is reflected in the amazing eating quality of the bird’. 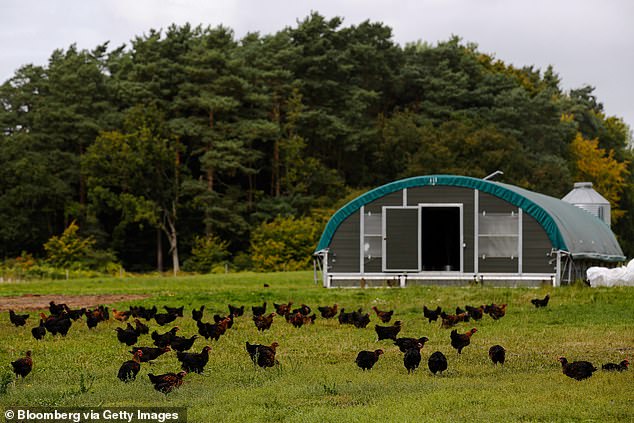 My wife, who was brought up on a Kentish farm, insists on buying free-range. I’m not sure I’d identify the difference in a blind tasting. I’d certainly notice the difference at the till: their ‘special reserve’ chicken costs £15

I’m not sure I’d identify the difference in a blind tasting. I’d certainly notice the difference at the till: their ‘special reserve’ chicken costs £15. However, we are fortunate in being able to pay the higher price. For millions of British families, that would not be the case.

This issue is much more important — and much bigger — than chicken. A full-fledged U.S.-UK trade deal would be of tremendous benefit not just to the Melton Mowbray pork pies dear to Boris’s heart and stomach, but to many other British industries — for example, our world-beating financial services.

It would be crazy to scupper it because of bogus public health scares benefitting only the far-from-innocent British battery hen barons.