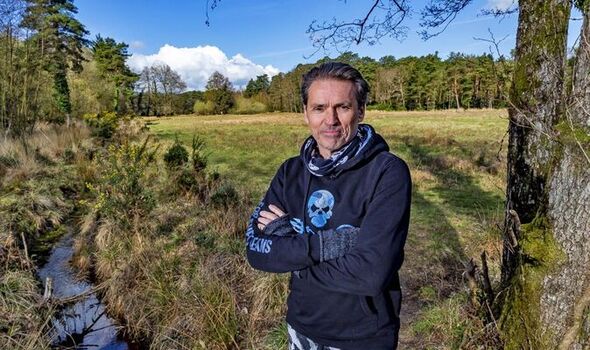 The Royal Society for the Protection of Birds and green mobile provider Ecotalk have joined with the newspaper to raise £90,000 to buy 91-acre Horse Common.

Donors have helped raise half the sum needed to make the New Forest site a haven.

Mr Vince, 61, said: “It’s also surrounded by RSPB land, so it’s like the last piece of a jigsaw puzzle. If we can buy it for them, the RSPB can create a bigger, more joined-up place for nature, with some amazing habitats.

“Our crowd-funding has raised nearly half the funds needed. We must give it another push. For the rest of December I’ll match every pound that Express readers add to this campaign.”

Chris said: “Despite the single species non-native pine plantations, a lot of wildlife is already here.As soon as the land is better managed for nature…the wildlife will bounce back.

“I am lucky enough to live in the New Forest and anything which helps to alleviate the problems it faces from overgrazing and the large number of human visitors is really important.”

The goal is for species such as woodlarks, redstarts, wood warblers and nightjars to nest at Horse Common in summer after migrating from Africa.

Butterflies such as silverwashed fritillaries, white admirals, purple hairstreaks and silver-studded blues are likely to thrive there too. Woodlands make up 14 percent of the UK, at nearly eight million acres.

The Express has called on governments and citizens to help make space for nature through our Green Britain Needs You campaign.

Mr Vince, who has backed the campaign, said: “I know the cost-of-living crisis will be making it harder for many people to donate, but making space for nature is a vital thing we need to do.”

Countries from across the world are meeting in Montreal, Canada, for the UN nature conference COP15.

Environment Secretary Therese Coffey, who is there, said: “It is not as well-known as its bigger cousin the climate COP but it is equally important – the future of the planet’s wildlife is at stake.

“We are losing nature faster than ever before, with more than one million species at risk of extinction. If we work together to make the road ahead a road to recovery then we stand not just to avoid the worst impacts of nature loss but to save precious species and secure the diversity, abundance and connectivity of life on Earth.”

HOW YOU CAN HELP: To support the cause, send cheques made payable to “RSPB” to Daily Express Horse Common Appeal, RSPB, The Lodge, Sandy, Bedfordshire, SG19 2DL or donate online via rspb.org.uk/horsecommonappeal