Emma Raducanu bags another winning deal! Tennis star, 19, is unveiled as a Porsche brand ambassador in her latest sponsorship deal – despite crashing out of a string of tournaments

Tennis golden girl Emma Raducanu added another name to her long list of high-end sponsorship deals after being unveiled as the latest brand ambassador for Porsche.

The sports star, who lives in Bromley, has had a rapid rise to A-list celebrity status following her US Open triumph last September, and has since been invited to be ambassador for an array of luxury brands.

The teenager wrote tennis history at the US Open last year before a sensational winning run in New York enabled her to become the first ever qualifier to win a Grand Slam tournament.

Now, the 19-year-old Briton will be one of the new faces of the car manufacturer as the brand released snaps of the tennis star posing in front of the £150,000 Porsche 911.

This is despite a string of recent setbacks, including crashing out of Indian Wells last week in the third round due to a ‘stiff back’, after a spate of other fitness issues. 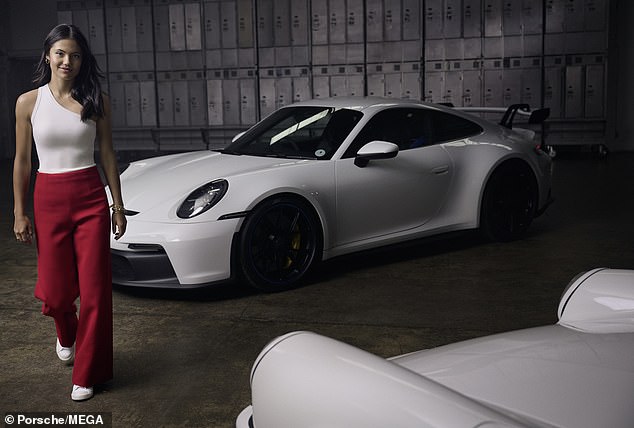 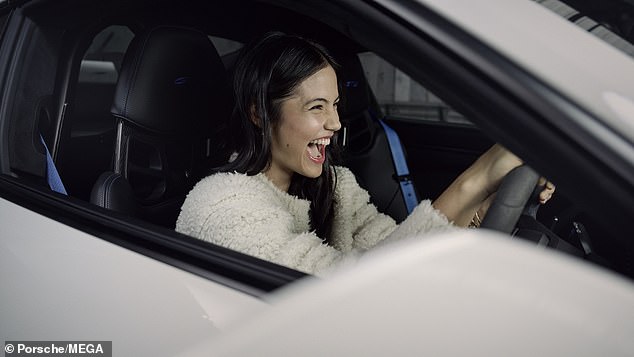 The sports star, who lives in Bromley, was seen behind the wheel of her ‘favourite’ car, the £150,000 Porsche 911 as the car manufacturer announced the deal today

The world No 13 suffered a hip injury in a marathon match against Australia’s Daria Saville in the WTA 250 tournament in Guadalajara, Mexico, last month.

Raducanu also revealed she was ill when losing in the quarter-finals of the Transylvania Open to Marta Kostyuk, claiming she felt ‘quite tired and lethargic’ during the match against the Ukrainian.

Her injury problems have also extended to Grand Slam tournaments too, with blisters hampering and ultimately contributing to her second-round defeat at the Australian Open to Danka Kovinic.

A bout of coronavirus also disrupted her first proper pre-season after winning the US Open last year, becoming the first British woman to win a Grand Slam singles title since Virginia Wade at Wimbledon in 1977. 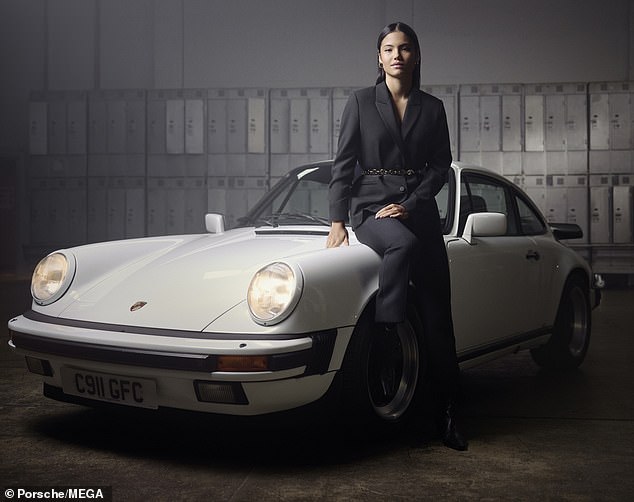 The 19-year-old Briton will be one of the new faces of the car manufacturer as the brand released snaps of the tennis star posing in front of the £150,000 Porsche 911

As her new partnership was unveiled today, Emma said: ‘For me to be a brand ambassador for Porsche means a lot. Porsche is one of the brands I’ve always loved from a young age.’

An avid motorsport fan, Emma tried her hand at go-karting and dirt biking growing up, but decided to put the passion on hold in order to focus on her blossoming tennis career.

‘When I was younger I remember the Porsche Grand Prix was always a big tournament and a very different a unique tournament be cause the winner would get a Porsche. That was always very special’, she said.

‘Growing up, I would go to Brands Hatch and watch the Porsche Carrera Cup finals. The adrenalin I would get from motorsports and seeing the Porsches was actually the most fun part of my week. 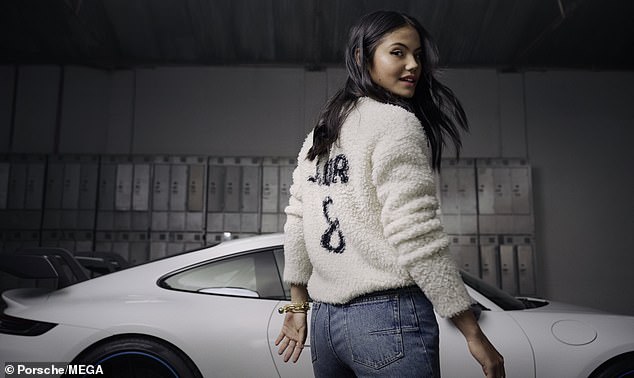 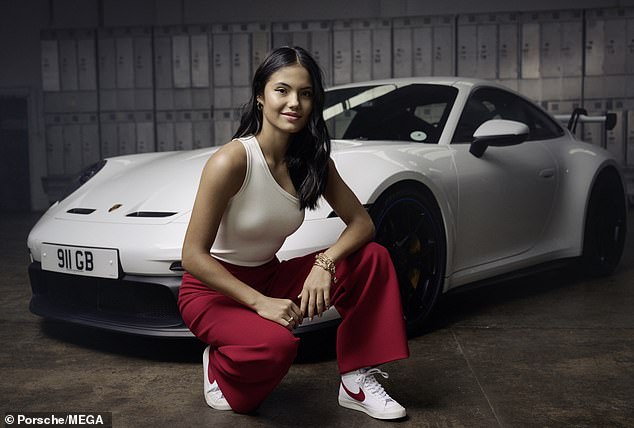 The tennis golden girl donned Nike trainers, red flared trousers and a white halter top as she posed in front of the Porsche

The tennis star says the Porsche 911 is her favourite car, recalling one of her early coaches driving to training in the ‘iconic’ vehicle.

‘One of my first tennis coaches drove a 911’, she said. ‘Whenever I would turn up to practice in the morning, I would see his Porsche, I would go wow and be like dreaming of one day sitting in my own.

‘My favourite car is the 911 for sure. Throughout the generations it’s so unique and beautiful in every way. I feel like it’s one of the most iconic cars that are out there.’

‘It’s really important for me to align with partners and brands that I really feel passionate about and that I identify with. 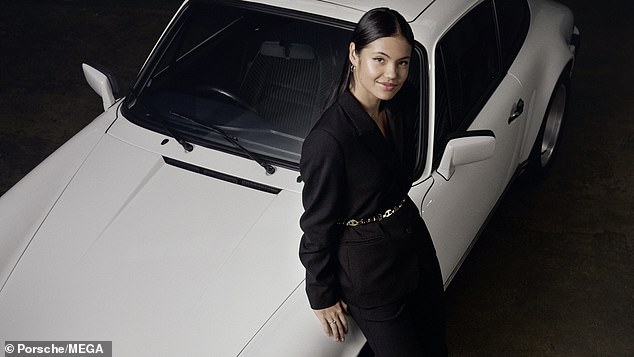 The tennis star donned a chic black oversized suit paired with a dainty silver belt as she posed in front of the £150,000 Porsche 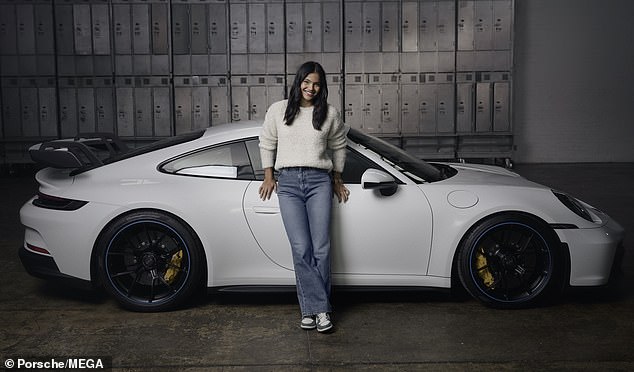 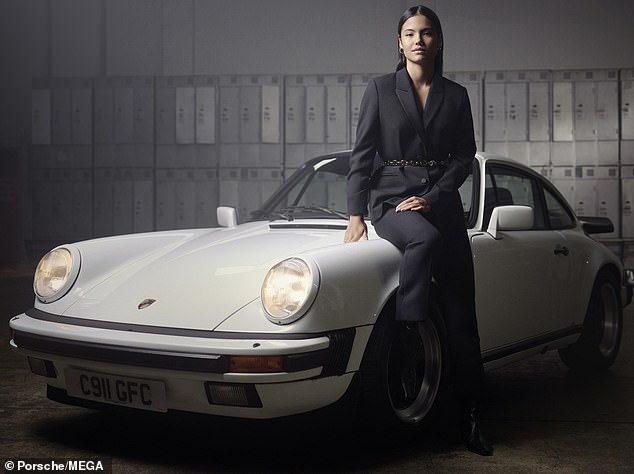 The tennis star says the Porsche 911 is her favourite car, recalling one of her early coaches driving to training in the ‘iconic’ vehicle

‘I think this partnership with Porsche is incredible and obviously I m really excited to see what sort of exciting things we can do going forwards.’

Oliver Blume, Chairman of the Executive Board at Porsche AG said: ‘We’re delighted to welcome Emma Raducanu in the Porsche family as a Brand Ambassador.

‘She embodies not only a new generation of strong and self-confident players but, as a personality, is also an inspiration and role model beyond the realms of her sport for young women all over the world.

Raducanu gained celebrity status with her maiden Grand Slam win at Flushing Meadows, with brands lining up to offer her sponsorship deals and a host of magazines featuring her on the front cover.

Since winning in September, the teenager has announced deals with:

‘Through her own life, she exemplifies that one can achieve one s goals if one believes in oneself and is prepared to work hard. She s therefore an excellent fit for Porsche and the values for which the company stands.’

Raducanu gained celebrity status with her maiden Grand Slam win at Flushing Meadows, with brands lining up to offer her sponsorship deals and a host of magazines featuring her on the front cover.

Days later she found herself among the A-list elite at New York’s Met Gala – the biggest night in fashion.

She rose to the occasion in a stunning midriff-baring, monochrome Chanel outfit complete with pearls encircling her waist and Tiffany diamonds in her ears.

Personally invited by Vogue chief Dame Anna Wintour, she was seated on the $500,000 Chanel table with its celebrity ambassadors – prompting speculation she would join their ranks as an ambassador.

Meanwhile, the teenager was then revealed as the face of jewellery brand Tiffany and Co in a deal estimated to be worth more than £2million.

In October, she became the latest celebrity to be announced as an ambassador for high-end fashion house Dior.

In the role, the teen will represent Dior Creative Director Maria Grazia Chiuri’s womenswear collections as well as the luxury brand’s skincare and make-up ranges. It is not known how much Emma will be paid for her role as an ambassador for Dior.

She has since scooped deals with Evian and appeared as the face of Sports Direct’s 2021 Christmas campaign.

The tennis star has been heralded as a ‘sponsor’s dream’, and is on course to become the highest earning female sports star of all time.

It was also reported that she laid the groundwork for her potential earnings aged 17, registering Harbour 6 Limited to manage her finances.